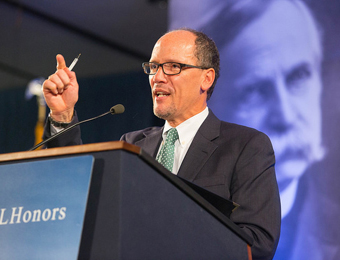 Secretary Perez with an image of Carroll D. Wright

Commissioner Groshen said of the first BLS Commissioner, "Wright set the standard that this new agency [Bureau of Labor] would limit itself to factual investigation and eschew propaganda. He was reappointed by presidents Cleveland, Harrison, McKinley, and Teddy Roosevelt. ... Above all else, Carroll Wright was ahead of his time. He initiated studies and reports that looked at the status and conditions for working women as far back as 1888—before anybody used the term working women. ... But many think his [Commissioner Wright's] greatest accomplishment was the establishment of the principle that the Bureau would be devoted to in the future: the fearless publication of the facts." 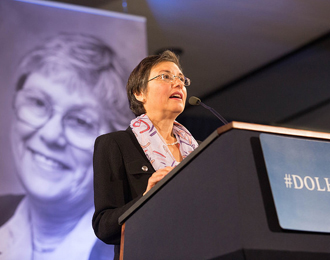 Commissioner Groshen with an image of Janet Norwood

Speaking of Commissioner Norwood, Groshen said "Janet modernized the BLS and made it a model workplace—and not just within the federal system. She was an advocate, ambassador, and head cheerleader for the BLS employees, elevating the role of statistician in BLS to improve the quality of our indicators. Over 30 years ago, the Washington Post described her this way, 'Objective, methodical, unflappable under sometimes hostile Congressional questioning, Norwood measures our prosperity and tells the man in the street whether the next line he stands in is likely to be the bank teller window or the unemployment office.' "

Bernard Norwood, husband of Janet Norwood, noted that Commissioner Norwood was also appointed by more than one president: "She was appointed to be U.S. Commissioner of Labor Statistics by presidents of both political parties, Jimmy Carter and Ronald Reagan, and served as Commissioner under them ... as well as under, I believe, 8 Secretaries of Labor. Very different people, but all of them appreciative and supportive."

Referring to both commissioners, Groshen spoke of their most important accomplishment, " ... they [Commissioners Norwood and Wright] made a world of difference to work, workers, and workplaces across our country." Federal Reserve Chair Janet Yellen added, "This legacy lives on in the agency Carroll Wright founded. And few of his successors did as much to advance this principle as Janet Norwood." Yellen continued, "The Bureau of Labor Statistics is exceptional. And in that way, I hope it serves as an example of how effective, reliable, and trusted government can be."

Secretary of Labor Thomas Perez summed it up, "I think the currency of the Bureau of Labor Statistics, the currency of our sister agencies who do similar work, is presenting the facts and nothing but the facts."

Video: There's a Stat for That

The work of today's Bureau of Labor Statistics and its relevance to Americans of all kinds is highlighted in this video that was first shown at the Labor Hall of Honor induction for Commissioners Wright and Norwood.