Interview with a ...
Firefighter

Education and training typically required: Postsecondary nondegree award, plus long-term on-the-job training. Gaining experience as a volunteer firefighter may help in getting a job as a career firefighter.

Tell me a little bit about your job.

I’m part of an elite, all-Native American, wildland firefighting crew called the Geronimo Hotshots. We fight wildland fires across the United States, often in remote areas. Our season starts about March or April and ends in September. During that time, we’re on call.

How do you fight wildland fires?

We’ll hike for miles or jump in a helicopter that takes us to where the fire is. Then we cut brush and trees and scrape vegetation and debris. We’re the “ground pounders,” making a fire line to keep a fire from spreading.

Every fire is different. Sometimes we do a “backfiring,” burning fuel in front of the fire to create a buffer to stop the progression. This is usually done at night when the fire is low intensity. There are some places we can barely touch because we don’t want to damage the land. It all depends on the forest.

Why did you want to become a wildland firefighter?

The first time I saw the Hotshots crew, they were all lined up single file, military style. They all rode in same-colored vehicles and were unified and professional. They were there in the smoke, front and center. I told myself I wanted to get on that crew.

For people in San Carlos, it’s in their blood, in their veins. They love the job. My father was a wildland firefighter. He was one of my inspirations.

Describe your first experiences as a firefighter.

My first firefighting job was as a brush truck engine operator, driving an off-road firetruck to areas that larger firefighting equipment couldn’t reach. Then I was on a training crew in Nevada for a few seasons. After that, I applied to the Geronimo Hotshots. I was hired as a crew member, and I’ve been with them ever since.

I remember fighting my first fire. After my shift, I thought, “Wow, is this what’s going to happen every day?” It was so exhausting. I remember thinking, “I don’t know if this is for me.” But I have two daughters, and I thought, “I’m not doing this only for myself, I’m doing it for my family.” And that kept me going every day.

I received Firefighter of the Year that first year. That helped me to know a really good part of me belonged there, fighting fires.

What are your biggest challenges?

When you’re out there, experiencing the fire firsthand, 50 or 100 feet away, there’s an adrenaline rush. It’s coming toward you, and you think, “What am I doing here?” You think, “Am I being safe?” That’s when you count on your squad leaders, the people on the crew who have more experience. You must trust their judgment.

Being out there in the forest, being out in nature. Travelling, seeing different areas of the country, and being on the road. And just doing the work and having that feeling at the end of a day when you pat each other on the back, saying, “It’s a good job.”

How does someone become part of a wildland firefighting crew?

It’s not easy. There are a lot of people who apply, but all crews are different in terms of the hiring process. The first thing is that you must be in top shape physically.

Here, crew members have to have their basic wildland fire training and undergo a physical fitness test. In the morning, we run 7 or 8 miles, and then in the afternoon they might say, “Okay, let’s hit the mountain and climb up it.” And that can be a real drain, especially carrying heavy packs with all our gear and tools.

You can be eligible to work in our program with at least 6 months of training or wildland experience. But you’ll also want to go out and meet people on the crew, talk to them. And even after you get your foot in the door, that’s only part of getting on a crew. It’s not just about being physically fit but also mentally fit.

What do wildland firefighters do during the off season?

Some of us work year round, organizing things like background checks, clearance with the human resources department, or budgeting.

Seasonal crewmembers work for 6 months. During the rest of the year, some go to school. Others work in jobs like construction or cutting timber. They work things out with their employer so that they can go back during our off season.

How do firefighters advance?

There’s a career ladder here. Each year that passes, you gain experience that helps you move up to leadership positions, from crewmember to senior firefighter, then to squad leader, foreman, and superintendent.

You take various training to advance. But after squad leader, the only way to get a higher position, like foreman or superintendent, is if someone retires or resigns.

What’s your best advice for someone who wants to be a wildland firefighter?

The best thing to do is look online, find out what the qualifications are with different agencies, and apply early. By the time fire season is over, most crews are looking for people to apply. And for these jobs, specifically, be physically active and take the basic wildland fire training and physical fitness test.

What are your future career plans?

I’m really where I need to be right now. Especially being on a Native American Hotshot crew in San Carlos, there are a lot of people here in the community who look up to us. I would like to help the program continue to thrive. I want this program to be around for a long time. 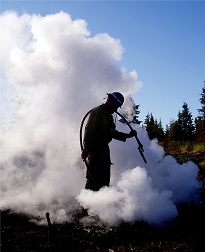