You’re a what?
Insectary manager

To most of us, insects are pests. But not to George Keeney. “I live, breathe, and eat insects,” he says.

George is an insectary manager for Ohio State University’s Biological Sciences Greenhouse in Columbus, Ohio. It’s his job to raise and care for more than 130 insect species and to help oversee the insectary, a special greenhouse filled with insect colonies. Thanks to George’s efforts, the insects are made available for research, education, and other purposes.

Insectary managers’ work is all about arthropods—that is, invertebrates that include insects. The focus of their work depends on the purpose of the colonies they oversee. For example, George raises insects for use in research and in teaching about arthropods and their habitats. Other insectary managers raise insects for agricultural uses, such as to eat problem insects that damage crops. Still others raise them for healthcare applications, such as creating vaccines for insect-borne diseases.

Duties vary by specialty. But these managers usually have some common tasks related to care, research, and outreach.

Care. Successful insectaries produce a living supply of insects that can be reintroduced into the environment or used for experiments. Managers like George understand the different types of care their colonies require.

For example, some insects, such as cockroaches, need only food, water, and a hiding place. But others require special nutrients and conditions in order to thrive. “Recognizing each insect’s specialized needs is important to keeping a colony thriving,” says George. He and his student helpers check on their insect colonies at regular intervals, replacing their food and water sources.

In addition to helping the growth of insect colonies, these managers also monitor the number of insects and respond to problems a colony may have. For example, this might mean culling insects in colonies that get too large. And they must keep their insectary clean to provide a hospitable environment.

Research. Insectary managers may help scientists with research projects. Research on insects is important because they’re a crucial part of many ecosystems: they aerate soil, pollinate crops, and are a vital food source for other organisms. George assists one project by rearing stinkbugs as a food source for predatory wasps, allowing researchers to understand the genes responsible for the wasps’ behavior.

Along with aiding research projects, insectary managers study on their own to keep abreast of developments or to learn about new topics. For example, each time George receives a new species to raise, he learns everything he can about it, usually by researching at the university library. 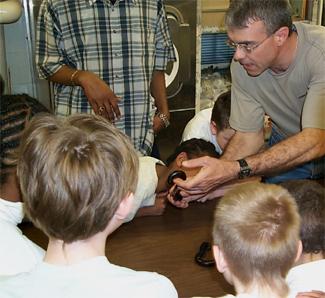 Outreach and other duties. Some insectary managers engage in educational outreach, such as guiding tours, to spark an interest in ecology. In showing his insectary to the public—including the more than 800 elementary school students who visit each semester—George explains how the insects interact with the environment. He also helps to coordinate a summer program that focuses on the study of mites and ticks.

Insectary managers who raise insects to be released into the environment might work outside their greenhouses. For example, one of George’s fieldwork projects is helping Ohio reintroduce the American burying beetle, a critically endangered species. After raising the insects, George oversees their release into the wild, making sure the insects can survive in their new habitat. Other insectary managers might visits farms to disburse insects for aiding plant growth, such as providing ladybugs to consume aphids that would otherwise eat crops.

How to become one

Insectary managers typically need a bachelor’s or master’s degree in a science field, such as biology. They also should have certain qualities and skills before embarking on a bug beat.

Qualities and skills. Above all, these workers must not be squeamish around insects. This includes being interested in and able to handle insects and their byproducts. “You can’t be afraid to get your hands dirty,” says George. Experience in animal care might help prepare would-be managers for tending to millions of insects.

Insectary managers also need interpersonal and communication skills, especially if they deal with the public. For example, George must be able to explain insect characteristics to others, either by talking directly with students or by giving presentations to outside groups. “Meeting interesting people who are also interested in insects is one of the best parts of the job,” he says.

Education. At a minimum, insectary managers need a bachelor’s degree in biology or a related field. Many workers also have a master’s or advanced degree with a focus on entomology. At any of these levels, participating in research projects or in writing grant proposals are two activities that may be helpful for future research as an insectary manager.

According to the Entomological Society of America, about 20 colleges and universities offer bachelor’s degree programs in entomology. But George advises students that a degree in biology, not necessarily in entomology, is sufficient so long as it includes a focus on insects and their care. George has a bachelor’s degree in biology that included coursework in horticulture and entomology.

Insectary managers usually work about 40 hours a week, although ensuring that living organisms are watered and fed may include scheduling those hours over weekends or holidays. And George generally takes his vacations during the academic year, when student help is available to provide care in the insectary during his absence.

The insects these managers care for may change with the seasons, and that variety keeps the job interesting. But running an insectary is not without hazards. Insectary managers may come into contact with allergens or other hazardous materials, and they may be bitten or stung by the insects in their care. They may need to wear protective gear, depending on the insects they work with or the tasks they’re doing. For example, George wears a dust mask, latex gloves, and a lab coat when he works around insect byproducts to avoid developing an allergy or spreading disease.

The U.S. Bureau of Labor Statistics (BLS) does not collect data specifically on insectary managers. Instead, BLS counts these workers among zoologists and wildlife biologists, of which 17,720 were employed in May 2016. The median annual wage for zoologists and wildlife biologists was $60,520 in May 2016, more than the median annual wage of $37,040 for all workers.

But George’s interest in the colonies under his care extends beyond a mere working relationship or the money he earns. “In a way, I feel like a parent,” he says. “Some of the colonies have been here since I started over 30 years ago. And as we get new species, I expect that there will be many more mouths to feed.”

Allen Chen is an economist in the Office of Occupational Statistics and Employment Projections, BLS. He can be reached at 202-691-5868 or chen.allen@bls.gov. 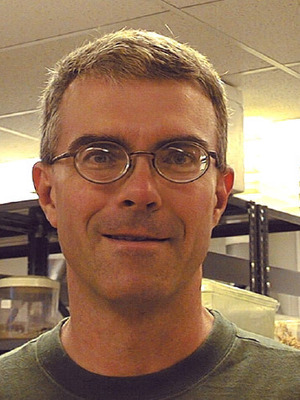 You're a what? Ornithologist