If you play Animal Crossing: New Horizons, you probably keep busy doing many activities on your island. Now, imagine how your Animal Crossing bank account would swell if you actually got paid for all that work.

Animal Crossing: New Horizons is a popular life-simulation video game that finds you and a gaggle of lovable animal friends moving to a desert island. In playing the game, you do all the work necessary to improve your island, such as tending the land, building structures, and planning neighborhoods. In real life, the U.S. Bureau of Labor Statistics (BLS) has a stat for that: it collects data on nearly a dozen occupations involved in completing those tasks.

Of course, in real life you don’t get paid for the work you do yourself on your own home or land. This article is simply a fun way to identify the occupations in the game and calculate their earnings with 2019 median wage data from the BLS Occupational Employment Statistics (OES) program. (The median is the point at which half of workers in the occupation earned more and half earned less.) It considers occupational wages of some of the island characters, too.

Keep reading for a closer look at just how valuable your Animal Crossing island work might be. You can calculate your wages per minute with a worksheet at the end. 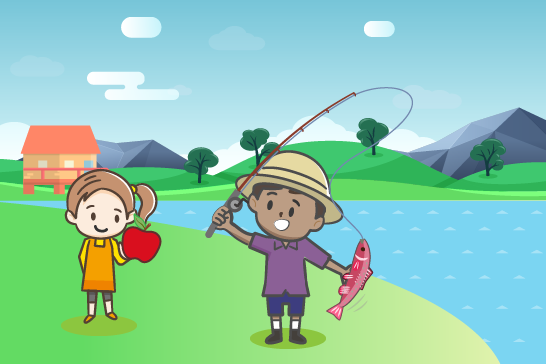 Your play, for pay

From keeping your island clean to decorating your home, your virtual work in the game matches to several occupations in real life.

Getting your virtual hands dirty

One of your first tasks after arriving at your overgrown island home is to tidy it by picking weeds and gathering sticks. Later, with a shovel in hand, you plant flowers, bushes, and trees. If you’re aiming for the game’s rare blue rose, you also water your flowers daily. Workers who perform similar duties are typically categorized as landscaping and groundskeeping workers. Their median wage was $14.63 hourly, or $30,440 annually, in 2019.

Soon, you will have planted too many trees and will want to cut down some of them to expand housing or to craft furniture. An ax makes quick work of chopping trees on your fictional island. In real life, fallers use axes or chainsaws to cut down trees. Fallers also use their expert knowledge of tree characteristics and cutting techniques to control direction of the drop and to minimize tree damage. They earned a median wage of $21.46 hourly, or $44,650 annually.

A daily task on your virtual island might include hitting a large rock with a shovel to find chunks of stone, clay, iron, or gold. In reality, ore and coal mining workers primarily use much larger equipment than a trusty shovel. Continuous mining machine operators had a median wage of $26.58 hourly, or $55,280 annually.

Creatures past and present

You wield your shovel for more than just planting and mining on your island. You also use it for excavating fossils to deliver to your island’s museum. Paleontologists are a type of geoscientists who study dinosaur fossils. Geoscientists had a median wage of $44.25 hourly, or $92,040 annually.

Another handy tool for island work is a net to catch pesky ants, fleas, wasps, and other insects and arachnids. Typically, those who remove pests from buildings and surrounding areas are counted among pest control workers—and they’re more likely to use equipment such as baits, traps, and sprays than a net. Workers in this occupation earned a median wage of $17.95 hourly, or $37,330 annually. 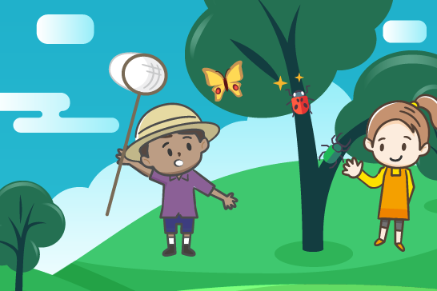 In the game, a few pieces of wood or sticks are all you need to craft most flimsy tools. You can add durability to your tools with a chunk of iron. You’re also a menu click away from building wood or metal furniture, as long as you have all the required materials and a workbench. In reality, each of these specializations represents an occupation.

Workers who build wooden furniture are typically categorized as cabinetmakers and bench carpenters. These woodworkers cut, shape, and assemble products such as furniture and earned a median wage of $17.21 hourly, or $35,790 annually.

Metal work is not normally done with a hammer, as depicted in the game. Welders, cutters, solderers, and brazers use torches, lasers, and other handheld and electronic equipment to shape metal pieces for creating a variety of products. These workers had a median wage of $20.43 an hour, or $42,490 per year.

In the game, it’s easy to turn a stack of rocks or clay into brick or stone fencing or other stone furniture. In the real world, brickmasons, blockmasons, and stonemasons follow blueprints or other drawings, lay out patterns, and use a variety of tools to construct stone or concrete structures. Their median wage was $24.79 hourly, or $51,550 annually.

Designing your home and island

Your first home on your virtual island is a tent. In time, you’ll have a 6-room house to decorate in any way you choose with furniture and accessories, including rugs, plants, and art. Interior designers are workers who plan, design, and furnish interiors of residential, commercial, or industrial buildings; they had a median wage of $26.94 hourly, or $56,040 annually.

You control your island’s layout, from the location of houses and shops to sites for roads and bridges. With nearly unlimited options, your island can become as organized or haphazard as you like. In real life, urban and regional planners typically must work within the bounds of zoning ordinances, building codes, and environmental regulations to devise strategies and programs for community development. Their median wage was $35.75 an hour, or $74,350 per year. 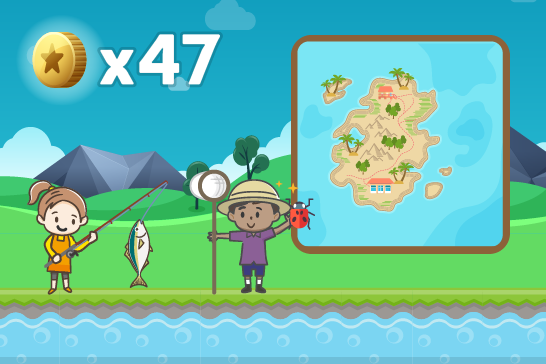 What would other islanders earn?

Most of the island characters appear to spend their days relaxing, fishing, and catching butterflies. However, a few have specific occupations.

Blathers, the beloved owl who’s a collector of bugs, fossils, fish, and artwork, would be categorized as a curator. Workers in this occupation oversee collections, such as artwork, collectibles, historic items, or scientific specimens for museums or other institutions, and may do instructional, research, or public service activities. They had a median wage of $26.24 an hour, or $54,570 per year.

Flick, the insect-loving chameleon, makes lifelike replicas of bugs and fish for you. Fine artists include painters, sculptors, and illustrators who create original artwork using a variety of media and techniques. Workers in this occupation earned a median wage of $24.30 hourly, or $50,550 annually.

K.K. Slider, a Jack Russell Terrier, visits your island every Saturday night to play a concert. Playing an instrument and performing in front of live audiences would categorize him as a musician and singer. In this occupation, workers had a median wage of $30.39 hourly.

Label is one of a trio of hedgehog sisters and works as a fashion designer. Like her real-life counterparts, Label sketches designs and creates original clothing and accessories. Across all industries, fashion designers had a median wage of $35.48 hourly, or $73,790 annually.

Mabel, the friendly sister of Label and Sable, and raccoons Timmy and Tommy Nook greet you upon arrival to their respective stores and assist you throughout your visit. Retail salespersons, their real-world counterparts, had a median wage of $12.14 hourly, or $25,250 annually.

A few islanders working in traveling sales, including boar Daisy Mae, camel Saharah, sloth Leif, and skunk Kicks, offer items from their mobile carts or backpacks. Their occupation typically includes door-to-door sales workers, news and street vendors, and related workers. These workers had a median wage of $13.19 an hour, or $27,420 per year. 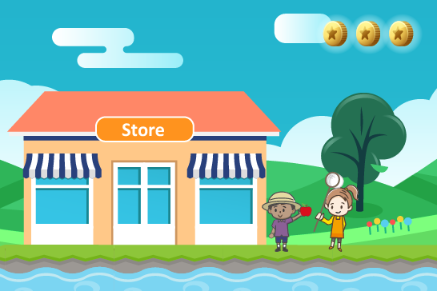 CJ is a beaver who loves to fish. While he’s often available to vlog about your fishing activities, he’s primarily responsible for organizing and managing the quarterly fishing tournament. CJ would be considered a meeting, convention, and event planner. In the real world, these workers coordinate the activities of staff, convention personnel, or clients to make arrangements for group meetings, events, or conventions. Meeting, convention, and event planners had a median wage of $24.33 hourly, or $50,600 annually.

For travel to other virtual islands, dodo brothers Orville and Wilbur help get you where you need to go. Orville staffs the airport check-in desk, ensuring that you have the right ticket for your desired destination; Wilbur pilots the plane. Reservation and transportation ticket agents and travel clerks, Orville’s counterparts in real life, had a median wage of $18.45 hourly, or $38,380 annually. Wilbur would be counted among commercial pilots of fixed-wing aircraft on nonscheduled air carrier routes, an occupation with a median wage of $86,080 annually.

Tom Nook, a reprehensible raccoon, sells land to you and then later profits from reselling it with your improvements. He would be considered a property manager. In real life, the occupation isn’t shady; these workers plan, direct, or coordinate the selling, buying, or leasing of real estate. Property managers had a median wage of $28.25 hourly, or $58,760 annually.

Last, but not least, anyone who has played the game knows that Isabelle the Shih Tzu probably does everything that’s happening behind the scenes. Her obvious responsibilities include neighborhood relations and island rating, but she also does things like formulate policies, direct daily operations, and plan the use of materials and human resources. Because Isabelle’s duties are so diverse, she would be counted among general and operations managers. This occupation had a median wage of $48.45 hourly, or $100,780 annually.

Additional detail, including employment and wage data by metropolitan area, is available from OES for all the occupations discussed in this article.

Although the article captures many activities of daily Animal Crossing life, a few occupations are left out. A number of tasks don’t translate well to actual occupations, although wouldn’t it be a fun job to roam the beach picking up star fragments each morning after wishing on shooting stars all night? And some characters’ work is not detailed enough in the game for OES to classify. For example, as agreeable as it would be to take a seagull at his word, Gulliver hasn’t done anything to prove he’s a sailor.

Farming and fishing occupations were not discussed because the OES program does not publish data for most occupations in the agricultural sector. For more information about those occupations, as well as the occupations included in this article—and hundreds of others—visit the Occupational Outlook Handbook. 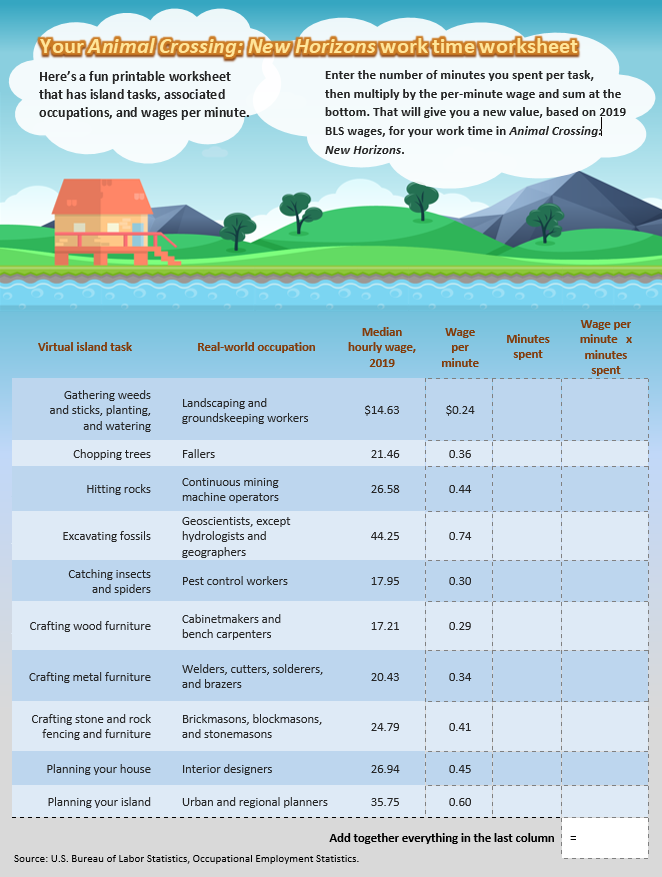 Elizabeth Cross is an economist in the Office of Occupational Statistics and Employment Projections, BLS. She can be reached at cross.elizabeth@bls.gov. 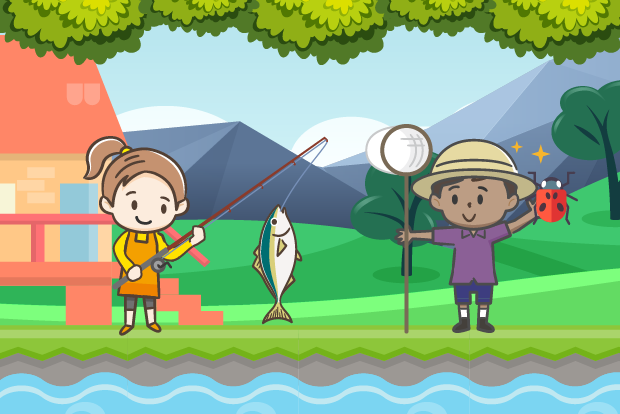 Wages and projected openings by occupation

The Game of Life versus real life