Perhaps you enjoy working with your hands on projects that will be around for years to come. Or maybe you’re looking for a job that pays well and has a promising future. These are among the many reasons to consider a career in construction.

In June 2018, there were 263,000 job openings in the construction industry, according to preliminary estimates from the U.S. Bureau of Labor Statistics (BLS). Through 2026, BLS projects faster-than-average employment growth in the industry. What’s more, its median annual wage of $45,820 in 2017 surpassed the $37,690 median wage for all industries.

And although some occupations in the construction industry typically require a college degree, you can enter many others with a high school diploma or less education. Read on to learn about construction careers.

Preliminary BLS data show that there were 7.2 million construction jobs in July 2018. That marks the highest employment level for the construction industry in a decade.

Leading into and through the Great Recession, the industry experienced declines in employment. In recent years, however, employment has trended upward. (See chart 1.)

BLS expects continued expansion of employment in the construction industry, with more than 7.5 million jobs projected by 2026 as population growth spurs demand for new buildings and infrastructure.

Specialty trade contractors is the largest construction subsector, with employment projected to reach nearly 4.8 million by 2026. Workers in this subsector usually focus on a particular activity, such as plumbing or roofing. (See table 1.) 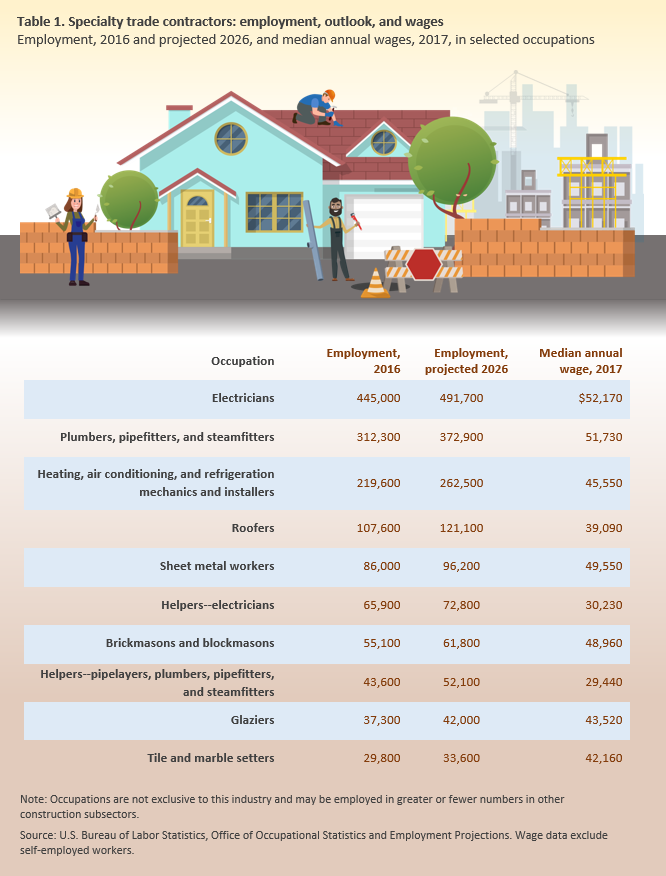 BLS projects rapid employment growth in specialty trade contractors for all of the occupations in the table. With nearly 20-percent increases in this subsector, employment of heating, air conditioning, and refrigeration mechanics and installers and helpers of pipelayers, plumbers, pipefitters, and steamfitters is projected to grow the fastest of these occupations. Electricians had the highest median annual wage, $52,170, in this subsector in 2017.

Employment in construction of buildings is projected to be about 1.7 million in 2026. This subsector includes general contractors and other establishments that have primary responsibility for an entire building or remodeling project. (See table 2.) 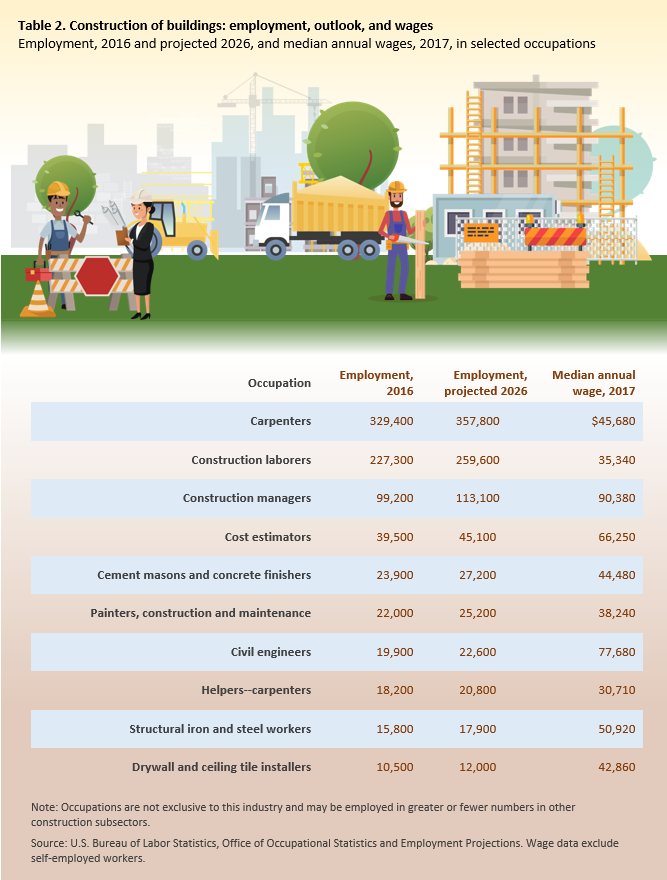 Heavy and civil engineering construction focuses on highway, utility, and other infrastructure projects; employment in this subsector is projected to be almost 1.2 million in 2026. Table 3 shows some of the occupations involved in this work. 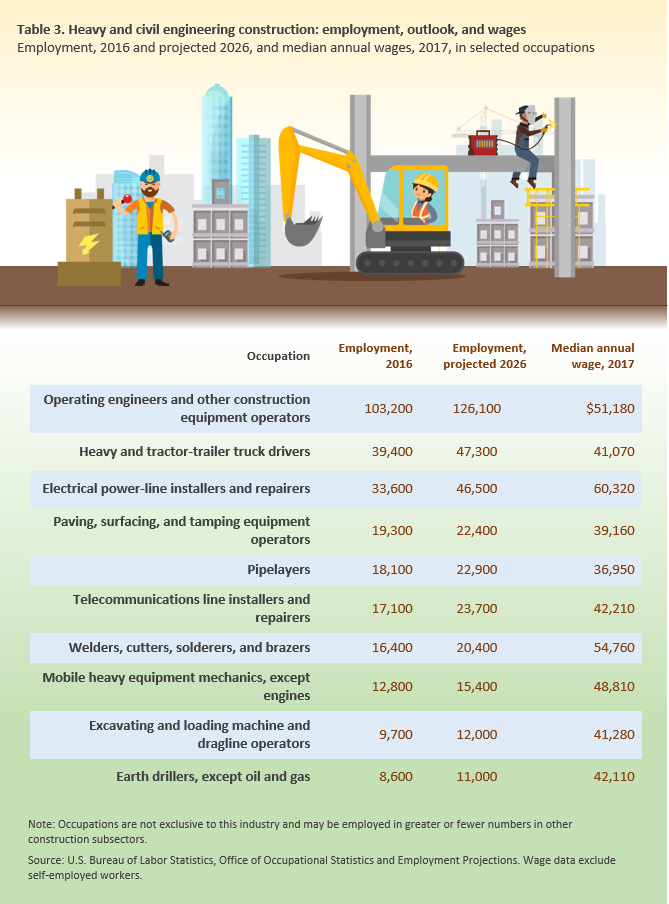 BLS projects much-faster-than-average employment growth in heavy and civil engineering construction over the 2016−26 decade for the occupations shown in table 3. Employment growth of electrical power-line installers and repairers is expected to be the fastest, with a projected increase of nearly 39 percent in heavy and civil engineering construction. These installers and repairers also had the highest median annual wage, $60,320, of occupations shown in the table.

Paving the way to a career

Most construction careers require specific skills and aptitudes, such as dexterity, physical stamina, and problem-solving ability. Construction workers learn many of the skills they need on the job. In fact, all but one of the occupations shown in the tables typically require on-the-job training for workers to become competent.

Apprenticeships are common in some occupations, such as sheet metal workers and plumbers. In other occupations, new workers may get informal on-the-job training, including instruction from those who have experience. 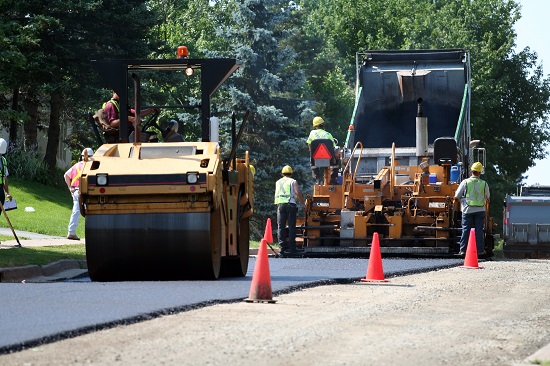 Whether you have little formal education or you aspire to earn a college degree, you can choose from a number of occupations in construction. For example, occupations such as roofers and carpenters’ helpers typically require no formal educational credential at the entry level. And you can typically enter more than half of the occupations shown in the tables with a high school diploma or its equivalent, such as a GED.

You typically need a certificate or other postsecondary nondegree award to enter the occupations of heavy and tractor trailer truck drivers and heating, air conditioning, and refrigeration mechanics and installers. The three highest paying occupations in the tables—construction managers, cost estimators, and civil engineers—typically require a bachelor’s degree for entry. 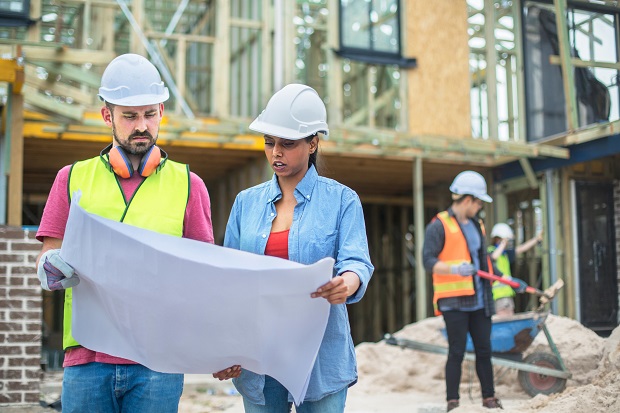