City careers on the move: Occupations in urban transportation

For many people, traveling to and from destinations in urban areas—cities, towns, and suburbs—is vital to their daily routines. To get where they need to go, these people rely on workers who drive and maintain buses, taxis, trains, and other modes of urban transportation.

In 2020, there were about 1.9 million workers in selected occupations that involve helping people get into, around in, and out of cities, according to the U.S. Bureau of Labor Statistics (BLS). The rate of projected employment growth in these occupations varies. But overall, they are expected to have more than 240,000 openings, on average, each year from 2020 to 2030. (These data include all employment and openings for the occupations wherever they are located, not just in urban transportation.)

Keep reading to learn more about some of the occupations related to urban transportation.

Occupations on the go

Urban transportation includes both publicly subsidized and privately owned options. Some workers drive the vehicles that safely move people to, from, and within cities. Others maintain and repair the equipment that keeps everything and everyone going.

Employment. Table 1 shows that passenger vehicle drivers except transit and intercity bus drivers accounted for the largest number of jobs in these occupations in 2020. Close behind was the occupation of automotive service technicians and mechanics.

Outlook. From 2020 to 2030, employment in these occupations is projected to grow about 13 percent, faster than the 8-percent average for all occupations. The occupation of passenger vehicle drivers except transit and intercity bus drivers is projected to have both the fastest employment growth (26 percent) and to add the most jobs (180,600) of all the occupations in the table. BLS expects employment growth for these passenger vehicle drivers to come, in large part, from demand for ride-hailing services that complement public transportation systems in urban areas.

In addition, BLS expects that much of the projected employment growth for some occupations is likely to occur early in the 2020–30 decade. The early growth in these occupations will result from recovery from the COVID-19 recession that began in 2020. Among the occupations related to urban transportation that may be affected are locomotive engineers, motorcycle mechanics, and passenger vehicle drivers.

Table 1 also shows that projected fast employment growth may not mean many new jobs in some occupations. For example, average growth is projected for employment of subway and streetcar operators (10 percent); however, this occupation is projected to add fewer jobs over the decade than is automotive service technicians and mechanics, which is expected to have little to no change in employment (less than 1 percent growth). This is because there are fewer subway and streetcar operators to begin with than there are automotive service technicians and mechanics.

New jobs resulting from projected employment growth are a source of occupational openings, but they’re not the only one. Workers who permanently leave an occupation—either to transfer to another or to exit the labor force, such as to retire—also create opportunities. As chart 1 shows, most of the projected annual openings in transportation-related occupations stem from the need to replace those separations.

Wages. Six of the 9 occupations related to urban transportation shown in chart 2 had median annual wages that were higher than the median wage for all occupations in 2020 ($41,950). Locomotive engineers ($71,870), subway and streetcar operators ($69,440), and rail car repairers ($57,710) had the highest wages of occupations in chart 2. However, table 1 and chart 1 also show that these occupations were among the smallest in employment and have the fewest projected openings, on average, of the ones presented.

The wage estimates include wage and salary workers only and do not include the self-employed. Wages for self-employed workers may vary from those shown in chart 2; that’s especially relevant for occupations in which the rate of self-employment is higher than that for all workers (6 percent), such as passenger vehicle drivers except transit and intercity bus drivers (18 percent).

BLS also provides information about the education and experience that workers typically need to enter an occupation, along with the training required to attain competency in it. And, as table 2 shows, applicants can enter all of these selected occupations with either a high school diploma or a postsecondary nondegree award. 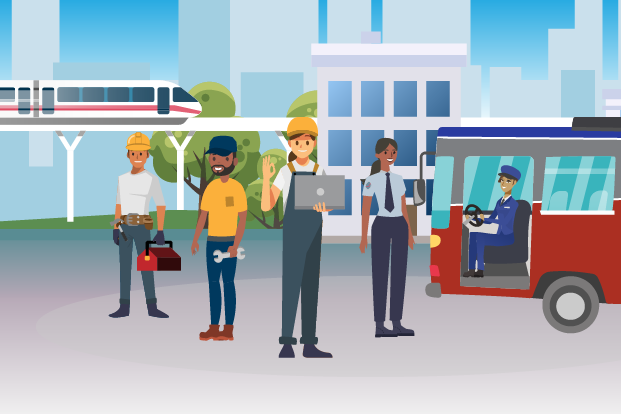 In This Article
top bottom