This report consists of monthly and annual figures on Consumer Price Indexes (CPI) and Harmonized Indexes of Consumer Prices (HICP). Data for each country or area are presented as indexes and average annual growth rates from 1999 to 2013. For more information, see the section on Technical Notes

In June 2013, HICP monthly percent change from the previous year increased in all 16 countries compared. Netherlands experienced the highest growth, followed by the United Kingdom. Japan and Switzerland had the lowest growth.

The CPI and HICP both measure the average change in prices over time paid by consumers for a market basket of customary goods and services. However, the CPI measures have not been adjusted for comparability; in contrast, the HICP are an internationally comparable measure of consumer price inflation. For more information, see the section on Technical Notes.

For 2012, HICP increased in 14 of the 16 countries compared. Italy had the highest inflation followed by the United Kingdom. Japan had no change. Switzerland had the lowest HICP. 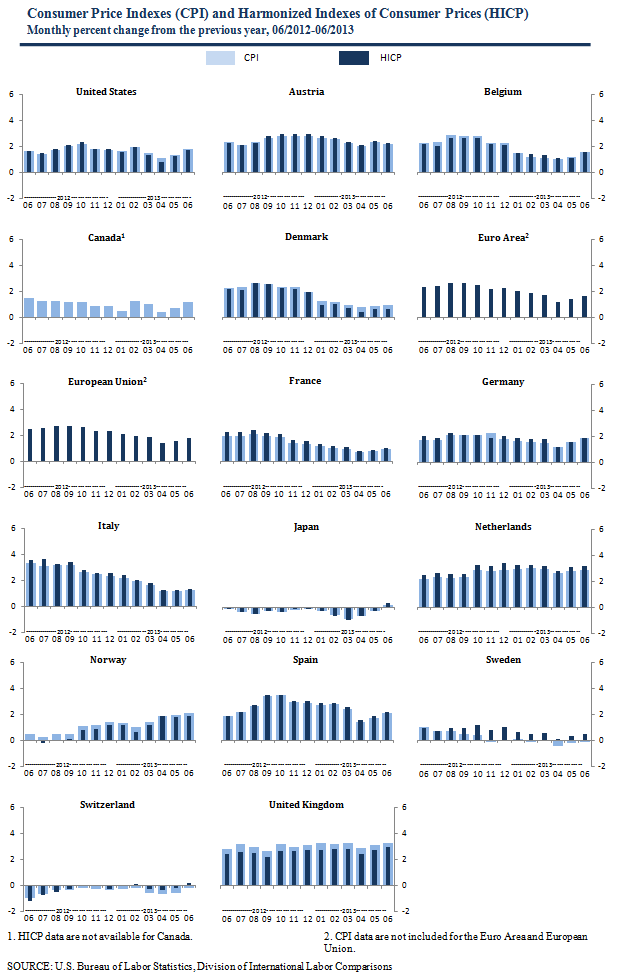 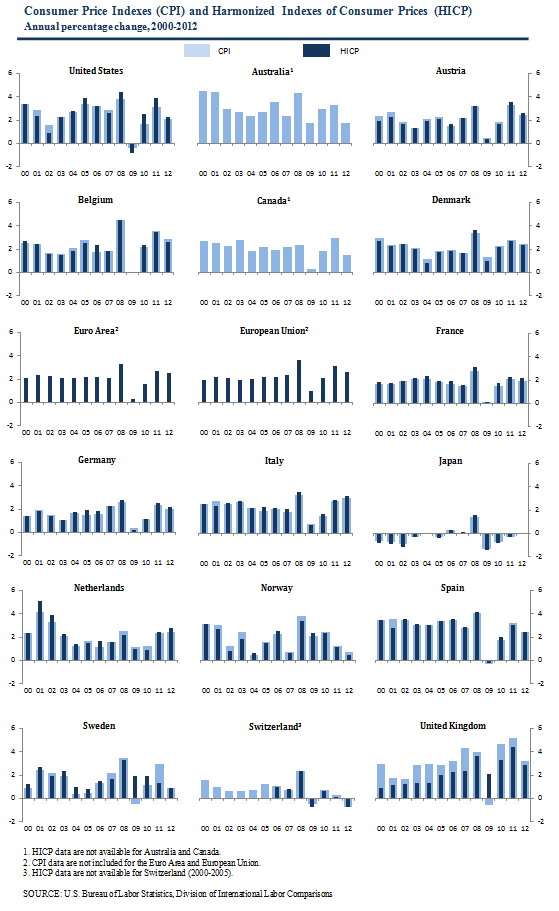 Consumer Price Indexes (CPI)
The Consumer Price Indexes or CPI are a measure of the average change over time in the prices paid by urban consumers for a market basket of consumer goods and services. This report covers the CPI for the United States, Australia, Canada, Japan, and 12 European countries. CPI indexes and annual percent changes are based upon national consumer price indexes as published by each country. They have not been adjusted for comparability. National differences exist, for example, in population coverage, frequency of market basket weight changes, and treatment of homeowner costs.

United States
The data for the United States are an "experimental" Bureau of Labor Statistics (BLS) series adjusted to the concepts of the EU HICP in that they are expanded to cover the entire (non-institutional) population and narrowed to remove owner-occupied housing costs that the HICP excludes from its scope. These U.S. data are produced outside of regular BLS production systems and, consequently, with less than full production quality. For more information, see "Comparing U.S. and European inflation: the CPI and the HICP," at www.bls.gov/opub/mlr/2006/05/art3full.pdf.

Euro Area
Data for the euro area refer to the Monetary Union Index of Consumer Prices (MUICP), the official series published by Eurostat for the EU member countries that have adopted the euro as the common currency. The MUICP is the household expenditure-weighted aggregate of the HICPs of the euro area. The composition of the euro area has changed over the years. As the euro area expands, data for new member countries are linked to this moving coverage series. Thus, the euro area index changes its geographical coverage according to the composition of the euro area during the period to which the data refer. The MUICP index for 2013 is comprised of the following 17 countries: Austria, Belgium, Cyprus, Estonia, Finland, France, Germany, Greece, Ireland, Italy, Luxembourg, Malta, the Netherlands, Portugal, Slovakia, Slovenia, and Spain. For analytical purposes, Eurostat also makes available historical series covering all the current euro area countries. For more information see the Eurostat Web site, at http://epp.eurostat.ec.europa.eu/portal/page/portal/eurostat/home.

European Union
Data for the European Union refer to the European Index of Consumer Prices (EICP), the official series published by Eurostat for the European Union (EU). The EICP is the household expenditure- weighted aggregate of the Harmonized Indexes of Consumer Prices (HICPs) of the EU member countries. The composition of the EU has changed over the years. As EU membership expands, data for new member countries are linked to this moving coverage series. Thus, the EU index changes its geographical coverage according to the composition of the EU during the period to which the data refer. The EU index for 2013 is comprised of the following 27 countries: Austria, Belgium, Bulgaria, Cyprus, the Czech Republic, Denmark, Estonia, Finland, France, Germany, Greece, Hungary, Ireland, Italy, Latvia, Lithuania, Luxembourg, Malta, the Netherlands, Poland, Portugal, Romania, Slovakia, Slovenia, Spain, Sweden, and the United Kingdom. For analytical purposes, Eurostat also makes available historical series covering all the current EU countries.