Ten occupations accounted for more than 1 out of every 5 U.S. jobs in May 2010. Retail salespersons and cashiers were the two largest occupations, with employment of 4.2 and 3.4 million, respectively. The largest occupations also included registered nurses; janitors; and laborers and hand freight, stock, and material movers. 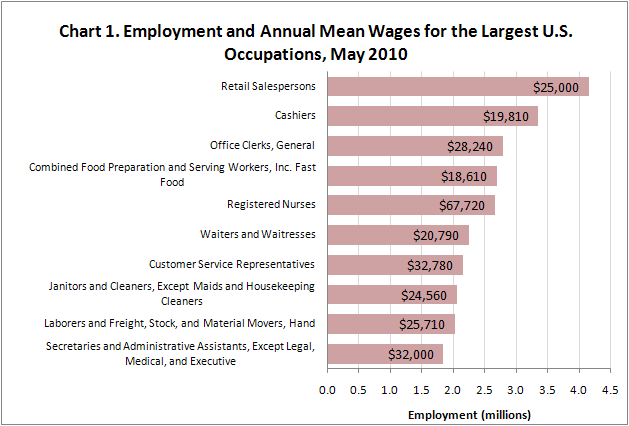 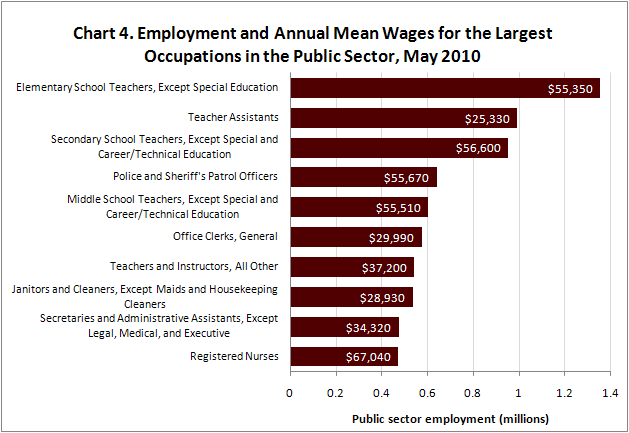 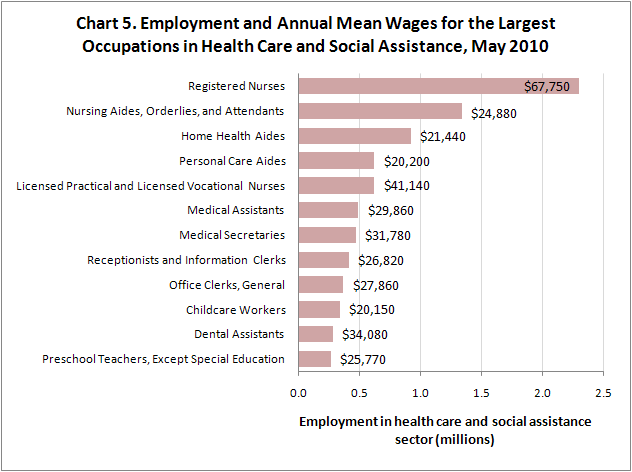 Organizations providing health care and social assistance, such as hospitals, residential care facilities, and child day care services and preschools, accounted for about 14 percent of U.S. jobs, more than any other type of employer. Over half of employment in this sector was in healthcare-related occupations, including the two largest occupations, registered nurses, with sector employment of nearly 2.3 million, and nursing aides, orderlies, and attendants, with employment of 1.3 million. (See chart 5.) Home health aides, licensed practical and licensed vocational nurses, medical assistants, and dental assistants also were among the largest healthcare-related occupations in this sector; other large occupations included personal care aides, medical secretaries, childcare workers, and preschool teachers.

Retail trade was the second-largest industry sector, accounting for about 13 percent of overall employment. Over 60 percent of retail trade jobs were in just four occupations: retail salespersons, cashiers, stock clerks and order fillers, and first-line supervisors of retail salesworkers. Providers of educational services, manufacturers, and accommodation and food service establishments also were among the largest employers, with each of these three industry sectors accounting for 9 to 10 percent of U.S. employment. Education, training, and library occupations—including teacher assistants and elementary, middle, and secondary school teachers—made up 59 percent of employment in the educational services sector. Production occupations such as team assemblers and machinists made up about half of manufacturing employment, while 80 percent of jobs in the accommodation and food services sector were in food preparation and serving related occupations. 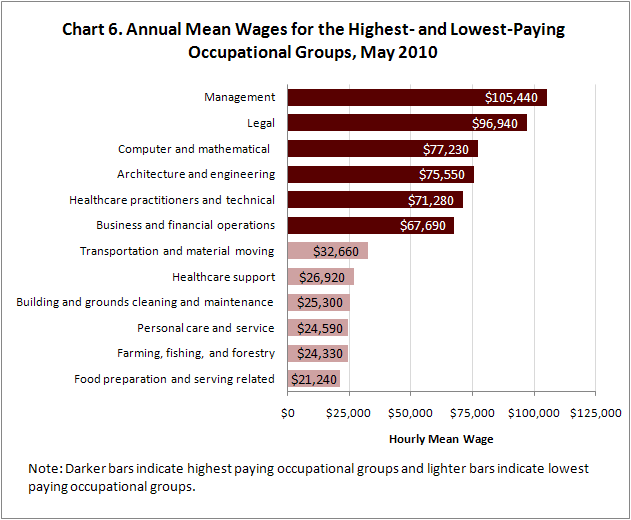 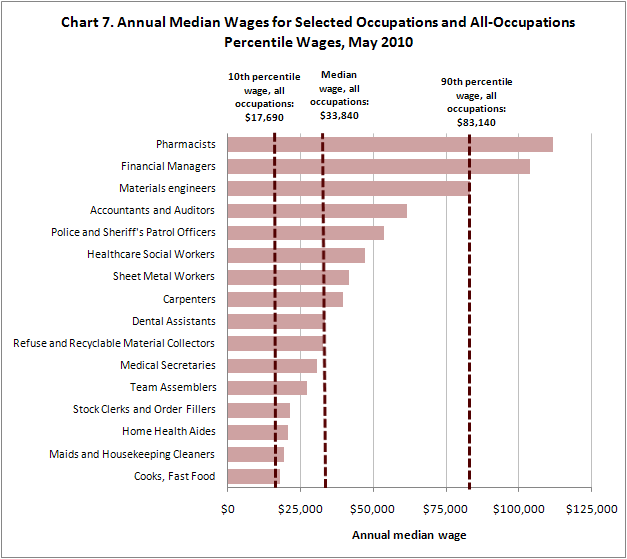 Median wages for selected occupations, along with percentile wages across all occupations, are shown in chart 7. Ten percent of jobs in the economy had wages at or below the 10th percentile wage of $17,690 per year. Because these low-paying jobs were in a variety of occupations, and because each occupation had a variety of wages, no individual occupation had a median wage below the 10 percentile; however, the lowest paying occupations had median wages only slightly above this level. Most of the lowest paying occupations were related to food preparation and serving or personal care and service, including fast food cooks, with an annual median wage of $18,100; dishwashers ($18,150); shampooers ($18,270); and amusement and recreation attendants ($18,450). Other relatively low paying occupations included cashiers ($18,500), graders and sorters of agricultural products ($19,180), childcare workers, and maids and housekeeping cleaners (both $19,300).

California, Texas, New York, Florida, and Illinois were the states with the highest total employment, accounting for more than one-third of U.S. jobs. These and other states with high overall employment also had the highest employment of many individual occupations. However, smaller states often had higher shares of their employment in specific jobs, in part because of factors like geographical characteristics and industry mix. For example, Louisiana, a medium-sized state in terms of total employment, and Alaska, a smaller state, had among the highest employment concentrations of several water transportation occupations, such as sailors and marine oilers; captains, mates, and pilots of water vessels; and ship engineers. Nebraska and Idaho had some of the highest concentrations of food scientists and technologists, while South Dakota had high concentrations of animal scientists and soil and plant scientists.

Metropolitan areas and divisions with the highest total employment included New York-White Plains-Wayne, N.Y.-N.J.; Los Angeles-Long Beach-Glendale, Calif.; Chicago-Naperville-Joliet, Ill.; and Houston-Sugar Land-Baytown, Texas. As at the state level, these large metropolitan areas also tended to have high employment of many individual occupations, although smaller areas often had higher shares of their employment in a given occupation. 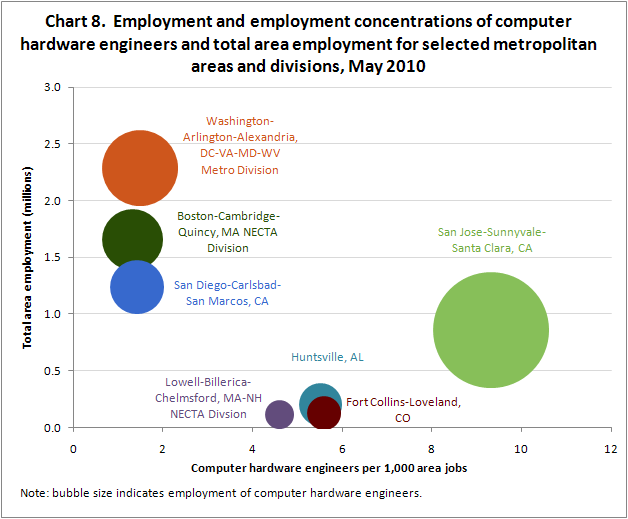 Complete Occupational Employment Statistics data for May 2010 are available from the OES home page. This highlight was prepared by Audrey Watson. For more information, please contact the OES program.