Looking for a job and don’t know where to start? Consider preparing yourself with information from the Occupational Employment and Wage Statistics (OEWS) program at the U.S. Bureau of Labor Statistics. Data from the OEWS program can serve as a useful resource for jobseekers. OEWS data are valuable because they show employment and wages for individual occupations in specific geographic areas or industries. These data, updated annually, are available online at www.bls.gov/oes/tables.htm. There are many ways to use these free, publicly available data. Here are some tips on how to use OEWS data to focus your job search:

Focus on your interests

On the OEWS website, you can search a comprehensive list of about 830 occupations to find those related to your interests or experience. For example, under “Community and Social Service Occupations,” you will find occupations such as marriage and family therapists, healthcare social workers, and rehabilitation counselors. Alternatively, if you are interested in working in a particular industry, you can find information on the variety of jobs in that industry. For example, jobs in the arts, entertainment, and recreation industry include fundraisers, exercise trainers and group fitness instructors, and agents and business managers.

Many occupations are found predominantly in specific industries. For example, 51 percent of civil engineers worked in the engineering services industry and 25 percent worked for federal, state, and local government. With this knowledge, jobseekers who originally may have focused on finding openings for this occupation in the private sector can broaden the scope of their searches to include government employers as well.

Wages vary for numerous reasons, including different skills, experience, geographic locations, and industry. Although jobseekers may be tempted to move to areas where wages are significantly higher, they should consider cost of living before packing up. The New York metropolitan area may have higher-than-average wages and employment, but the high cost of living can offset these higher wages. 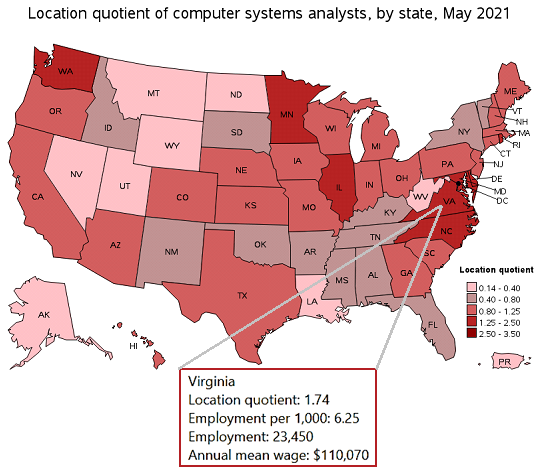