Actors work in various settings, including production studios, theaters, and theme parks, or on location. Work assignments are usually short, ranging from 1 day to a few months.

How to Become an Actor

Many actors enhance their skills through formal dramatic education, and long-term training is common.

About $tools.number.format('#,###',$op) openings for actors are projected each year, on average, over the decade. Many of those openings are expected to result from the need to replace workers who transfer to different occupations or exit the labor force, such as to retire.

Explore resources for employment and wages by state and area for actors.

Learn more about actors by visiting additional resources, including O*NET, a source on key characteristics of workers and occupations.

What Actors Do About this section 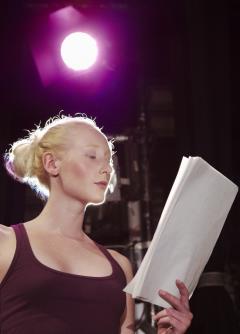 Actors must memorize and rehearse their lines.

Actors express ideas and portray characters in theater, film, television, and other performing arts media. They interpret a writer’s script to entertain or inform an audience.

Actors typically do the following:

Most actors struggle to find steady work, and few achieve recognition as stars. Some work as “extras”—actors who have no lines to deliver but are included in scenes to give a more realistic setting. Some actors do voiceover or narration work for animated features, audiobooks, or other electronic media.

In some stage or film productions, actors sing, dance, or play a musical instrument. For some roles, an actor must learn a new skill, such as horseback riding or stage fighting.

Most actors have long periods of unemployment between roles and often hold other jobs in order to make a living. Some actors teach acting classes as a second job.

Work Environment About this section 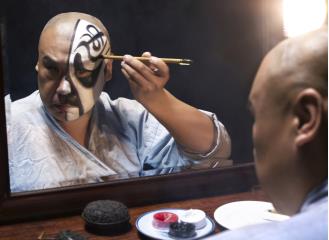 Work assignments are usually short, ranging from 1 day to a few months, and actors often hold another job in order to make a living. They are frequently under the stress of having to find their next job. Some actors in touring companies may be employed for several years.

Actors may perform in unpleasant conditions, such as outdoors in bad weather, under hot stage lights, or while wearing an uncomfortable costume or makeup.

Work hours for actors are extensive and irregular. Early morning, evening, weekend, and holiday work is common. Some actors work part time. Few actors work full time, and many have variable schedules. Those who work in theater may travel with a touring show across the country. Film and television actors may also travel to work on location.

How to Become an Actor About this section 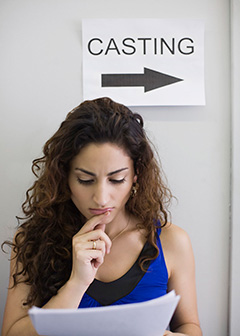 Actors may audition for many roles before getting a job.

Many actors enhance their skills through formal dramatic education, and long-term training is common.

Many actors enhance their skills through formal dramatic education. Many who specialize in theater have bachelor’s degrees, but a degree is not required.

Although some people succeed in acting without getting a formal education, most actors acquire some formal preparation through a theater company’s acting conservatory or a university drama or theater arts program. Students can take college classes in drama or filmmaking to prepare for a career as an actor. Classes in dance or music may help as well.

Actors who do not have a college degree may take acting or film classes to learn their craft. Community colleges, acting conservatories, and private film schools typically offer these classes. Many theater companies also have education programs.

Creativity. Actors interpret their characters’ feelings and motives in order to portray the characters in the most compelling way.

Memorization skills. Actors memorize many lines before filming begins or a show opens. Television actors often appear on camera with little time to memorize scripts, and scripts frequently may be revised or even written just moments before filming.

Persistence. Actors may audition for many roles before getting a job. They must be able to accept rejection and keep going.

Physical stamina. Actors should be in good enough physical condition to endure the heat from stage or studio lights and the weight of heavy costumes or makeup. They may work many hours, including acting in more than one performance a day, and they must do so without getting overly tired.

Reading skills. Actors must read scripts and be able to interpret how a writer has developed their character.

Speaking skills. Actors—particularly stage actors—must say their lines clearly, project their voice, and pronounce words so that audiences understand them.

In addition to these qualities, actors usually must be physically coordinated to perform predetermined, sometimes complex movements with other actors, such as dancing or stage fighting, in order to complete a scene.

It takes many years of practice to develop the skills needed to be a successful actor, and actors never truly finish training. They work to improve their acting skills throughout their career. Many actors continue to train through workshops, rehearsals, or mentoring by a drama coach.

Every role is different, and an actor may need to learn something new for each one. For example, a role may require learning how to sing or dance, or an actor may have to learn to speak with an accent or to play a musical instrument or sport.

Many aspiring actors begin by participating in school plays or local theater productions. In television and film, actors usually start out in smaller roles or independent movies and work their way up to bigger productions.

As an actor’s reputation grows, he or she may work on bigger projects or in more prestigious venues. Some actors become producers and directors.

Pay About this section

Work hours for actors are extensive and irregular. Early morning, evening, weekend, and holiday work is common. Some actors work part time. Few actors work full time, and many have variable schedules. Those who work in theater may travel with a touring show across the country. Actors in movies may also travel to work on location.

Compared with workers in all occupations, actors have a higher percentage of workers who belong to a union. Many film and television actors join the Screen Actors Guild-American Federation of Television and Radio Artists (SAG-AFTRA), whereas many stage actors join the Actors’ Equity Association. Union membership can help set work rules, and assist actors in receiving benefits and bigger parts for more pay. Union members must pay yearly dues, which can be expensive for actors who are beginning their careers.

Job Outlook About this section

About $tools.number.format('#,###',$op) openings for actors are projected each year, on average, over the decade. Many of those openings are expected to result from the need to replace workers who transfer to different occupations or exit the labor force, such as to retire.

Employment of actors is projected to show little or no change from 2018 to 2028. The number of Internet-only platforms, such as streaming services, is likely to increase, along with the number of shows produced for these platforms. This growth may lead to more work for actors.

Many small and medium-sized theaters have difficulty getting funding. As a result, the number of performances is expected to decline. Large theaters, with their more stable sources of funding and more well-known plays and musicals, should provide more opportunities for actors.

Actors face intense competition for jobs. Most roles, no matter how minor, have many actors auditioning for them. For stage roles, actors with a bachelor’s degree in theater may have a better chance of landing a part than those without one.

State & Area Data About this section

Similar Occupations About this section

This table shows a list of occupations with job duties that are similar to those of actors.

Contacts for More Information About this section

For more information about actors, visit

National Endowment for the Arts

For a career video on actors, visit

The What They Do tab describes the typical duties and responsibilities of workers in the occupation, including what tools and equipment they use and how closely they are supervised. This tab also covers different types of occupational specialties.

The Work Environment tab includes the number of jobs held in the occupation and describes the workplace, the level of physical activity expected, and typical hours worked. It may also discuss the major industries that employed the occupation. This tab may also describe opportunities for part-time work, the amount and type of travel required, any safety equipment that is used, and the risk of injury that workers may face.

How to Become One

The How to Become One tab describes how to prepare for a job in the occupation. This tab can include information on education, training, work experience, licensing and certification, and important qualities that are required or helpful for entering or working in the occupation.

The Pay tab describes typical earnings and how workers in the occupation are compensated—annual salaries, hourly wages, commissions, tips, or bonuses. Within every occupation, earnings vary by experience, responsibility, performance, tenure, and geographic area. For most profiles, this tab has a table with wages in the major industries employing the occupation. It does not include pay for self-employed workers, agriculture workers, or workers in private households because these data are not collected by the Occupational Employment Statistics (OES) survey, the source of BLS wage data in the OOH.

The State and Area Data tab provides links to state and area occupational data from the Occupational Employment Statistics (OES) program, state projections data from Projections Central, and occupational information from the Department of Labor's CareerOneStop.

The Similar Occupations tab describes occupations that share similar duties, skills, interests, education, or training with the occupation covered in the profile.

The wage at which half of the workers in the occupation earned more than that amount and half earned less. Median wage data are from the BLS Occupational Employment Statistics survey. In May 2018, the median annual wage for all workers was $38,640.

Additional training needed (postemployment) to attain competency in the skills needed in this occupation.

Typical level of education that most workers need to enter this occupation.

Work experience in a related occupation

Work experience that is commonly considered necessary by employers, or is a commonly accepted substitute for more formal types of training or education.

The employment, or size, of this occupation in 2018, which is the base year of the 2018-28 employment projections.

The projected percent change in employment from 2018 to 2028. The average growth rate for all occupations is 5 percent.

Typical level of education that most workers need to enter this occupation.

Additional training needed (postemployment) to attain competency in the skills needed in this occupation.

The percent change of employment for each occupation from 2018 to 2028.

The projected percent change in employment from 2018 to 2028.

The wage at which half of the workers in the occupation earned more than that amount and half earned less. Median wage data are from the BLS Occupational Employment Statistics survey. In May 2018, the median annual wage for all workers was $38,640.