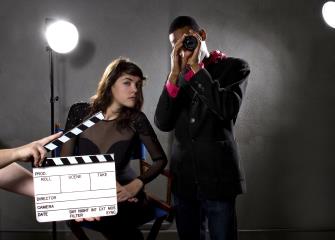 What Producers and Directors Do

How to Become a Producer or Director

Most producers and directors have a bachelor’s degree and several years of experience in motion picture, TV, or theater production, working as an actor, a film and video editor, or a cinematographer, or in another, related occupation.

About $tools.number.format('#,###',$op) openings for producers and directors are projected each year, on average, over the decade. Many of those openings are expected to result from the need to replace workers who transfer to different occupations or exit the labor force, such as to retire.

Explore resources for employment and wages by state and area for producers and directors.

Compare the job duties, education, job growth, and pay of producers and directors with similar occupations.

Learn more about producers and directors by visiting additional resources, including O*NET, a source on key characteristics of workers and occupations.

What Producers and Directors Do 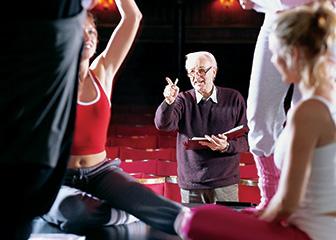 Stage directors make sure the cast and crew give a consistently strong live performance.

Producers and directors typically do the following:

Producers make the business and financial decisions for a motion picture, TV show, commercial, or stage production. They raise money for the project and hire the director and crew. The crew may include set and costume designers, film and video editors, a musical director, a choreographer, and other workers. Some producers may assist in the selection of cast members. Producers set the budget and approve any major changes to the project. They make sure that the production is completed on time, and they are ultimately responsible for the final product.

Directors are responsible for the creative decisions of a production. They select cast members, conduct rehearsals, and direct the work of the cast and crew. During rehearsals, they work with the actors to help them portray their characters more accurately. For nonfiction video, such as documentaries or live broadcasts, directors choose topics or subjects to film. They investigate the topic and may interview relevant participants or experts on camera. Directors also work with cinematographers and other crew members to ensure that the final product matches the overall vision.

Directors work with set designers, costume designers, location scouts, and art directors to build a project’s set. During a film’s postproduction phase, they work closely with film editors and music supervisors to make sure that the final product comes out the way the producer and director envisioned. Stage directors, unlike television or film directors, who document their product with cameras, make sure that the cast and crew give a consistently strong live performance. For more information, see the profiles on actors, writers and authors, film and video editors and camera operators, dancers and choreographers, and multimedia artists and animators.

Large productions often have various producers who share responsibilities. For example, on a large movie set, an executive producer is in charge of the entire production and a line producer runs the day-to-day operations. A TV show may employ several assistant producers to whom the head or executive producer gives certain duties, such as supervising the costume and makeup teams.

Similarly, large productions usually employ several assistant directors, who help the director with smaller production tasks such as making set changes or notifying the performers when it is their time to go onstage. The specific responsibilities of assistant producers or directors vary with the size and type of production they work on.

Although directors are in charge of the creative aspects of a show, they ultimately answer to producers. Some directors also share producing duties for their own films. 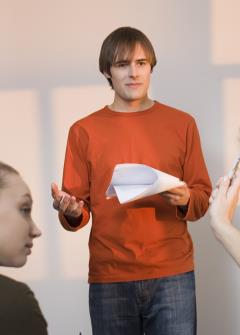 Producers and directors work under a lot of pressure, and many are under constant stress to finish their work on time. Work assignments may be short, ranging from 1 day to a few months. They sometimes must work in unpleasant conditions, such as bad weather.

Theater directors and producers may travel with a touring show across the country, while those in film and television may work on location (a site away from the studio and where all or part of the filming occurs).

How to Become a Producer or Director 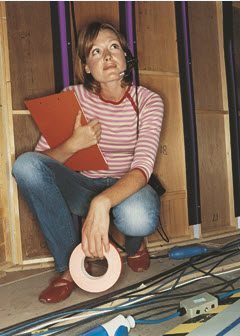 Producers and directors ensure that a project stays on schedule and within budget.

Most producers and directors have a bachelor’s degree and several years of work experience in an occupation related to motion picture, TV, or theater production, such as experience as an actor, a film and video editor, or a cinematographer.

Producers and directors usually have a bachelor’s degree. Many students study film or cinema in programs at colleges and universities. In these programs, students learn about film history, editing, screenwriting, cinematography, and the filmmaking process. As of 2017, the National Association of Schools of Theatre provided accreditation to more than 180 postsecondary institutions for their programs in theater arts.

Others producers and directors have degrees in writing, acting, journalism, or communications. Some producers earn a degree in business, arts management, or nonprofit management.

Many stage directors complete a degree in theater, and some go on to earn a Master of Fine Arts (MFA) degree. Classes may include directing, playwriting, set design, and acting.

Work Experience in a Related Occupation

Producers and directors might start out working in theatrical management offices as business or company managers. In television or film, they might start out as assistants or in other low-profile studio jobs. For more information, see the profiles on film and video editors and camera operators.

As a producer’s or director’s reputation grows, he or she may work on larger, more expensive projects that attract more attention or publicity.

Communication skills. Producers and directors must coordinate the work of many different people to finish a production on time and within budget.

Creativity. Because a script can be interpreted in different ways, directors must decide how they want to interpret it and then how to represent the script’s ideas on the screen or stage.

Leadership skills. Directors instruct actors and help them portray their characters in a believable manner. They also supervise the crew, which is responsible for behind-the-scenes work.

Time-management skills. Producers must find and hire the best director and crew for the production. They make sure that all involved do their jobs effectively, keeping within a production schedule and a budget.

About $tools.number.format('#,###',$op) openings for producers and directors are projected each year, on average, over the decade. Many of those openings are expected to result from the need to replace workers who transfer to different occupations or exit the labor force, such as to retire.

Employment of producers and directors is projected to grow 5 percent from 2018 to 2028, about as fast as the average for all occupations. Some job growth in the motion picture and video industry is expected to stem from strong demand from the public for movies and television shows, as well as an increased demand from foreign audiences for U.S.-produced films.

Consumer demand for reality shows on television is likely to increase, so more producers and directors will be needed to create and oversee editing of these programs. In addition, the volume of TV shows is expected to grow as the number of Internet-only platforms, such as streaming services, increases along with the number of shows produced for these platforms. This growth should lead to more work opportunities for producers and directors.

Theater producers and directors who work in small- and medium-sized theaters may see slower job growth because many of those theaters have difficulty finding funding as fewer tickets are sold. Large theaters in big cities, such as New York and Los Angeles, which usually have more stable sources of funding, should provide more opportunities.

This table shows a list of occupations with job duties that are similar to those of producers and directors.

For more information about producers and directors, visit

National Association of Schools of Theatre

National Endowment for the Arts