Impact of the drought on corn exports: paying the price

In the summer of 2012, weather conditions caused the most severe drought the United States has seen since the 1950s.1 This drought affected agricultural crops across the nation. As a result of drought-related crop damage, U.S. export prices for corn soared nearly 128 percent above the 20-year historical average, as measured by the Bureau of Labor Statistics (BLS) monthly export price index. Export prices also hit the highest level since the import and export price index series began in December 1984.2 Although weather conditions often wreak havoc on corn and secondary product price levels, this drought not only caused a spike in export corn prices, but has begun to influence U.S. trade for corn-derived products such as ethanol as well.

According to the U.S. Department of Agriculture (USDA), drought conditions affected approximately 80 percent of U.S. agricultural land in the summer of 2012.3 Despite preliminary expectations of a strong corn-growing season due to a mild winter, early planting, and adequate rainfall levels, the drought conditions and high sustained temperatures from June through August damaged crops severely. By mid-August, 60 percent of U.S. farms were suffering from moderate to extreme drought.4 The agricultural impact has been especially severe in major corn-producing states, such as Iowa, Illinois, Nebraska, Minnesota, Indiana, Wisconsin, South Dakota, Michigan, Missouri, and Kansas. As of September 30, only 25 percent of corn acreage was rated as being in good or excellent condition, compared with 52 percent at the same time in 2011.5 Because the United States is the world’s largest producer and exporter of corn, the damaged crops have important implications for global corn supplies and prices.

As seen in chart 1, the BLS export price index for corn rose 32.5 percent from June to August as drought conditions worsened.6 This rise coincided with a 13-percent decrease in corn supplies from the previous year.7 Beginning stocks following the 2011 season were already low, thus setting the stage for a tight supply. Then, on October 11, the USDA forecast that U.S. production would be just 10.7 billion bushels, making the 2012 crop the smallest since 2006.8 After coming down just 2.0 percent in September, the export corn index finished the third quarter of 2012 with a 29.8-percent gain—the largest quarterly rise in the index since a 30.5-percent advance during the first quarter of 2008.

Droughts in the United States are not unprecedented. Most recently, the nation experienced droughts in 1988 and 1995. Prior to the 1988 drought, U.S. agriculture experienced relatively good growing seasons in the previous 2 years that led to both lower export prices and strong starting stocks. However, the 1988 drought resulted in a 30-percent drop in corn production that year. Despite the large beginning stocks,9 export corn prices surged 31.4 percent in the third quarter as prices returned to pre-1986 levels. With relatively small beginning stocks leading into the 1995 drought, the index rose 45.2 percent overall for the year, although the increases in corn prices were more spread out than in 1988. 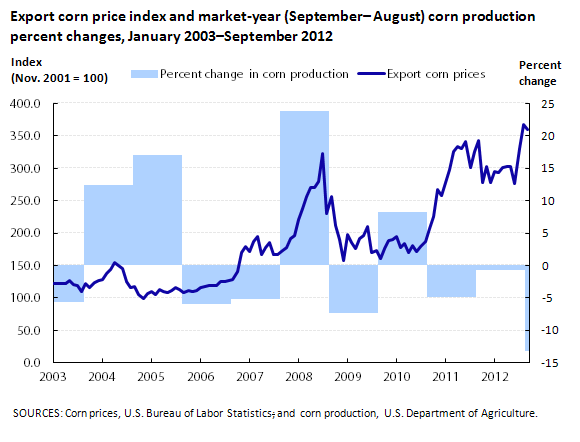 Impact of the drought

The difference in the current drought’s impact on corn, in comparison to previous droughts, is that, since the 1990s, there has been a fundamental shift in how corn is used. In 1995, nearly 55 percent of corn was used for domestic feed grain and residual purposes.10 Today, there is a growing trend in the proportion of the corn crop used for ethanol production. As seen in chart 2, demand for ethanol has been increasing for several years, concurrently with the introduction of fuel mandates. As of 2012, close to 40 percent of U.S. corn production goes into ethanol.11 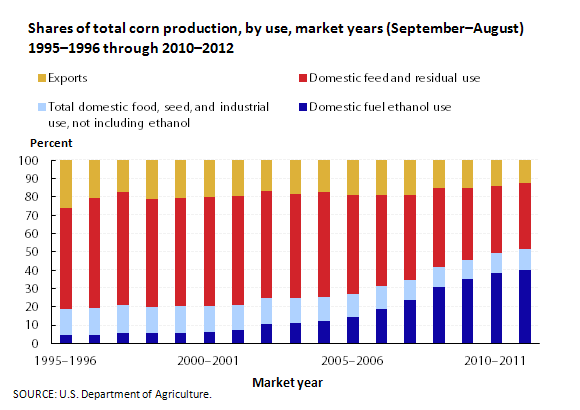 The increased demand for ethanol and the increase in corn prices in the United States has played an important role in international trade in ethanol as well. Until 2008, the United States imported considerable amounts of ethanol from other countries, particularly Brazil. Then, strong corn production and falling prices starting in 2008, allowed U.S. corn-based ethanol to become more export competitive. As a result, in 2010 the United States emerged as a net ethanol exporter for the first time. Further, poor growing conditions in Brazil raised the price of sugar, the main ingredient in Brazilian ethanol, allowing the United States to emerge as the world’s leading ethanol exporter in 2011. In reaction to rising corn prices, a number of ethanol producers have already begun to curtail their output.12 What remains to be seen is how much the high price of corn from this past growing season will shift the U.S. export position on ethanol in the future. BLS will continue tracking prices for these products, to identify market and economic trends.

During the third quarter of 2012, import prices rose 1.5 percent, after falling 3.8 percent in the second quarter of the year. The third-quarter increase was led by an 8.2-percent advance in fuel prices that more than offset a 0.4-percent drop in prices for nonfuel imports.

Fuel import prices. The price index for fuels and lubricants advanced 8.2 percent in the third quarter of 2012, the largest quarterly increase since the index rose 20.5 percent in the first quarter of 2011. Despite a 2.0-percent drop in July, prices for fuel increased in August and September, rising 5.7 percent and 4.4 percent, respectively, leaving the index up overall for the 3-month period.

Petroleum prices fell in July, paralleling a stronger dollar and speculation regarding further quantitative easing by the U.S. Federal Reserve.13 In August and September petroleum prices increased, as concerns were raised over the supply of oil because of geopolitical tensions near the Strait of Hormuz, where approximately one-fifth of global sea-borne oil exports flows. 14 Moreover, in September, the U.S. Federal Reserve announced a new round of bond buying to stimulate the economy, and this measure also appeared to drive petroleum prices up.15

The price index for natural gas rose 17.1 percent during the third quarter of 2012, following an 11.0-percent drop the previous quarter. The third quarter started with a 12.4-percent increase in July, the largest monthly advance since a 17.7-percent rise in January 2010. The hot, dry conditions across much of the nation led to an increase in electricity usage, driving natural gas prices up during the first 2 months of the quarter.16 In September, prices for natural gas declined 0.3 percent, with mild temperatures resulting in lowered demand.17

Nonfuel import prices. In contrast to fuel prices, nonfuel prices fell for the second consecutive quarter in September, declining 0.4 percent after a 0.2-percent drop for the quarter ended in June. As illustrated in chart 3, declining prices for industrial supplies and materials, excluding fuel, and for consumer goods were the major contributors to the overall decrease in nonfuel prices.

Prices for industrial supplies and materials, excluding fuels, fell 2.3 percent in the third quarter of 2012, led primarily by a 23.7-percent decline in prices for other agricultural products. Prices for guar gum, which had been up earlier in the year, decreased in the past 3 months on investor concerns over high output and weaker international demand than in previous months. Industrial guar gum is used in drilling and in hydraulic fracturing, or fracking, to extract gas from shale, a process that has transformed energy supplies notably in the United States.18

In the third quarter of 2012, the price index for consumer goods, excluding automotives, declined 0.4 percent, the largest decrease since a 0.5-percent fall in the first quarter of 2009. Prices for foods, feeds, and beverages fell 0.3 percent for the quarter ended in September, while, in contrast, the price index for capital goods increased 0.1 percent and that for automotive vehicles increased 0.5 percent.

Agricultural export prices. Agricultural prices advanced 12.7 percent in the third quarter of 2012, primarily as a result of increases in the prices of soybeans (up 28.5 percent), corn (29.8 percent), and wheat (29.6 percent). As discussed in the first section of this report, the severe drought that has affected much of the nation drove crop prices up. With the smallest harvest in 9 years, U.S. soybean reserves hit their lowest level in four decades.19 Despite the drought in the Midwest, U.S. wheat production was not affected as much, because most of the wheat in this region was harvested in the spring and early summer, before the dry conditions took hold.20 Still, export wheat prices advanced during the first 2 months of the quarter, increasing 18.0 percent in July and 9.0 percent in August, because of a reduction in world wheat production. Droughts in Russia, Ukraine, and Kazakhstan cut global wheat stocks for the 2012–2013 season.21 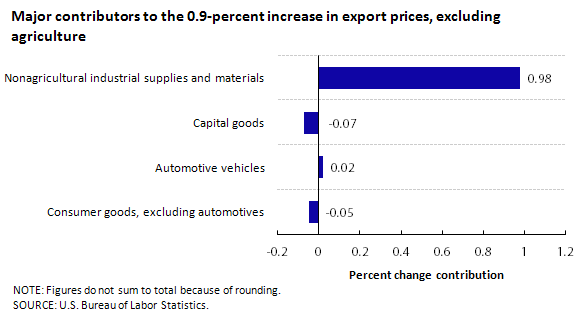 The price index for nonagricultural industrial supplies and materials increased 2.7 percent in the third quarter, after a 5.2-percent decrease between March and June. The largest contributor to the third-quarter rise was a 9.9-percent increase in fuel prices, led by a 20.4-percent jump in fuel oil prices. The latter jump was attributed in part to refineries along the Gulf Coast temporarily ceasing operations in August due to Hurricane Isaac.22 Higher crude oil prices also contributed to an increase in refined oil prices.

Prices for automotive vehicles advanced 0.3 percent in the third quarter of 2012, after increasing 0.4 percent during the second quarter. In contrast, the price index for export capital goods fell 0.2 percent and that for consumer goods declined 0.3 percent.

This Beyond the Numbers report was prepared by Will Adonizio, Nancy Kook, and Sharon Royales, economists in the Office of Prices and Living Conditions, International Price Program. Email:  MXPinfo@bls.gov. Telephone: 202-691-7101.

1 The June 2012 Palmer value of 55 percent is the highest percentage since December 1956, when 58 percent of the contiguous United States was in moderate to extreme drought. See “State of the Climate: Drought, 2012” (National Oceanic and Atmospheric Administration, National Climatic Data Center, July 16, 2012), http://www.ncdc.noaa.gov/sotc/drought/2012/6.

6 Prior to this increase, a sharp drop of nearly 52 percent from July 2008 to December 2008 coincided with the onset of the December 2007–June 2009 recession. This drop brought export corn prices back toward their historical levels, before the general rise in commodity prices in 2007 and 2008. From August 2010 through August 2012, a 96-percent increase was observed in the BLS export corn index.