Other information related to Consumer Price Index data are available online at the following links:

Each year thousands of people write contracts with escalation clauses that are tied to the Consumer Price Index (CPI). Escalation contracts call for an increase in some type of payment in the event of an increase in prices. These contracts are used in a wide variety of ways, from adjusting rent prices to adding cost-of-living adjustments to alimony payments and wage contracts. Unfortunately, many escalation contracts tied to the CPI are vague. For example, a contract may stipulate that “the Consumer Price Index (CPI)” be used to escalate an apartment rent, but the Bureau of Labor Statistics (BLS) publishes thousands of CPIs each month, so a more carefully worded contract could minimize ambiguity and the likelihood of future disputes. This issue of Beyond the Numbers can help those who use the CPI to write escalation clauses to create a more comprehensive contract.

Determine which CPI population group to use in the contract. The CPI publishes price changes for two population groups. The Consumer Price Index for All Urban Consumers (CPI-U), as the name implies, measures price change for urban consumers. The Consumer Price Index for Urban Wage Earners and Clerical Workers (CPI-W) measures price change for a narrower population of Americans. An escalation contract should specify whether the CPI-U or CPI-W is to be used. The CPI-U covers a significantly broader segment of Americans and represents the broadest measure of consumer inflation that BLS produces, therefore it is typically subject to less sampling error than the CPI-W.1

Specify a unique CPI index series. In summary, the CPI population, item category, and reference base should all be explicitly stated in an escalation contract in order to spell out which CPI is tied to the contract. In addition, parties should note they are using indexes that are not seasonally adjusted. For example, if the parties wanted a contract to use the broadest measure of consumer inflation, they would write the contract to specify the precise index being used, as follows:

The Consumer Price Index for All Urban Consumers (CPI-U); U.S. City Average; All items, not seasonally adjusted, 1982–1984=100 reference base.

Specify the timing and frequency of the escalation. The index reference month (or other time period) to be used in the contract should be clearly stated. The CPI for a given month is published about 2 weeks after the reference month, so a contract could not be escalated until the data are released. For example, if the two parties to a contract want to escalate a $1,000 rent each year using the December CPI each year, they should note in the contract that they are using the December index, published in mid-January.

Include a provision on price “floors” and “ceilings.” Prices for most broad categories of items, such as the all items index, tend to increase over long periods of time. But prices can fall as well. The contract should include a provision on what to do if the index series used in the escalation clause decreases. For example, if the index specified in the contract decreases 5 percent, should the amount being escalated fall 5 percent as well, or should there be no change in the amount paid? This concept is sometimes called a “floor.”

Similarly, prices might increase more than either party expected. As such, the parties involved in the escalation contract may want to consider adding a “ceiling” to each price increase. For example, parties who do not want increases to exceed 10 percent a year should state this in the contract.

The Bureau of Labor Statistics neither encourages nor discourages the use of price adjustment measures in contractual agreements. Also, although BLS can provide technical and statistical assistance to parties developing escalation agreements, BLS can neither develop specific wording for contracts nor mediate legal or interpretive disputes that might arise between the parties to the agreement.

The U.S. all items Consumer Price Index for All Urban Consumers (CPI-U) increased at a 5.0-percent seasonally adjusted annual rate (SAAR) during the third quarter of 2012. (See chart 1.) This follows an increase of 3.7 percent and a decline of 0.8 percent in the first and second quarters, respectively. For the first 9 months of 2012, the index has increased at a 2.6-percent SAAR. This compares with a rise of 3.0 percent in 2011. 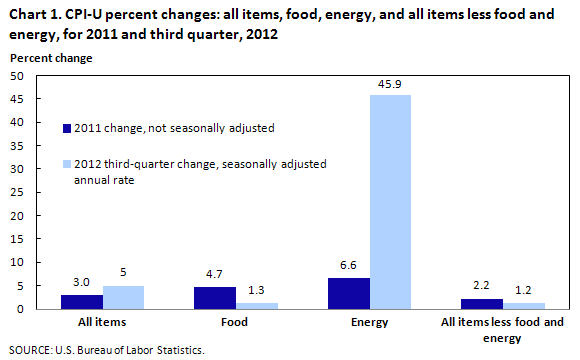 A turnaround in the energy index, which rose 45.9 percent in the third quarter, was the primary source of the change in the all items index. While contributing to the change in all items from June to September, the food index and the index for all items less food and energy grew at much slower rates (up 1.3 and 1.2 percent, respectively) than the third-quarter energy index.

The energy index maintained its pattern of alternating between increasing in one quarter, then decreasing the next quarter. The third quarter’s 45.9-percent rise was preceded by a second-quarter decline of 26.2 percent and a first-quarter climb of 18.3 percent. With the inclusion of data from the fourth quarter of 2011, the energy index increased modestly, a 2.3-percent increase over the last 12 months. The year-to-date annual growth rate for energy paints a different picture. It is up 8.4 percent, consistent with the somewhat large increases of the previous 2 years. Energy was up 6.6 percent in 2011 and 7.7 percent in 2010. The average annual rate of change from September 2007 to September 2012 was a more moderate 4.1 percent.

The 18.2-percent increase in the fuel oil and other fuels index was driven by a 38.0-percent upward move in the fuel oil index. Fuel oil, consistent with other oil derivatives, suffered a large decline in the second quarter (down 38.5 percent) after a large first-quarter increase (31.2 percent). The propane, kerosene, and firewood index fell 13.7 percent, and has fallen four quarters in a row. Fuel oil has increased 4.0 percent over the last 12 months, but the 12.1-percent decline in propane, kerosene, and firewood during the last year has pulled fuel oil and other fuels down 1.3 percent over the last 12 months.

Although changes in gasoline tend to have a large impact on 1-month changes in the CPI, the significant increases and decreases of gasoline over the last four quarters have dampened the longer term impact of gasoline prices on overall inflation. Gasoline prices were up 6.8 percent over the last 12 months, whereas the 12-month change for all items and all items less food and energy were both 2.0 percent. 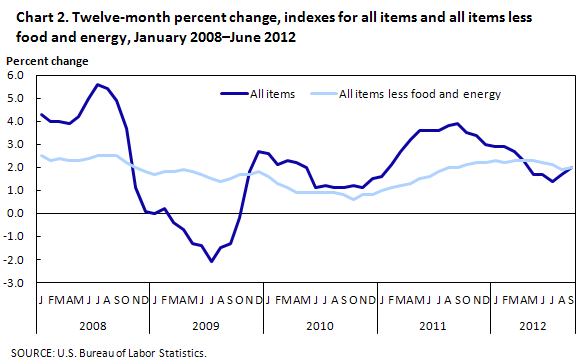 New and used motor vehicles fell 4.6 percent in the third quarter of 2012, after 5.2- and 1.5-percent increases in the second and first quarters, leaving a year-to-date annualized change of 0.6 percent. The 12-month change was down 0.4 percent. The used cars and trucks index was the source of the fall in the new and used motor vehicles index. Used cars and trucks fell 10.9 percent in the third quarter. New vehicle prices fell 0.3 percent. Airline fares dropped 10.1 percent during the third quarter, after a 2.2-percent increase and a 2.5-percent decline in the second and first quarters, respectively. Airline fares were down 2.6 percent on a 12-month basis and down at a seasonally adjusted annual rate (SAAR) of 10.1 percent

Medical care (up 3.4 percent), education (3.0 percent), other goods and services (2.5 percent), and apparel (0.1 percent) had modest price growth in the third quarter. Recreation was flat during this time period, after modest growth in the second quarter (1.3 percent) and first quarter (2.9 percent). Communication fell 4.5 percent in the third quarter, after growing 0.8 and 1.6 percent in the second and first quarters, respectively. As a result of its third-quarter performance, the communication index has a negative 12-month percent change (down 0.6 percent) and year-to-date annualized rate (down 0.7 percent).

Among the more important of the smaller indexes, household furnishings and operations declined 0.8 percent in the third quarter of 2012, after little change in the first two quarters. Prescription drug prices rose 4.9 percent in the third quarter, after 1.4-percent and 4.7-percent increases in the second and first quarters, respectively. Medical care services increased 3.5 percent from July to September, after 6.9-percent and 2-percent increases in the first two quarters of the year, respectively. Physicians’ services (up 4.7 percent), dental services (3.5 percent), and hospital and related services (2.1 percent) contributed to a positive increase, while eyeglasses and eye care (down 5.1 percent) reduced medical care services’ rate of price growth. Tobacco and smoking products (up 4.8 percent) drove the third-quarter increase in other goods and services (2.5 percent). The 1.8-percent increase in the personal care index in the third quarter slowed the acceleration rate of goods and services in that quarter.

In conclusion, the indexes for all items, all items less food and energy, food, and energy are all increasing at approximately a 2-percent rate of growth on a 12-month basis. Although the quarterly indexes for energy remain extremely volatile, shelter is consistently running around 2 percent and food just below 2 percent. n

This Beyond the Numbers summary was prepared by Malik Crawford and Kenneth J. Stewart, economists in the Office of Prices and Living Conditions, U.S. Bureau of Labor Statistics. Email: crawford.malik@bls.gov. Telephone: (202) 691-5375.

1 A third type of index series, the “chained” Consumer Price Index for All Urban Consumers (or C-CPI-U) should generally not be considered for use in private escalation contracts, as the C-CPI-U is subject to two annual revisions, making its inclusion in an escalation contract more complex.