Death on the job: fatal work injuries in 2011

By Stephen Pegula and Jill Janocha

More BLS articles and information related to workplace injuries are available online at the following links:

Even as government agencies, safety organizations, and employers strive to eliminate deaths at work, the latest data from the Bureau of Labor Statistics (BLS) Census of Fatal Occupational Injuries (CFOI) show that in the United States, an average of 13 workers die every day from injuries incurred on the job.1

This issue of Beyond the Numbers summarizes the final 2011 data from CFOI and highlights some important historical trends as well.

Frequency of fatal injuries in the workplace

There were a total of 4,693 fatal work injuries in 2011. Fatal occupational injuries can occur anywhere and at any time. In 2011, at least one worker died from an at-work injury on each of the 365 days of the year.

CFOI data show that workers are susceptible to a fatal injury while on the job.2 Ten workers under the age of 16 died from an injury incurred at work in 2011. A total of 194 workers age 75 and older were killed including 5 older than age 90. Fatally injured workers were employed in over 240 distinct occupations and over 300 unique industries in 2011. Both private sector (4,188 fatal work injuries) and public sector employees (505 fatal work injuries) face daily hazards while on the job.

Trends over the last 20 years

Where do fatal work injuries occur?

The number of fatal injuries per state in 2011 ranged from a low of 7 (Rhode Island) to a high of 433 (Texas). Chart 1 shows the distribution of fatal occupational injuries by state in 2011. 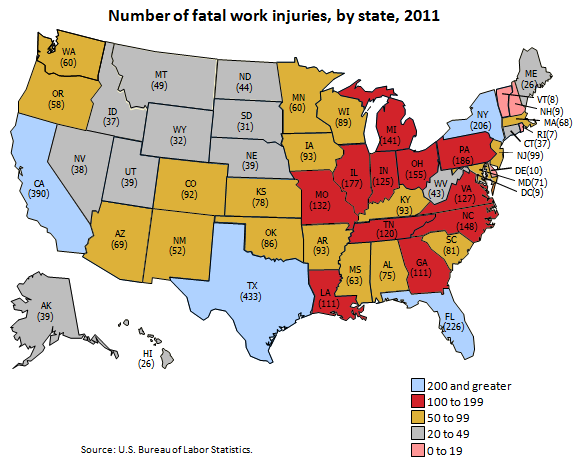 Data are also available by metropolitan statistical area (MSA). MSAs can include counties from multiple states so they oftentimes provide a more localized view of fatal occupational injuries. In 2011, the three MSAs with the largest number of fatal occupational injuries were New York-Northern New Jersey-Long Island (183), Los Angeles-Long Beach-Santa Ana (118), and Houston-Sugar Land-Baytown (105).6

Fatal injury rates, which are highlighted below, are available also by state for major industry sectors.

In 2011, men had a rate eight times the fatal injury rate compared with women and accounted for 92 percent of all deaths at work. The self-employed were over three times more likely than workers in general to be fatally injured while working. A large portion of the self-employed workers killed annually are from high fatal injury rate occupations like farmers, construction workers, motor vehicle operators, and landscapers. Starting at age 45, workers also faced an increasing likelihood of fatal injury as they advanced in age.

Most of the variations in workplace fatal injuries are attributable to the industries and occupations in which these types of workers are employed.7 Some occupations consistently have higher fatal injury rates than those for workers in general.

The leading event that precipitated fatal work injuries in the United States in 2011 was roadway incidents (1,103 deaths). Falls to a lower level (553) ranked second and struck by object or equipment (476) ranked third as events leading to fatal injuries on the job. Homicide ranked fourth with 468 workers killed on the job.

Upon request, information in this article will be made available to individuals with sensory impairments. Voice phone: (202) 691-5200. Federal Relay Service: 1 (800) 877-8339. This article is in the public domain and may be reproduced without permission.

2 For more information on fatal occupational injuries in 2011, see https://www.bls.gov/iif/oshcfoi1.htm#2011.

3 For more information on how BLS collected data on fatal occupational injuries prior to CFOI and the genesis of CFOI, please see Chapter 9 of the BLS Handbook of Methods, which can be accessed here: https://www.bls.gov/opub/hom/pdf/homch9.pdf.

5 CFOI changed the way it calculated fatal injury rates in 2008 so these two figures are not perfectly comparable. See https://www.bls.gov/iif/oshnotice10.htm for more information.

7 For more information on the risk of incurring a fatal injury on the job, see https://www.bls.gov/iif/oshcfoi1.htm#rates.