Expenditures of urban and rural households in 2011

More BLS articles and information related to consumer expenditures are available online at the following links:

The United States is a nation of great diversity. Large houses and big red barns are found on the open farmlands of the Midwest while apartments and coffee shops occupy the corners of busy city streets. The varying landscapes shape the lives, customs, and spending habits of Americans. Using data from the Bureau of Labor Statistics Consumer Expenditure Survey (CE), this Beyond the Numbers article examines demographic characteristics and spending habits of urban and rural households in the United States in 2011. In total, approximately 92 percent of households were urban and 8 percent were rural.1 The following data highlight important differences between consumer expenditures by rural and urban households in 2011: 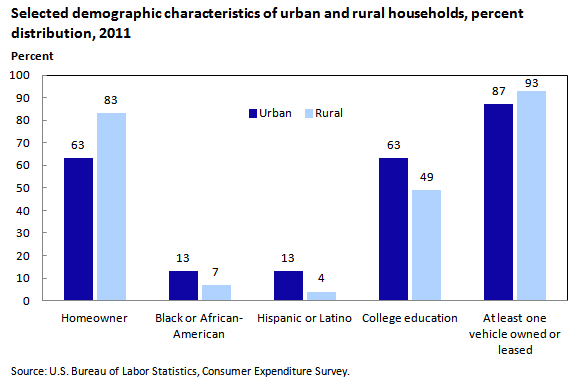 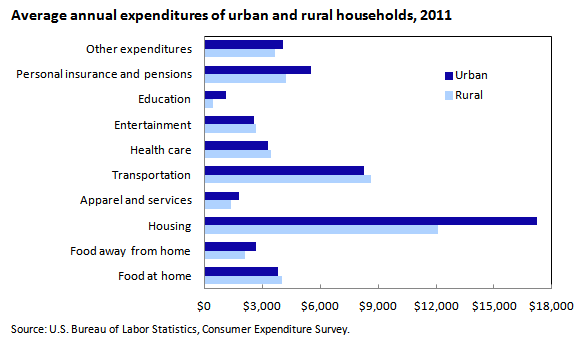 These data underscore the relative importance of housing in the average U.S. household budget. Housing expenditures accounted for 34.2 percent of all spending in urban households and 28.5 percent of all spending in rural households. As a point of comparison, urban households spent $17,226 on housing in 2011, more than they spent on clothing, transportation, health care, and entertainment combined. Although their spending habits differ in many ways, both urban and rural households spend the greatest share of household budgets on housing. 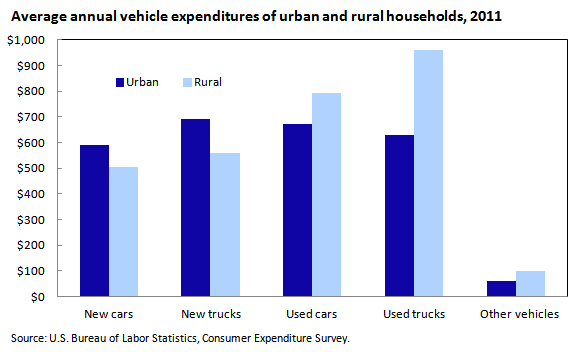 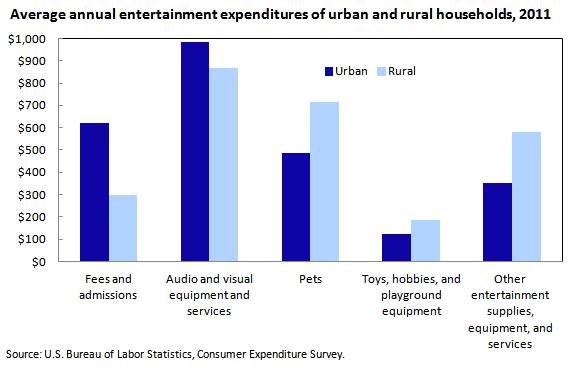 This Beyond the Numbers report was prepared by William Hawk, economist in the Office of Prices and Living Conditions, Consumer Expenditure Survey division. Email:  Hawk.William@bls.gov. Telephone: 202-691-5131.

1 The Consumer Expenditure Survey defines urban households as all households living inside a metropolitan statistical Area (MSA) plus households living in urban areas even if they are outside of an MSA. It is important to note that using this definition means some rural areas could be considered urban areas if they reside in the MSA. For more information please see, https://www.census.gov/programs-surveys/metro-micro/about.html and the U.S. Department of Health and Human Services publication How is rural defined? (https://www.hrsa.gov/rural-health/about-us/definition/index.html).

2 This figure represents income before taxes.

3 The reference person is the first household member mentioned by the respondent when asked to "start with the name of the person or one of the persons who owns or rents the home."