Retirement and medical benefits: Who has both?

By Lindsay B. Kimbro and Michelle B. Mayfield

More BLS articles and information related to retirement and medical benefits are available online at the following links:

Employee compensation packages commonly include both wages and benefits. For decades, employee benefits have been used as part of the total compensation package to attract and retain highly qualified workers. Just as workers in various occupations receive different levels of pay, they also receive access to different types and combinations of employee benefits.1 This article uses March 2012 National Compensation Survey (NCS) data to examine private industry workers’ access to medical benefits, retirement benefits, and combinations of the two benefits, by major occupation group, wage category, part-time and full-time status, union and nonunion status, and establishment size.2 The study finds notable differences in the patterns of access to medical and retirement benefits—separately, and in combination—among the various worker groups.

Throughout this analysis, each worker characteristic (wage category, establishment size, etc.) is treated independently. Of course, the workers who make up these data points do not fall neatly into one category; in reality, there is considerable overlap, which adds complexity to the overall picture. Since 1980, the NCS and its predecessor the Employee Benefit Survey (EBS) have published data on the incidence of specific types of employee benefits and many provisions of employer-provided retirement and health plans. In 2009, the NCS published for the first time estimates on the incidence of combinations of benefits among various groups of workers.3 Although the provisions, and value, of the plans themselves can vary widely among these categories of workers, the combined benefits incidence data provide greater insight into the benefits package that workers actually receive than the incidence of specific benefits alone. Major benefits such as medical insurance and retirement plans are not always offered together or to the same workers. 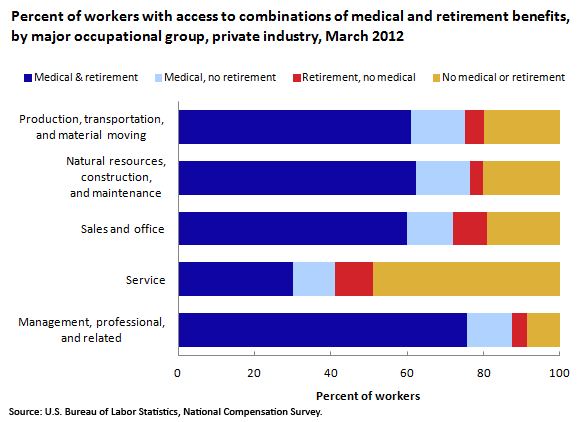 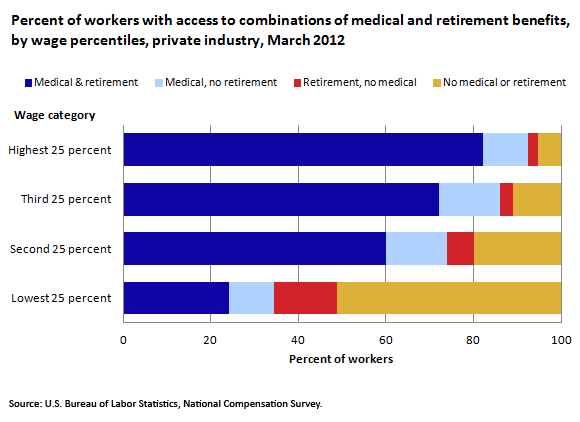 The NCS data on benefit access by wage category reflect the same pattern: greater access to medical and retirement benefits with higher earnings. Not only were employer costs per employee hour worked for wages and salaries in management, professional, and related occupations higher than those of workers in any of the other major occupational groups, they also had the highest rates of access to both medical and retirement benefits. Service workers had the lowest access rates and the lowest employer costs per hour worked for wages and salaries of any major occupational group.6 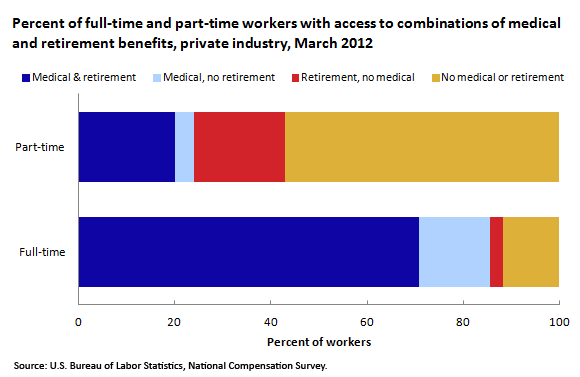 A worker’s bargaining status plays a role in access to benefits as well. Union workers generally have higher rates of access to benefits than their nonunion counterparts. Not only are employer costs for wages and salaries roughly $3 more per employee hour worked, on average, in the private sector ($23.17 per hour worked compared with $19.96 per hour worked), they also are more likely to have access to medical and retirement benefits, both separately and in combination.8 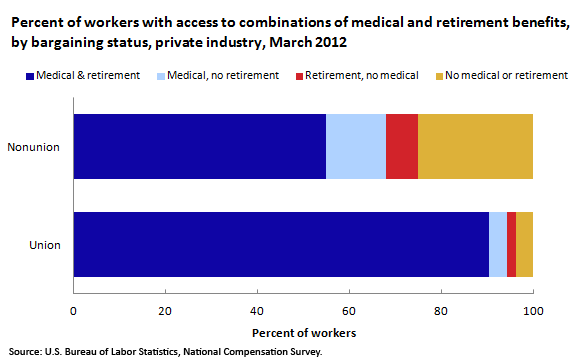 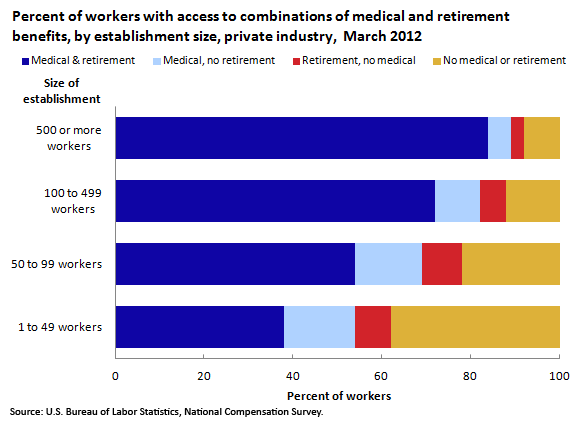 Some studies suggest that economies of scale are associated with health insurance benefits, meaning that larger companies can offer their employees health benefits at lower costs per worker than smaller companies.11 Although large establishments—those with 500 workers or more—account for over 16 percent of private industry employment in the first quarter of 2011, they are the most likely to offer both retirement and medical benefits.12 These data are consistent with theories of economies of scale regarding employer-provided benefits. According to an article published by the Internal Revenue Service, the Patient Protection and Affordable Care Act of 2010 includes tax credits to encourage small businesses to offer health benefits to their employees, which may result in changes to those data in the future.13

This article has examined the different rates of access to medical and retirement benefits and various combinations of the two benefits within private industry. People employed in management, professional, and related occupations have the highest rates of access to these benefits—both separately and in combination—while those employed in service occupations have the lowest rates of access. Access to medical and retirement benefits also trends positively with wage levels: workers who earn more tend to have greater access to these benefits. In addition, full-time workers are more likely to have access to both benefits than are part-time workers, and union workers have higher rates of access to both benefits than do nonunion workers, despite the relatively small share of the workforce represented by unions. Economies of scale appear to play an important role in the provision of these benefits, allowing larger businesses to offer medical and retirement benefits at substantially higher rates than smaller businesses. Employer-sponsored medical insurance and retirement benefits have become a normal part of the bargaining process for job seekers and employers, and they continue to be an important part of the overall compensation package offered to American workers.

This article is in the public domain and may be reproduced without permission.

Lindsay B. Kimbro and Michelle B. Mayfield, “Retirement and medical benefits: Who has both?” Beyond the Numbers: Pay & Benefits, vol. 2, no. 10 (U.S. Bureau of Labor Statistics, April 2013), https://www.bls.gov/opub/btn/volume-2/retirement-and-medical-benefits-who-has-both.htm

1 Trade-offs between wages and benefits are described by some economists as “compensating differentials, their size depends on the valuation of the marginal worker.” See Mark V. Pauly, “Making Sense of a Complex System: Empirical Studies of Employment-Based Health Insurance,” International Journal of Health Care Finance and Economics, September–December 2001, pp. 333–339, http://www.springerlink.com/content/l04pru35003721p0/.