More BLS articles and information related to higher education are available online at the following links:

The job market for recent college graduates in the United States, The Editor’s Desk

On average, education accounts for about 2 percent of total annual expenditures by U.S. consumers, but this percentage varies greatly by demographic.1 Some groups appear to spend much more than others, so it is natural to question what influences this variation in spending.

A popular conception is that racial and ethnic groups value higher education differently.  In economic terms, this is a reflection of the value of human capital—how much people are willing to invest in their children’s education. The notion that some groups invest more than others is often based on average participation rates but does not account for actual expenditures or the expenditures when you consider socioeconomic differences.  This Beyond the Numbers article looks at the amount of money invested in education by different race and ethnic groups and examines different factors that could contribute to the differences in expenditures.2

We find that race and ethnicity groups do, on average, spend vastly different amounts on education, but the likelihood of going to college (and thus having education expenditures) and socioeconomic factors have the most influence on families’ investment in higher education—and race and ethnicity is not the driving factor, as commonly thought.

Education expenditures and participation rates for all households

For this study, we analyzed 90,872 observations from the Consumer Expenditure Survey (CE) for years 2008 through 2010, and the results indicate that there is more to the story than average expenditures by race and ethnicity. 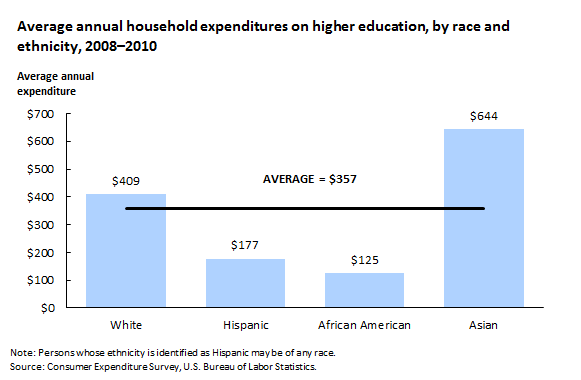 Some of the differences in expenditures are attributable to different higher-education participation rates by various groups. (See chart 2.) According to CE data, Asian families are more likely than other groups to send their children to college and therefore have greater education expenditures, on average. However, average higher-education expenditures across all households are incomplete as they do not distinguish between the families with students who are attending college from those who are not, nor do they compare households of different race and ethnicities on an even socioeconomic level. 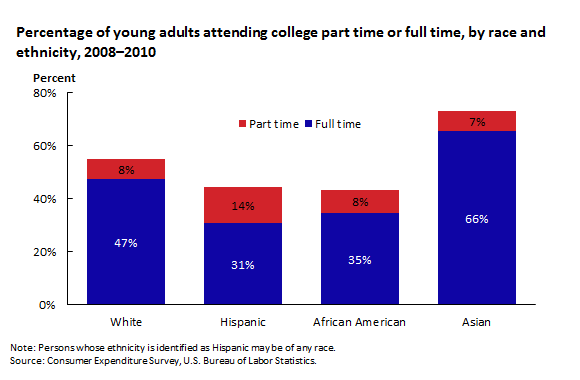 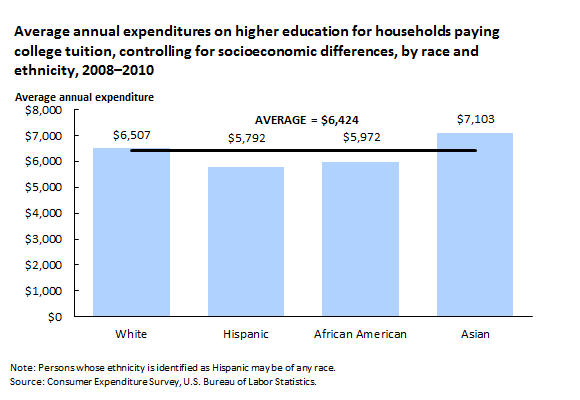 However, these much smaller differences in tuition expenditures are not actually statistically significant. In other words, when you compare families with similar household incomes and parental education levels, the higher education expenditure levels are essentially the same across all race and ethnic groups. As parents' education and income level increase, so do the expenditures for higher education. From another perspective, socioeconomic differences, not differences in race or ethnicity, have a greater influence on how families value higher-education investments.

This Beyond the Numbers summary was prepared by Tian Luo, economist in the San Francisco Division of Economic Analysis and Information, and Richard Holden, regional commissioner in the San Francisco Regional Office, U.S. Bureau of Labor Statistics. Email: luo.tian@bls.gov. Telephone: (415) 625-2286.

Information in this article will be made available to sensory-impaired individuals upon request. Voice phone: (202) 691-5200. Federal Relay Service: 1-800-877-8339. This article is in the public domain and may be reproduced without permission

3 For details on methodology, see Luo and Holden, “Investment in higher education by race and ethnicity,” https://www.bls.gov/opub/mlr/2014/article/investment-in-higher-education-by-race-and-ethnicity.htm.