By Reginald A. Noël

More BLS articles and information related to consumer spending are available at the following links:

Retirement expenditures for Whites, Blacks, and persons of Hispanic origin

Household spending data can offer great insight on how households choose and prioritize their wants and needs. In addition, changes in the household spending market basket help to determine Social Security’s general benefit increases, based on cost of living, as measured by the Consumer Price Index.1 Moreover, such information is widely used by policymakers and researchers to study the impact of inflation and government economic policy.2

Data from the U.S. Bureau of Labor Statistics (BLS) Consumer Expenditure (CE) Survey provide information on annual household spending. From these aggregated data, analysts, in government, business, labor, and academia, can generalize about consumer behavior in the U.S. population. However, looking at demographic subgroups of the population can give us a deeper understanding of consumption preferences and spending behavior for a particular group. Using data from the CE Survey, this article looks at the household spending and the income distribution of all Black households.3 It then compares and contrasts the spending patterns of low-income Black households to their high-income counterparts. Findings show that the average amount of pretax income for Black households is about 70 percent of the national average. In addition, the analysis based on income shows that tobacco and smoking supplies were the only expenditure category in which high-income Black households did not outspend low-income Black households.

Blacks, not including those of more than one race, made up 13.1 percent of the total United States population, with over 39 million people.4 The CE provides data on both large and small purchases by American households. This article is based on data from the Consumer Expenditure Quarterly Interview survey using data from 2010, 2011, and 2012.5 The sample used in this study is composed of 11,000 interviews in which reference persons self-identified their race as Black.6 This article analyzed the income distribution and spending patterns of all the Black households identified in the data. This sample was then partitioned based upon the 20th and 80th percentiles of Black households’ income before taxes to make comparisons between high and low income groups. 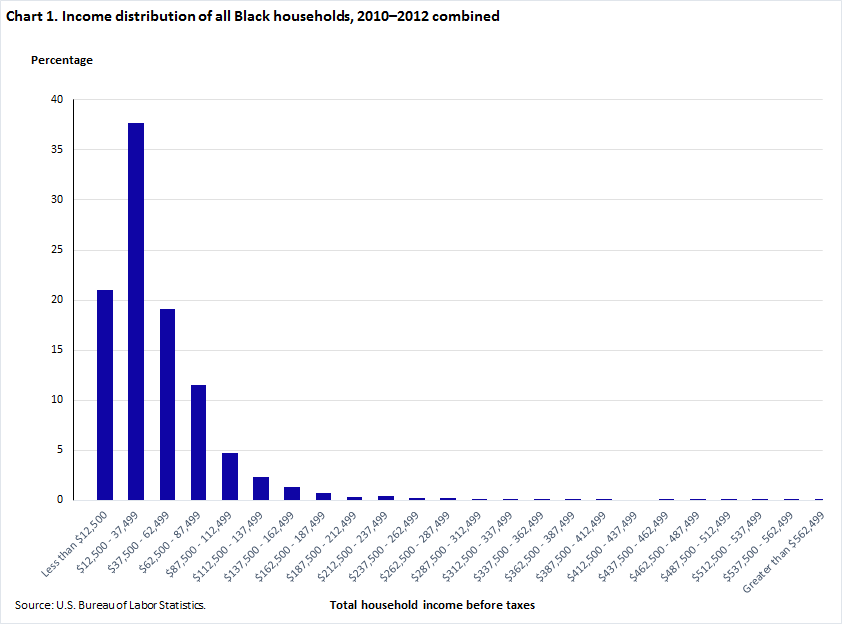 The average Black household contains 2.57 persons. In addition, Black households averaged 1.25 owned vehicles. Most of these households were renters, living in apartments or flats.8 Their dwellings averaged 5.45 rooms (including finished living areas and excluding all baths) and 1.49 bathrooms. Black households’ annual expenditures averaged $36,149, which was 79.8 percent of their average income before taxes. The amount spent on housing ($13,530) consumed the biggest portion of annual expenditures, accounting for more than one-third of the total. This was followed by transportation ($5,946) and food ($5,825). The remaining expenditures made up roughly 30 percent of total spending: personal insurance and pensions, healthcare, entertainment, cash contributions, apparel, and education, in addition to personal care, tobacco, alcohol, reading, and miscellaneous expenditures. (See chart 2.)

Comparisons of low-income and high-income households

Before comparing low-income and high-income Black households, these groups needed to be defined. In the sample, the lowest 20th percentile contained approximately 2,200 Black households that made less than $12,001 in pretax income per year from all sources of income. This coincided with the poverty threshold for one person under the age of 65 ($11,945).9 This lowest quintile group will be referred to as the “low-income” Black households.

The highest 20th percentile is made up of roughly 2,200 Black households that made more than $66,549 in pretax income per year from all sources of income. Their mean income was roughly $112,000. Comparatively, the highest 20th percentile of the national sample in the same period had a lower bound of approximately $94,000 and a mean income of approximately $162,000.10 Nonetheless, the Black households with income greater than or equal to $66,550 are the highest quintile group in their sample, and will be referred to as the “high-income” Black households.

Here are highlights of the spending patterns of low-income versus high-income Black households: 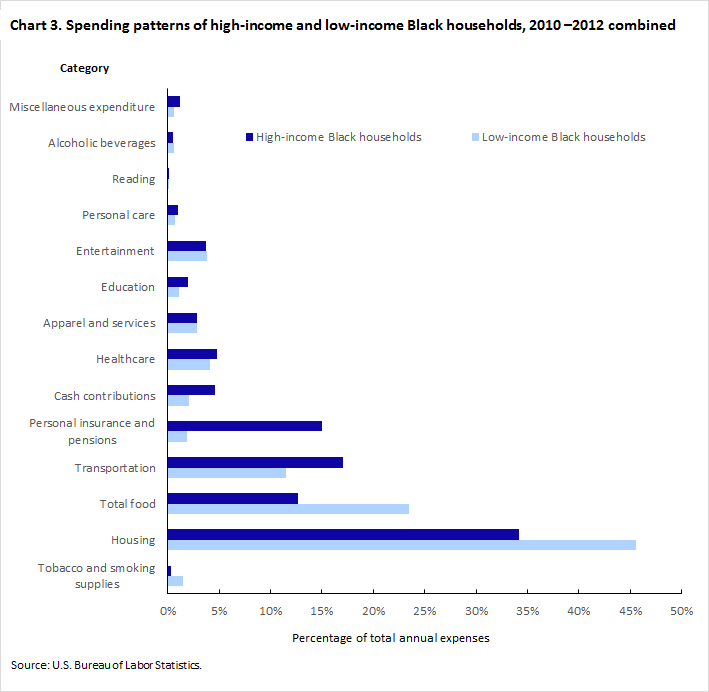 This Beyond the Numbers article was prepared by Reginald A. Noël, economist in the Office of Prices and Living Conditions, U.S. Bureau of Labor Statistics. Email: noel.reginald@bls.gov. Telephone: (202) 691-5135.

3 The Black population is defined by people who indicated in the CE survey that they are “Black or African American.” This includes people who are Sub-Saharan African (e.g., Kenyan and Nigerian) or Afro-Caribbean (such as Haitian and Jamaican).

8 This also includes a unit that could be located in the basement, attic, second floor, or over the garage of a single-family detached unit. Interview Data Dictionary, P77. August 30, 2013.

9 Poverty thresholds for 2012 by size of family and number of related children under 18 years: U.S. Census Bureau.

10 Lower bounds and means for the All United States-household tabulations were approximated as the average for the 3 years, weighted by their respective proportional populations. Sources: Table 1101. Quintiles of income before taxes: Annual expenditure means, shares, standard errors, and coefficient of variation, Consumer Expenditure Survey, 2012. https://www.bls.gov/cex/2012/combined/quintile.pdf.

11 All of the dollar comparisons between the low-income and high-income Black households in the sample were statistically significant except for the difference in the Tobacco and smoking supplies expenditures.

12 A detached home is defined as a structure with only one primary residence; however, the structure could include a rental unit(s) in the basement, attic, etc.) Interview Data Dictionary. P77. August 30, 2013.

13 The difference in these real values is not statistically significant.

14 Based on an article from the World Health Organization, the poor spend a larger proportion of their income on tobacco than do richer households.“Tobacco and Poverty: A Vicious Circle” http://www.who.int/tobacco/communications/events/wntd/2004/en/wntd2004_brochure_en.pdf.