Oil extraction surges with the help of sand

More BLS articles and information on the oil and gas extraction industry are available at the following links:

The effects of shale gas production on natural gas prices

The Bureau of Labor Statistics Producer Price Index (PPI) program tracks a sample of producers that represents nearly three-quarters of U.S. economic output. To maintain this broad coverage, the PPI must continually evolve to keep pace with new and emerging trends in the U.S. economy.

One such rapidly growing area is the extraction of oil and gas from shale deposits. According to the U.S. Energy Information Administration, domestic oil production has surged from 5.7 million barrels per day (bpd) in 2002 to 7.9 million bpd at the end of 2013.1 In 2014, the United States became the world’s largest producer of crude oil and related field production for the first time in decades, with production totaling 11 million bpd.2 This “shale revolution” has upended the status quo, to the point that some analysts are forecasting that North America could be a net exporter of oil by 2035.3

This production shift and the resultant economic boom is due to advances in oil field hydraulic fracturing (fracking). In short, oil field developers shoot a mixture of sand and other proppants into tight oil formations, breaking the oil out of soft rock formations and making it easier to extract.4 Recent technological modifications to fracking have enabled the rejuvenation of older wells where production had started to slow.5

In response to the expansion of hydraulic fracturing, demand for and production of hydraulic sand has boomed. With the growth of crude oil and natural gas production from tight oil and shale formations, the production of hydraulic fracturing sand increased 1,838 percent from 2003 to 2013,6 a compound annual growth rate of 30.92 percent. The Wall Street Journal, in an article about the growth and profits enjoyed by rapidly expanding sand mining companies, notes an estimate that “Frackers are expected to use nearly 95 billion pounds of sand this year, up nearly 30 percent from 2013 and up 50 percent from forecasts made by energy-consulting firm PacWest Consulting Partners a year ago.“7

Prior to the widespread expansion of hydraulic fracturing techniques in the last decade, sand-based proppants were a relatively minor output of Industry 212322 in terms of sales value and were not separately identified in most industry statistics. However, fracking sand production grew from approximately 6 percent of industrial sand tonnage produced in the United States in 2002 to an estimated 57 percent in 2012.8 (See chart 1.) 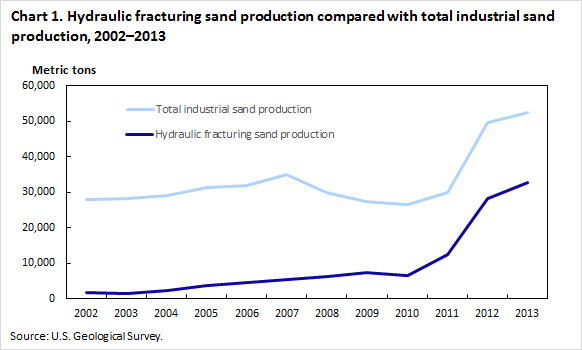 With the boom came a surge in public interest for price statistics on hydraulic fracturing sand.  In response to this demand, the PPI program began publishing a commodity index for Hydraulic fracturing sand (WPU139901211) in January 2013.  BLS faced several challenges in constructing an index for a product that was not separately identified in other Federal data sources. One piece of data central to index construction is the value of shipments (VOS) for the outputs an index represents. This is most often derived from the Census Bureau’s 5-year Economic Census and is used to weight component indexes relative to each other. Because the increase in production of hydraulic fracturing sand occurred so quickly, VOS data have not been available in official Economic Census statistics.

Consequently, PPI analysts needed to derive weights for the hydraulic fracturing sand index from an alternate source. In this case, PPI analysts turned to the 2009 silica minerals yearbook from the United States Geological Survey (USGS).9 The USGS monitors mine usage and activity throughout the United States, and publishes information from mining activities as disparate as soda ash and gold. Publicly available versions of its archives go back as far as 1932,10 and silica figures including fracking sand as a category date to 1995.11

PPI analysts used production volume data from the 2009 Yearbook (the most current at the time of the study) to evaluate the relative importance of fracturing sand compared with other product lines in NAICS 212322.  This allowed PPI to reapportion the 2007 Census benchmark weights among the various products in NAICS 212322 for which PPI was already capturing price information. By combining data from the Census Bureau and the USGS, PPI analysts were thereby able to introduce a hydraulic fracturing sand index to meet the demand for price data on a key input to a surging sector of the U.S. economy. The index for hydraulic fracturing sand can be downloaded from the BLS website by linking to https://data.bls.gov/timeseries/wpu139901211.

The PPI program will continue to rely on USGS data to calculate weights for the hydraulic fracturing sand index until corresponding Census Bureau data becomes available. PPI analysts take strides in keeping the indexes relevant, as they make adjustments to adapt and respond to an ever-changing world, even when normal sources of data are insufficient or when traditional methodologies are too confining. The construction and introduction of the index for hydraulic fracturing sand shows one way this can be done.

This Beyond the Numbers article was prepared by Steven D. Sawyer and Sterling Kelley, Economists in the Division of Producer Prices and Price Indexes, Office of Prices and Living Conditions, Email: kelley.sterling@bls.gov, or sawyer.steven@bls.gov, Telephone: (202) 691-7845.