By Jeff Rubenstein and Michael Conforti

To provide a better understanding of what goes on behind the scenes in the domestic retail market for gasoline, the Bureau of Labor Statistics calculates the PPI for automotive fuels and lubricants retailing. This index measures the average change in margins that gas stations receive for selling products such as gasoline and motor oil. Margins are calculated by subtracting the price at which retailers purchase fuel (the wholesale price of fuel) from the price at which they sell it (the retail price of fuel), reflecting the price for the value added through retail distribution.1

This Beyond the Numbers article explores how margins for gasoline retailing were influenced by the price changes in crude oil and retail gasoline from the second half of 2014 through early 2015. It reveals that gasoline stations delayed fully passing along lower prices to consumers.

Chart 1 compares the PPI margin-based index for automotive fuels and lubricants retailing, West Texas Intermediate (WTI) spot oil prices, and retail prices for gasoline from January 2011 through June 2015.2The most significant increases in margins occurred in October and December of 2014 (26 percent and 15.4 percent, respectively). The Energy Information Administration (EIA) reported significant price declines in October and December for WTI crude oil (9.5 percent and 21.8 percent, respectively) that outpaced the average decline in retail gasoline prices (6.6 percent and 12.2 percent, respectively). As a result, in the fourth quarter of 2014 the automotive fuels and lubricants retailing index increased 41.0 percent, while WTI crude oil fell 36.4 percent and retail prices for gasoline declined 24.5 percent. 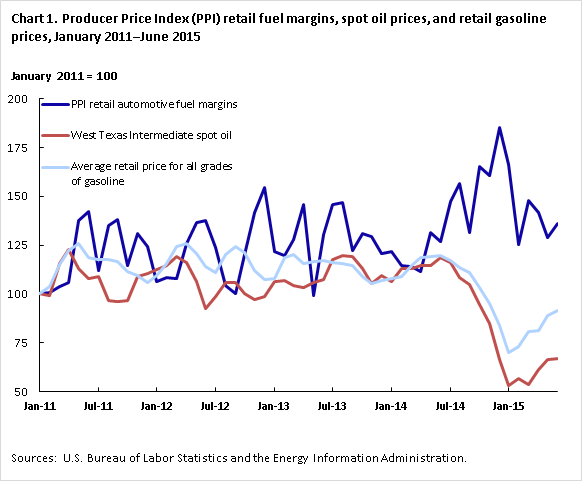 Chart 2 illustrates the same datasets as chart 1, however, to reduce volatility in the margin-based PPI for automotive fuels and lubricants retailing and better reflect medium- to long-term trends in that data series, it is presented using a 3-month moving average. 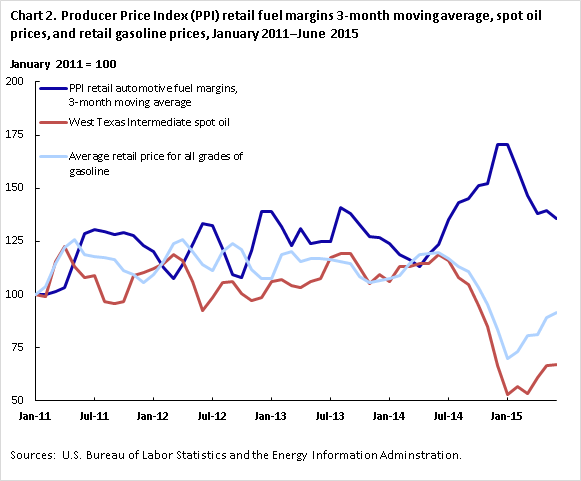 Although crude oil costs play a major role in prices consumers pay at the pump, they represent only a portion of the entire retail price of fuel. According to the EIA, crude oil costs represented 68 percent of retail gasoline prices in 2013.3 Differences in crude oil and retail gasoline price movements also can be explained by other reasons, such as pass-through delays (delays in the transmission of price movements though the various stages of production and distribution), wholesale distribution costs, refinery costs, and local competition.

Pass-through delays contribute to the inverse relationship between retail automotive fuel margins and prices for crude oil and retail gasoline. Gas stations tend to raise retail prices gradually in response to increasing wholesale prices. Similarly, gasoline prices at the pump typically decline at a slower rate over time in response to falling wholesale prices. (In chart 1, pass-through delays are apparent where prices for WTI spot oil peak.) This delay in passing along wholesale price changes to consumers typically results in lower margins during periods of rising crude oil prices and higher margins during periods of declining crude oil prices. The price of crude oil is volatile, and significant price changes take time to work their way through the refining and distribution sectors before reaching consumers.

Although pass-through delays are ever-present, they do not explain why price declines are passed along more slowly than price increases. One explanation from the Association for Convenience and Fuel Retailing is that wholesale prices, local competition, and consumer behavior contribute to this behavior.4 The pass-through delays caused by the time it takes to refine and distribute product provides retailers with an added layer of protection from short-term price shocks. In addition, price-conscious consumers and local competition may lead to retailers adjusting retail prices gradually to avoid price shocks to consumers. Under this gradual price assumption, retailers receive smaller margins when wholesale costs increase and larger margins when wholesale costs decline. With this pricing approach, retailers can recoup lost profits from prior wholesale price advances by delaying retail price declines during periods of falling crude oil prices.

The second position, commonly referred to as the “rockets and feathers” phenomenon, was noted recently by researchers at the St. Louis Federal Reserve Bank.5 This theory argues that wholesale price delays and imperfect local competition largely contribute to the difference in pass-through speed during crude oil price increases and declines. Rising crude oil prices quickly push up wholesale gasoline prices, and as a result, retailers rapidly increase their prices to preserve their narrow margins and maintain profits. This direct pass-through of wholesale price increases results in a rapid rise in the retail prices consumers pay for gasoline. The speed of the increase is compared to that of rockets lifting off. Conversely, during periods of declining crude oil prices, some retailers can hold on to higher margins due to limited local competition and therefore have less incentive to pass along lower prices to consumers. This slow pass-through of price declines is compared to feathers drifting slowly to the ground.

The large decreases in prices for crude oil and retail gasoline, combined with the substantial increase in the margin-based PPI for automotive fuels and lubricants retailing in the second half of 2014 and early 2015, support the existence of a noticeable delay in the passing along of lower prices to consumers. The spike and slow retreat of retail margins for automotive fuels during this period resembles the “feathers” scenario. Eventually, if this situation holds and crude oil prices stabilize at a lower level, margins for automotive fuels should return to the general long-term trend of the index. The PPI measure tracking the average changes in margins received by gasoline stations may provide counterintuitive results at first glance. However, by looking at the various pieces the authors hope that this article provides some understanding of the relationship among crude oil prices, refinery prices, wholesale distribution prices, and the retail pump prices.

This Beyond the Numbers article was prepared by Jeff Rubenstein and Michael Conforti, economists in the Division of Producer Prices and Price Indexes, Office of Prices and Living Conditions, U.S. Bureau of Labor Statistics. Email: conforti.michael@bls.gov; telephone: (202) 691-7728.

1In contrast to all other good-producing industries and most service-providing industries, establishments engaged in wholesale and retail trade purchase goods primarily for direct resale to other businesses and consumers. The PPI views wholesalers and retailers as suppliers of distributive services (rather than goods), because little, if any, transformation of these goods takes place. This approach implies that the output of a wholesale or retail trade establishment is represented by the difference between its selling price of a good and the acquisition price for that same item. As a result, for the trade sector the PPI tracks the average changes in gross margins received by wholesalers and retailers. Gross margins reflect the value added by the establishment for services such as marketing, storing, and displaying goods in convenient locations and making the goods easily available for customers to purchase. Margin is defined as the price at which a retailer sells a good, less the current acquisition price of that same good. For more on margin prices in the PPI, see “Wholesale and retail Producer Price Indexes: margin prices,” Beyond the numbers: prices and spending, vol. 1, no. 8 (U.S. Bureau of Labor Statistics, August 2012, https://www.bls.gov/opub/btn/volume-1/wholesale-and-retail-producer-price-indexes-margin-prices.htm.

3The Price per Gallon (NACS, The Association for Convenience and Fuel Retailing, October 13, 2015), http://www.nacsonline.com/YourBusiness/FuelsReports/2014/Prices/Pages/The-Price-Per-Gallon.aspx.