More BLS articles and information on insurance plans are available at the following links:

How extensive is the employer-provided safety net? BLS looks at life and disability benefits

Who has benefits in private industry in 2012?

Those workers who are unable to work due to injury or illness and who do not have disability insurance coverage through their employers may seek benefits from Social Security Disability Insurance (SSDI).2 The number of SSDI claimants has grown over the past decade as younger workers and those in relatively low-skill, low-pay jobs have applied for benefits.3 This has prompted interest in the amount of coverage for workers in employer-provided disability insurance programs. This issue of Beyond the Numbers examines trends in employer-provided disability insurance coverage over time, explains the basic terms of coverage for typical plans, and estimates the costs to private employers.4

The National Compensation Survey collects data on compensation, which includes wages and salaries and various benefits. Besides cost measures, the program collects data on access, participation, and features of benefits (called provisions), including short- and long-term disability insurance. 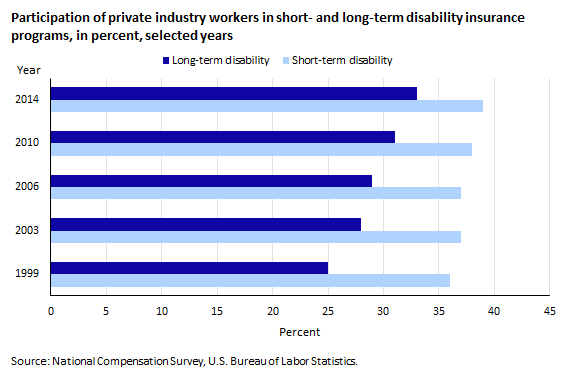 Short-term disability plans are intended to replace lost wages for a short, fixed amount of time. Ninety-three percent of private industry workers are covered by a fixed-duration plan. The median length of coverage is 26 weeks. This is the same across occupational groups and has stayed mostly the same over time. The median salary replacement rate for short-term disability plans is 60 percent, a rate that has stayed roughly the same for many years.6 Among workers covered by a short-term disability insurance plan, 75 percent have a plan with a maximum benefit amount; among those with maximum payout provisions in the plan, the median amount that a worker would be eligible to receive was $584 in March 2014.

Rather than presenting data on all possible combinations of medical care and short- and long-term disability insurance, table 4 presents estimates of the two extremes: those who have access to all three through their employer and those who do not have access to insurance plans.

How much does it cost employers to offer disability insurance to their workers? The Bureau of Labor Statistics estimates this cost on the basis of data from the Employer Cost for Employee Compensation (ECEC) published estimates.7 We start by presenting the estimates of the average hourly cost of wages and salaries for March 2014 in table 5.8 This will provide some perspective on the amount by which employer costs would increase as a result of expanding access to disability insurance.

As seen in table 6, the cost of access for short-term disability and long-term disability across all private industry workers is $0.30 per hour worked ($0.15 each). The estimate ranges from $0.11 for sales and office workers to $0.23 for natural resources, construction, and maintenance workers. There are no reliable estimates for service workers, which is not surprising given that few service workers have access to employer-provided disability insurance. As a whole, however, the cost of providing both short- and long-term disability insurance access to all private sector workers would be approximately 1.0 percent of total compensation cost ($0.30/$29.99). This would cost an employer $624 each year for a full-time (2,080 hour) worker.

Increased access to employer-provided disability insurance programs would fill the gap in benefits for individuals who apply for SSDI.  SSDI benefits are payable the 6th full month after the disability begins, but people usually do not receive benefits until several months later because of delays in applying and processing. Short- and long-term disability insurance provide income protection much faster.

This Beyond the Numbers summary was prepared by Kristen Monaco, economist in the Office of Compensation and Working Conditions, U.S. Bureau of Labor Statistics. Email: monaco.kristen@bls.gov. Telephone: (202) 691-7527.

1 Workers’ compensation covers loss of income due to work-related injuries and illnesses.

4 This study excludes government employers as well as the self-employed, farm workers, and private household workers.

5 Access measures whether an employer makes a plan available to their employees.  Participation measures whether the employee enrolls in such a plan (or fails to opt out of plans in which they are automatically enrolled). Estimates of access, participation, and provisions of disability insurance plans for March 2014 can be found in the BLS publication, “National Compensation Survey: Employee Benefits in the United States, March 2014,” available at https://www.bls.gov/ncs/ebs/.

7 The ECEC provides estimates of the average hourly cost of wages and salaries as well as various benefits, including disability insurance. The ECEC estimates of hourly costs are calculated for all workers, not just those receiving the benefit. We can, however, use the benefit access rate and the average cost to get an estimate of how much it would cost the employer to provide benefit access to all workers.

8 We also use March 2014 data to obtain the average cost per hour for short- and long-term disability insurance programs. Table 6 combines this information with the access rate to obtain an estimate of the employer’s cost of providing access to this benefit.