Defined benefit pension plans can provide financial security to retirees who receive the monthly benefit payments throughout their retirement. Defined benefit plans are pension plans that provide guaranteed income during retirement, and are often based on a formula that considers years of service and a percentage of a worker’s salary. Employers have traditionally offered defined benefit plans to their employees, but the high costs associated with these plans have caused many employers to switch to alternate retirement plan options.1 In March 2015, costs for defined benefit plans for private industry employers were approximately 61 cents per employee hour worked, on average. However, when data are averaged only by the employers that offer these plans, the costs are much higher. In this Beyond the Numbers article, we’ll explore how costs fluctuate by industry, occupation, establishment size, and region, and review trends in costs for employees with access to these plans from 2008 to 2015.

Costs for defined benefit plans are collected by the Bureau of Labor Statistics through the National Compensation Survey. For defined benefit plans, the survey collects data on premiums, administration fees, and dollar amounts placed by employers into pension funds. These amounts may be from cash, stock, corporate bonds, and other financial instruments. For private industry estimates, the National Compensation Survey does not collect actuarial estimates or actual costs of pension benefits paid to retirees.

Benefit costs collected by the survey are converted to hourly rates by dividing the annual costs by the annual hours worked, thus producing the employer costs for employee compensation estimates. These estimates measure compensation costs in cents per hour worked for a specific point in time (for example, the March reference period). The estimates include all employees regardless of access to benefits; this calculation produces lower costs than when eligibility is considered. Benefit incidence rates can be applied to benefit costs estimates to obtain a measure that shows how providing access to a benefit may affect an employer’s hourly labor costs. Costs for only those employees with access to a benefit (called access costs) can be derived by dividing the benefit costs estimate by the benefit access rate.2 For example, if the benefit costs were 48 cents per employee hour worked and 12 percent of employees had access to the benefit then the costs for employees with access would be $0.48 ÷ 12% = $4.00 per employee hour worked.3 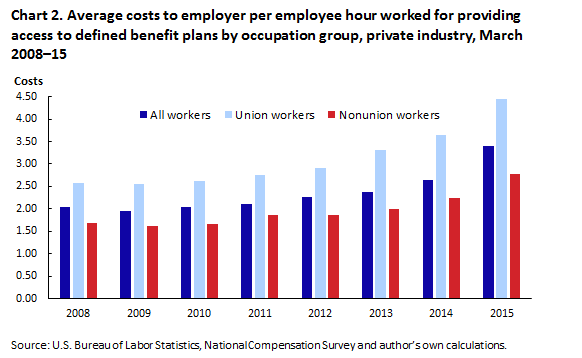 States in the Middle Atlantic and Pacific census divisions had union membership rates that were higher than the national average (11.1 percent) in 2015.6 States in the East and West South Central divisions had rates lower than the national average. The states with the largest numbers of union members were California (2.5 million) and New York (2 million).7  Data show that 25 percent of workers in the Middle Atlantic had access to defined benefit plans in March 2015, compared with 13 percent of workers who had access in the Mountain division. The South region, which consists of the South Atlantic, West South Central, and East South Central divisions, had relatively low levels of access to pension plans despite being the most populated region in the country. (See chart 3.) 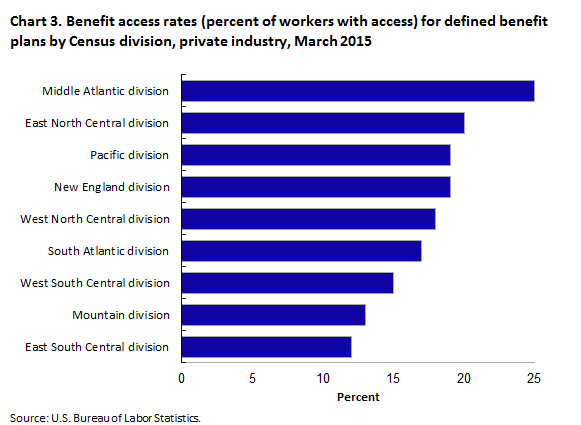 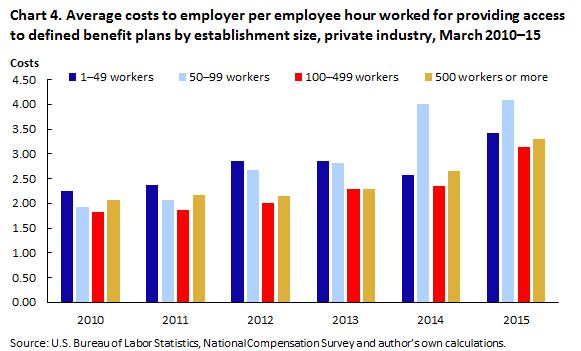 Employers typically pay monthly premiums for benefits such as health insurance, but defined benefit plans are different. Employers have some latitude in deciding when to make payments, although they still must follow legal and accounting guidelines and requirements. Required employer contributions for defined benefit pension plans may fluctuate depending on a company’s investment returns. In defined benefit plans, those responsible for managing the plan must act in the interest of plan participants. Therefore, certain investments are restricted by regulation.9 For example, a large percentage of funds cannot be invested in a company’s own stock. The investment performance of the pension fund plays a role in determining the amount and frequency of employer contributions, data about which are collected through the National Compensation Survey. When plans are underfunded, employers have to catch up and may make additional contributions. When plans are overfunded, employers might not make regular contributions. If a plan earns a rate of return that is equal to or greater than the rate of return promised to retirees, then the plan may become fully funded without additional contributions made by the employer.10

More generous plans have higher associated costs. Employers may offer both a defined benefit plan and a defined contribution savings and thrift plan to provide more generous retirement benefit to their employees.  For defined contribution plans, an employee usually contributes a percentage of his or her salary to an individual account with a savings and thrift plan, and employers may offer to match an employee’s contribution up to a set maximum amount. These activities promote retirement saving as employees increase their retirement savings with additional funds from their employer. More generous plans contribute larger amounts in relation to employee contributions. Other factors that may influence employer contributions include how long an employee has worked for the company and whether the employer chooses a flat rate or a variable rate when matching the employee’s contribution.

Traditional defined benefit plan types use different formulas to calculate the annuity payment. One formula plan type provides retirees with an annuity based on a predetermined percentage of their final earnings. Another formula uses a percentage of wages earned throughout an employee’s entire career at the establishment. A final formula calculates an annuity payment by multiplying the years of service by a specified dollar amount. In addition, employer-contribution formula plans vary based on the policy set forth by employers regarding their specified contribution within the formula.

Nontraditional defined benefit plan types include cash-balance and pension-equity plans. Cash-balance plans promise an employer contribution equal to a percentage of each year’s earnings and a rate of return on that contribution, whereas the traditional defined benefit plans typically promise a flat dollar amount.11 A pension-equity plan provides an annuity benefit in terms of a current lump-sum value determined by providing a schedule of percentages that are accumulated throughout the career of the retiree. Accrual rates may vary based on the employee’s age and length of service.12

Eligibility and features of a plan also affect participation and therefore costs. For example, an employee cannot participate in a defined benefit plan if it is frozen to particular employees, making them ineligible for the benefit. Frozen defined benefit plans are closed to employees not previously participating, or limits are placed on future benefits for some or all active participants. Some frozen plans may no longer allow participants to accrue benefits. Others may change the prospective benefit formula to limit future accruals.13 A soft freeze means that a plan is closed to new entrants, but benefit accruals continue for current participants. A hard freeze indicates that a plan is closed to new entrants, and benefits are no longer being accrued for current participants.14 To reduce costs, employers may freeze plans and provide less generous plan provisions, benefits, and features.

Many factors influence costs to employers that provide access to a defined benefit plan to employees. Administrative aspects, such as policies surrounding a specific plan (generosity, investment, eligibility, etc.), greatly influence the price employers pay for these plans. Such information is employer-specific and may be difficult to collect. Unionization is a useful way to look at the trends in pension costs and access. Data show that lower unionization levels decrease relative access to defined benefit plans, and as the percentage of workers with access decrease, the costs to employers for these plans increase moderately.

This Beyond the Numbers article was prepared by Richard Works, economist in the Office of Compensation and Working Conditions, Bureau of Labor Statistics. Email: works.richard@bls.gov, telephone: (202) 691-6282.

5 “Industries at a glance,” U.S. Bureau of Labor Statistics, www.bls.gov/iag/home.htm.