By Eliana Eitches and Vera Crain

One of the most common topics of conversation, regardless of the time of year or the weather, is gasoline. This topic brings to mind a myriad of issues, such as gasoline’s potential environmental impact, public policy decisions, and alternative fuel sources. But, the seemingly omnipresent issue is the price consumers pay at the pump. Some people become concerned about paying $4.00 or more a gallon. Others talk about the miles per gallon their car obtains. In certain areas, people discuss congested highways with slow-moving vehicles guzzling tanks of gas. With all this attention, it would seem reasonable to assume that those dissatisfied with the price of gas would buy fewer gallons of gasoline as the price per gallon increases. Using information from the Consumer Expenditure Survey (CE) and the Consumer Price Index (CPI), we examine how expenditures for gasoline have changed over time and whether the number of gallons purchased has varied.

This Beyond the Numbers article uses monthly and quarterly average price per gallon of gasoline from the CPI, and dollars spent on gasoline per quarter from the CE. Similar gasoline average price data are available from the Energy Information Agency (EIA) within the Department of Energy. A comparison of the average prices showed the two sources to be similar, with more variations in the data from the EIA. For this analysis, CPI data were selected.1

Data from the CE suggest that individual households (excluding commercial use) buy as many gallons of gas and travel as many or more miles regardless of the price of gasoline.

The law of supply and demand states as prices rise, the quantity of the good that the consumers demand falls. The reverse would also be true: as price fall, consumer demand rises. For most goods, when prices rise, consumers tend to purchase less; and, when prices fall, consumers are willing to purchase more. Consumers may have different sensitivities to prices changes depending on the good. For example, if the price of chocolate rises by 50 percent, consumers may be very sensitive to the price rise and drastically curtail their chocolate purchases. Other goods may not have the same type of consumer response when a similar price change occurs. This variation in the sensitivity to the price change is called elasticity. It is expected that the quantity of gasoline purchased is affected by the price of gasoline and by the economic conditions at that time. Therefore, as the price of gasoline rises the demand should fall. But chart 1 illustrates a different picture. While the dollar expenditures for gasoline fluctuated greatly between 2007 and 2009, and, to a similar extent, in other time periods, the consumption of gasoline remained rather constant. This pattern also emerges in other periods where gas prices fluctuate.

In addition, between 2004 and 2014, the economic climate in the United States changed greatly. At the end of 2007, the United States entered a recession. Generally, in a recession, income and consumption have a tendency to fall. So despite the economic climate, great changes in price per gallon of gasoline, and the corresponding quarterly variation in dollar expenditures for gasoline, households still consumed the same amount of gasoline. This steady consumption indicates that households did not dramatically change their behavior in response to changes in gasoline prices. Instead of a shared road trip with friends, biking instead of driving, or other consumption changes in response to price increases, people likely continued their gas-consumption habits. Something about gasoline is different than other goods that create this static consumer behavior. 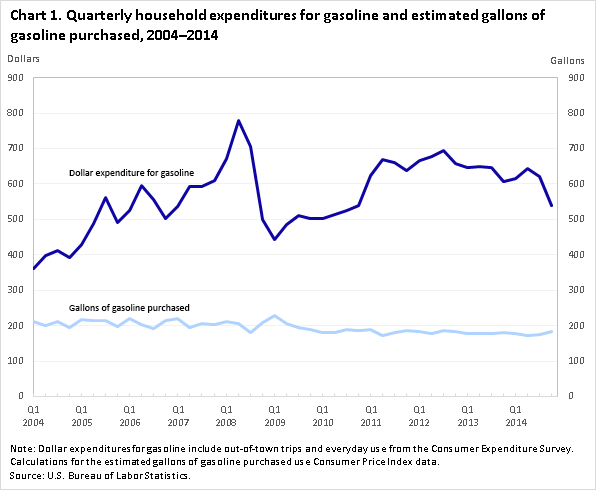 The law of supply and demand predicts consumers should reduce purchases when prices of a good rises. According to chart 1, the estimated gallons purchased by a household has remained rather constant each quarter over the past 11 years. As spending on gasoline (including out-of-town trips) has climbed due to gasoline prices rising, one would believe that it would lead to households purchasing less. However, that is not the trend being displayed and as gasoline prices increased, spending on gasoline also increased. The expectation is that as the price per gallon rises, a corresponding decline in demand for gasoline would occur.

Why doesn’t gasoline follow the pattern of elastic goods?

When the quantity of a good demanded is relatively insensitive to changes in price, the good is said to have a relatively inelastic price elasticity of demand. So, when events happen to change the price of a good, consumers’ demand for that good does not change commensurately. This could be because a good is a necessity. Or, it could be because the good cannot be substituted for another good. The demand for the good may be inelastic because of personal preference, meaning the consumer prefers some amount of consumption regardless of the good’s price.

Tobacco products and certain medications have a low price elasticity of demand and the reasons for their inelasticity varies. In essence, inelastic goods are not easily replaced by another good. If one is prescribed insulin, one needs that specific medication and cannot replace it with another. Similarly, the addictive quality of tobacco causes an inelastic demand for tobacco products for many individuals, despite significant price increases related to taxation and reductions their real income.

Still, while the estimated number of gallons purchased is inelastic in regards to price, the average number of gallons bought per household has drifted lower over the past 11 years. (See chart 2.) Annual estimated gallons of gasoline purchased had been 816 gallons per household in 2004, before climbing to 844 gallons in 2005, and falling from 2010 onward. In 2014, the estimated average for gasoline consumption a year had fallen to 707 gallons. 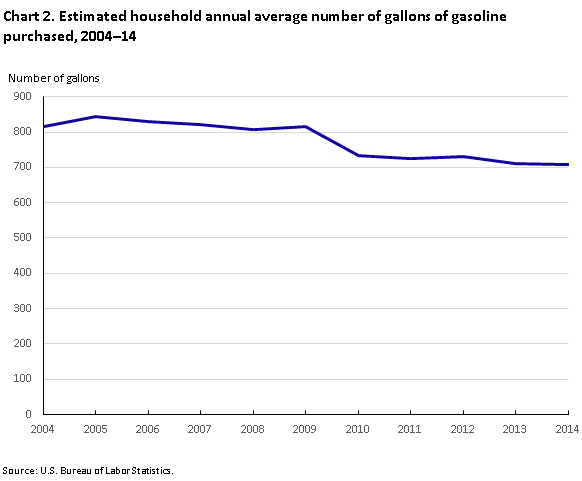 Chart 2 illustrates the gradual decrease in the average number of gallons purchased per household. The decrease may reflect the ability of consumers to elect to choose more fuel efficient cars as they have replaced older vehicles throughout the 11-year span. However, research does show that households tend to keep older vehicles longer as incomes stagnated or declined and the cost of replacement rose.2 The data also suggest a gradual long-term change in consumer transportation preferences. In addition, the CE data show the average number of vehicles owned by households has remained constant at either 1.9 or 2.0 over the same period.

There are many reasons that can make demand for a good inelastic. With gasoline, there are few substitute goods–a good that, if consumed, can reduce the consumption of another good. Examples of substitute goods are cable television and satellite television: if one consumes cable television, one will likely not consume satellite television, and vice versa. Another example, ignoring the taste preferences, would be between two similar tasting colas. If the price of cola A increases relative to the price of cola B, one may substitute cola A with cola B.

With gasoline, one may take public transportation instead of driving, but that is dependent on public transportation being available. Another potential substitute would be utilizing automobiles that operate on alternative energy such as electricity. Because electric cars are more expensive than gas-fueled vehicles and the infrastructure for charging these vehicles is not widely established in the United States this option is out of reach for most. Walking, biking, or carpooling also represent substitutes for gasoline consumption. But, there is a limited distance one can walk or bike, and carpooling may not be an available option. There has been a decrease in annual consumption of gasoline. (Chart 2.) However, CPI and CE data do not reflect that driving available vehicles that get better miles per gallon have caused a major decrease in average household consumption based on the price per gallon.

Without available substitutes, the demand for gasoline remains constant. Combined with the car culture of the United States, where most people use an automobile as their primary form of transportation, gasoline is in a subclass of normal goods called “necessity goods.” Meaning the good is a necessity for many daily functions and reducing consumption is difficult even when the good becomes increasingly costly. Gasoline is difficult to substitute and necessary to many citizens for daily life. Considering these two factors a relatively inelastic demand for gasoline becomes intuitive.

Noting the continuous demand for gasoline and the relative stability of the estimated gallons of gasoline bought quarterly between 2004 and 2014, it is difficult to identify what will alter this trend. It seems that a doubling in price per gallon did not alter consumer’s consumption habits. Understanding consumers’ purchasing behavior gives us insight on how households may navigate budgeting the rest of their discretionary spending. Because gasoline is probably deemed “necessary”, other household purchases may get delayed or curtailed when the price of gasoline rises.

This Beyond the Numbers article was prepared by Eliana Eitches formerly a summer intern and Vera Crain, economist in Office of Prices and Living Conditions, U.S. Bureau of Labor Statistics. Email: crain.vera@bls.gov; telephone: (202) 691-5640.

[1]Similar gasoline average price data are available from the Energy Information Agency (EIA) within the Department of Energy. A comparison of the average prices showed the two sources to be very similar, with more fluctuations in the data from the EIA. For the purpose of this analysis, CPI data were selected. See the analytical article comparing CPI and EIA measures of gasoline price change by Malik Crawford and Stephen B. Reed, “Measures of gasoline price change,” Beyond the Numbers: Prices Spending, vol. 2, no. 23 (U.S. Bureau of Labor Statistics, September 2013), https://www.bls.gov/opub/btn/volume-2/measures-of-gasoline-price-change.htm.