Labor productivity, defined as real output per hour worked, is a measure of how efficiently labor is used in producing goods and services. There are many possible factors affecting labor productivity growth, including changes in technology, capital investment, capacity utilization, use of intermediate inputs, improved managerial skills or organization of production, and improved skills of the workforce. In this article, all references to labor productivity are labeled as productivity for ease of reference. In addition, labor compensation, a measure of the cost to the employer for securing the services of labor, is defined as an employee’s base wage and salary plus benefits. All references to labor compensation are on a per-hour basis and are adjusted for price change but are labeled as compensation for ease of reference.4 Measures of hours worked and compensation cover all workers including production, supervisory, self-employed, and unpaid family workers.

The productivity–compensation gap by sector and industry

To understand the productivity–compensation gap at an industry-level, it is helpful to first consider this relationship in different sectors of the economy. Each sector referenced below in chart 1 represents the combined activity of many individual industries that perform a similar type of activity.5

Productivity outpaced compensation for the 1987–2015 period in all sectors with significant industry coverage except for the mining sector. (See chart 1.) Some sectors including information, manufacturing, and retail trade exhibited major gaps between productivity and compensation, while other sectors such as accommodation and food services and other services showed slight differences. Compensation in chart 1 has been adjusted for inflation with the BLS Consumer Price Index (CPI). 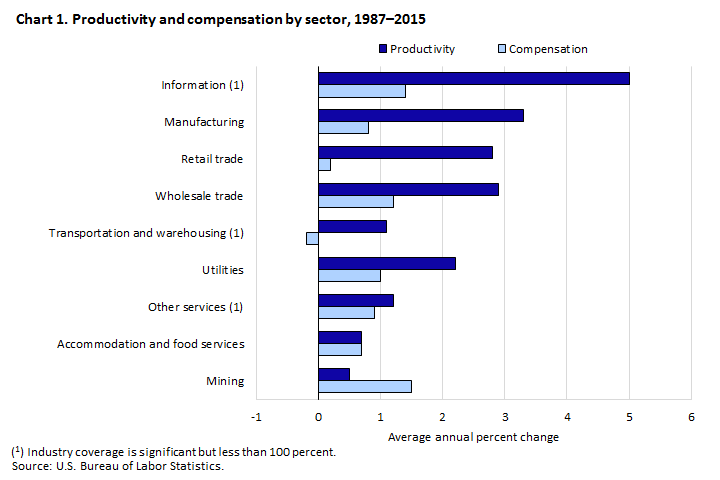 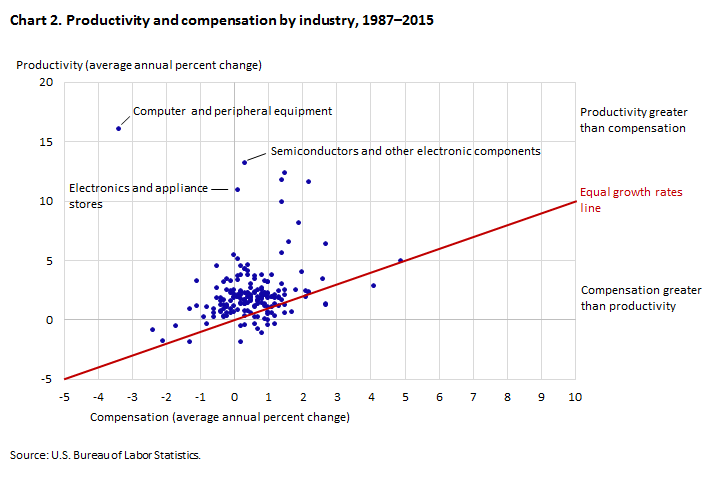 Does the type of price adjustment matter?

As mentioned above, compensation is calculated in real terms by adjusting nominal values to exclude changes in prices over time. The price indexes that are used to adjust dollar amounts for changes in prices are referred to as “deflators.”

The Consumer Price Index (CPI) is typically used to adjust compensation as it measures how the prices of a basket of consumer goods change over time. Thus, using the CPI shows how changes in workers’ purchasing power compare to productivity within their respective industries. In most cases, productivity gains did not equate to a proportional rise in workers’ purchasing power of goods and services. (See chart 2.)

However, the CPI might not be the most appropriate deflator to use when comparing compensation to productivity. Workers are compensated based on the value of goods and services produced, not on what they consume. Using an output price deflator, a measure of changes in prices for producers, instead of the CPI is an alternative that better aligns what is produced to the compensation that workers receive. Each industry has its own unique output deflator that matches the goods and services that are produced in that industry.6

Charts 2 and 3 show an interesting contrast in employee compensation—employees are both consumers and producers. Using the CPI as a deflator is appropriate for analyzing the purchasing power of employees. However, from a producer perspective, using the output deflator is more appropriate for comparing the compensation workers receive for the goods and services they produce in their industry. 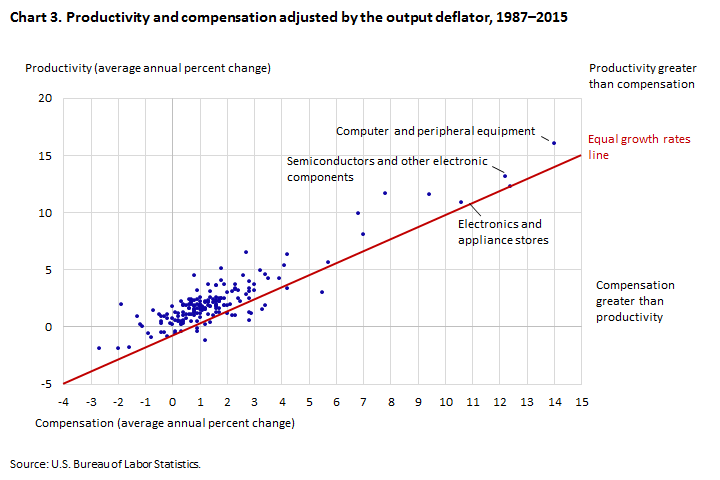 Components of the productivity–compensation gap

The gap between productivity and compensation can be divided into two components: (1) the difference between compensation adjusted by the CPI and by the output deflator, as detailed in the previous section and (2) the change in the labor share of income.7 The labor share of income measures how much revenue is going to workers as opposed to the other components of production—intermediate purchases and capital.8

Using the power generation and supply industry as an illustrative example, chart 4 shows how the overall gap in labor productivity and compensation within an industry can be divided into these two components. In this case, the decline in labor share and the difference in deflators contributed equally to productivity rising faster than compensation over the period studied. The composition of the gap, however, varies by sector and industry. For example, the software publishing industry posted a 42-percent decline in its labor share while the newspaper, periodical, book, and directory publishers industry experienced a 22-percent increase in its labor share. All 183 industries are affected differently by current economic trends, which would explain why the labor share and difference in deflators vary by industry. 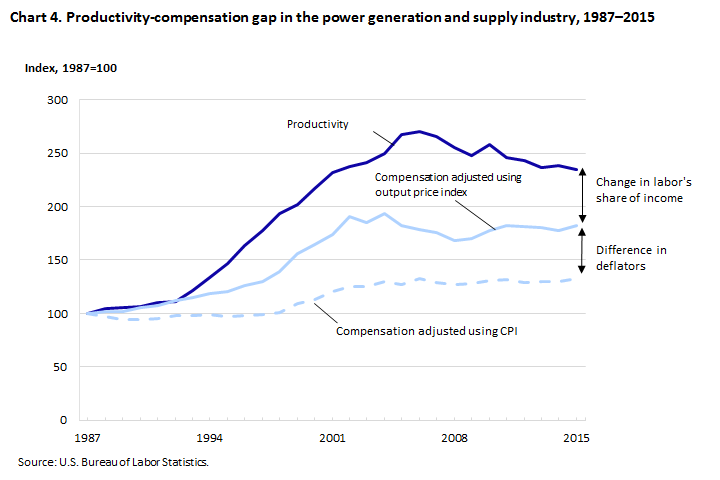 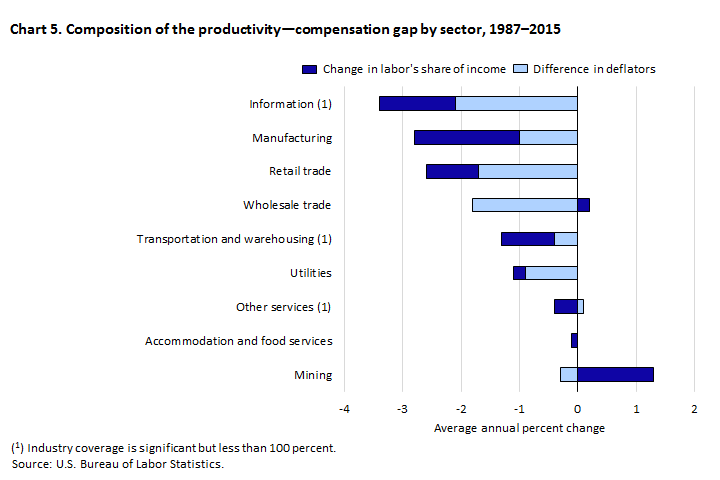 The labor share of income declined in 77 percent of industries studied. This means that a growing share of income was going to factors of production other than employee compensation over the period studied. Factors of production include labor, capital (e.g. machinery, computers, and software), and intermediate purchases (purchased materials, services and energy that go into producing a final product). The median growth rate in the labor share of income was -0.6 percent per year. The median effect of the change in labor share was the same as that of the difference in deflators. 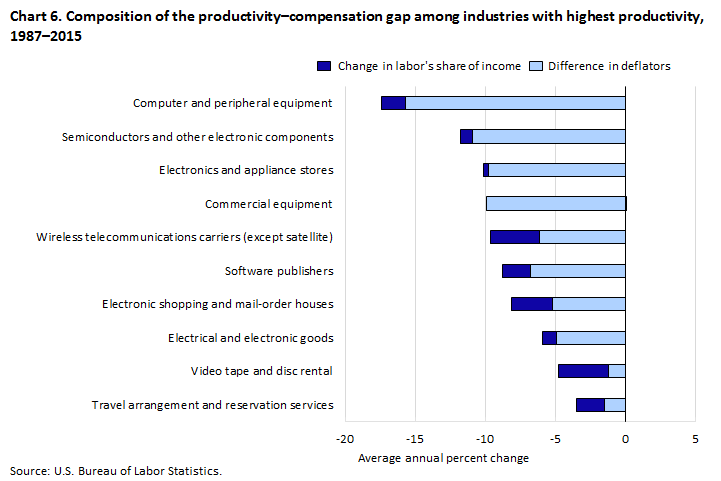 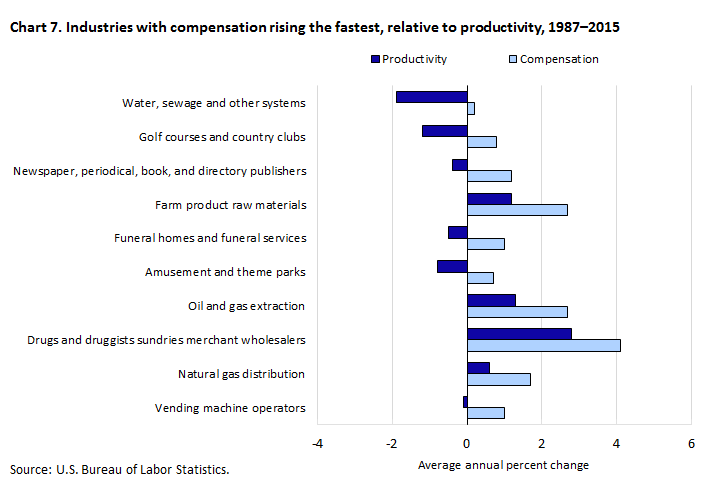 Industries in which compensation grew the fastest relative to productivity include the water, sewage, and other systems industry; the golf courses and country clubs industry; and the newspaper, periodical, book, and directory publishers industry. The first industry had a large difference in deflators, the second industry saw a large increase in the labor share, and the third industry had a combination of these two components affecting the gap. All three of these industries had productivity declines over the period.

Although the difference in deflators explains much of the gap, as mentioned earlier, the share of income going to workers has declined in 77 percent of industries since 1987.

Using the information sector as an example, we can see in chart 8 that some industries had significant declines in labor’s share of income while others had modest declines or even increases from 1987 to 2015. The largest declines in labor share were in newer, information technology-related industries such as software publishing and wireless telecommunications carriers, where labor share declined by 23 and 16 percentage points respectively. These industries also saw a large rise in output and productivity in this period. In contrast, labor share increased by 7 percentage points in the more established newspaper, periodical, book, and directory publishing industry, which declined in output and productivity. 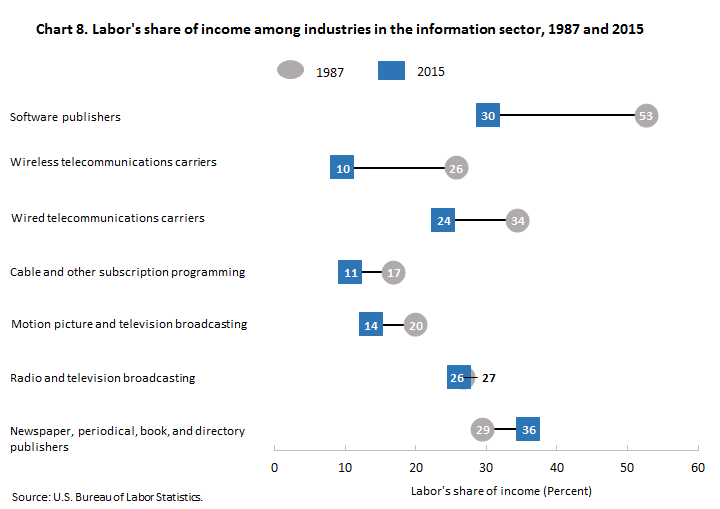 It is important to note that the reason for declining labor share will likely vary significantly by industry. Here are some plausible explanations:

Globalization – Some of the income that might have gone to domestic workers is now going to foreign workers due to increased offshoring (i.e. the outsourcing of production and service activities to workers in other countries). This could have caused intermediate purchases to increase and labor compensation to decrease.10

Increased automation – It is possible that increased automation has been leading to an overall drop in the need for labor input. This would cause capital share to increase, relative to labor share as machines replace some workers.11

Faster capital depreciation – It is possible that the capital used by industries is depreciating at a faster rate in recent years than in the past. These assets include items such as computer hardware and software that are upgraded or replaced more frequently than machinery used in prior decades. This faster depreciation could require a higher capital share to cover upgrade and replacement costs.12

The American economy is dynamic and changes over time. These changes appear in the productivity–compensation gap and its components. Chart 9 shows the components of the gap in each sector for the 1987–2000 and 2000–2015 periods. These periods roughly divide the data in half and use an important point in the business cycle as a breakpoint. Several observations can be made based on this chart. 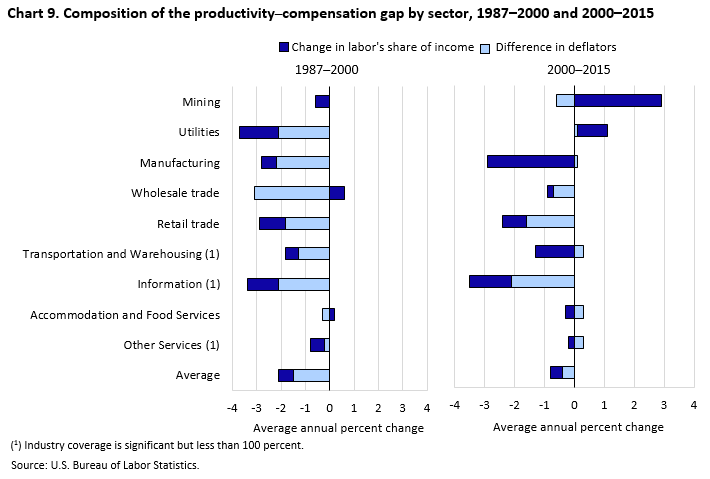 First, the average productivity–compensation gap among the sectors grew faster in the first period than in the second. This was mainly due to changes in the utilities and wholesale trade sectors.

Second, the difference in deflators accounted for most of the gap on average in the first period, but had a smaller effect on average in the second period. This was particularly true in the utilities, manufacturing, wholesale trade, and transportation and warehousing sectors.

What about changes over time in detailed industries? Chart 10 shows how the components of the gap changed over time in industries with the highest employment in 2015. These 10 industries, ordered by employment, made up about 39 percent of the total employment of the 183 industries studied. The first three industries in the chart had component effects that flipped direction from one period to the next. Other general merchandise stores industry, which includes warehouse clubs and supercenters, had a very large drop in labor’s share of income in the first period and a much more modest drop in the second. Charts 9 and 10 show that the productivity and compensation dynamics of sectors, and the industries within them, are changing over time and will likely continue to do so as the economy evolves. 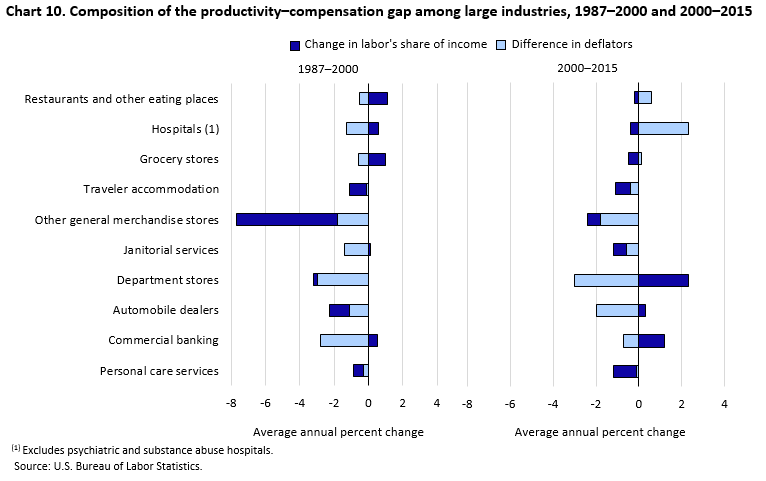 Studying the productivity and compensation trends of industries can help us better understand the productivity–compensation gap observed in the broader economy. It can show which industries have the largest gaps and the extent to which gaps are widespread. It is important to choose an appropriate deflator for compensation when comparing to productivity. Failing to do so can exaggerate the gap, especially for high productivity industries. A full 83 percent of industries studied here had productivity–compensation gaps when the same deflator was used for output and compensation. These gaps came from a declining labor share of income. Sectors with the strongest declines in labor share included manufacturing, information, retail trade, and transportation and warehousing. Although the causes of the decline in labor share are still unclear, focusing on industries may help to isolate and understand the causes unique to each industry.

This Beyond the Numbers article was prepared by Michael Brill, Economist in the Division of Industry Productivity Studies, Office of Productivity and Technology, Email: brill.michael@bls.gov, Telephone: (202) 691-5657.

2 For example, see Barry Bosworth and George L. Perry, “Productivity and Real Wages: Is There a Puzzle?” Brookings Papers on Economic Activity, 1:1994, https://www.brookings.edu/bpea-articles/productivity-and-real-wages-is-there-a-puzzle/.

5 The sectors in this article are 2-digit NAICS sectors. The detailed industries, defined in the third endnote, are components of these sectors.

6 Industry output deflators are mostly based on Producer Price Indexes (PPIs) unique to each industry. PPIs measure price change from the perspective of the seller. Consumer Price Indexes (CPIs) for individual products are used to deflate output in some industries (e.g. industries in retail trade).

7 The rates of change calculated in this article are compound annual growth rates. One must use logarithmic changes for the components of the gap between productivity and real hourly compensation to equal the total gap in all cases. For most industries, the components sum up to the total gap using either method but may differ by 0.1 percent due to rounding.

11 See Maya Eden and Paul Gaggl, “On the Welfare Implications of Automation,” Policy Research Working Paper, No. 7487, World Bank Group, November 2015, http://documents.worldbank.org/curated/en/2015/11/25380579/welfare-implications-automation. Some of the decline in labor’s share of income can be linked to an increase in the income share of information and communication technology (ICT). ICT effects may have had a larger impact on the distribution of income among workers.

12 See Dean Baker, “The Productivity to Paycheck Gap: What the Data Show,” Center for Economic and Policy Research, April 2007, http://cepr.net/publications/reports/the-productivity-to-paycheck-gap-what-the-data-show This is one of many articles that documents the fact that a rising share of GDP goes to replace worn-out capital goods. Income going towards replacing these goods should not be expected to raise living standards.