More BLS articles related to the construction industry are available online at the following links:

“Construction employment peaks before the recession and falls sharply throughout it”

Due to the complex and custom nature of construction, BLS employs a ‘model’-based methodology that differs from most other PPIs. BLS, working with professional cost-estimating firms, reviews a list of recent construction projects for a particular type of structure and develops multiple nonresidential construction project models to accommodate regional variations in building design. The building models consist of a series of detailed component projects, material and labor costs, as well as quantity estimates for each job that are updated on a quarterly basis. As part of the monthly PPI survey, participating construction contractor firms, including general contractors and specialty trade contractors, are asked to review a sample of project descriptions and indicate the overhead and profit (OH&P) markup that their firm would apply to the given cost estimates to come up with a final bid price. These markups are added to the cost estimates to establish final output prices that are used in the calculation of the nonresidential building construction index.

Since 2004, when the first nonresidential building construction index was introduced, price movements within the nonresidential building construction sector have loosely paralleled the overall health of the U.S. economy, as shown in chart 1. Nonresidential building construction as a whole experienced a significant growth period from its introduction through early 2009. This period of rising prices was followed by a significant decline near the end of the Great Recession, (highlighted in chart), followed by a slow, but steady increase as the economy recovered. For example, beginning in December 2004, the new warehouse construction index increased 31.0 percent before peaking in January 2009. It then fell 6.0 percent to a postrecession low in March 2010, before recovering 10.8 percent through February 2014. Overall, it had a 3.9-percent average annual increase over this span of time. Although each index has a different base period, the indexes for school, office, and industrial building construction, showed similar growth patterns during and after the recession. The index for the construction of healthcare buildings, which began in 2012, exhibits the same steady growth. 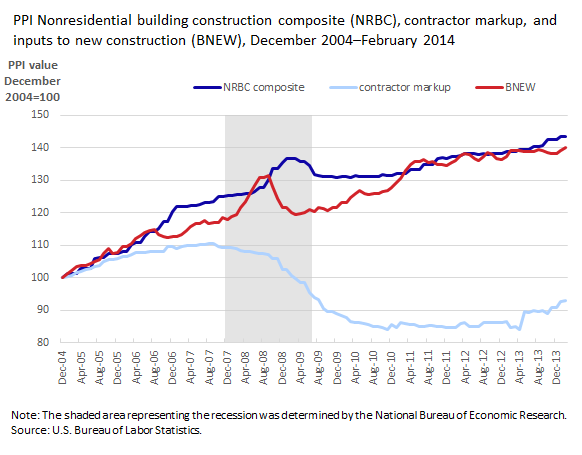 To gain a better understanding of the recent construction sector business cycle, BLS conducted an analysis of overhead and profit markup behavior. These data are of particular interest because they come directly from active contractors in the field, and the supply and demand of work is a key factor in any contractor’s markup decision. A weak construction market will increase competition for the little work that is available, driving markups down, whereas a strong market will have the opposite effect. Therefore, a contractor’s markup on a bid is an indicator of their perception of construction strength or weakness. For example, during the Great Recession, many contractors reported that the limited volume of available projects created an extremely competitive bidding environment. Some even indicated that they were bidding at cost in order to retain employees and avoid closing.

These data are featured in the TED article, Consumer expenditures rise in 2011.

These data are featured in the TED article, Consumer expenditures rise in 2011.

Access to such a large volume of overhead and profit markup data, as well as monthly phone contact with building contractors in the PPI survey, puts BLS in a unique position to analyze the important role this price component plays in determining final output prices. An aggregate, research index of the overhead and profit markup data was created to aid in this analysis.