The natural gas boom in the United States, driven primarily by shale gas, has greatly contributed to the decline in overall natural gas prices over the last decade.1 However, consumers of natural gas often do not experience price changes equally. Regional variations in pipeline access, storage facilities, production, weather, and consumption all influence the price of natural gas at a local level—meaning the cost of heating a home in Louisiana may be drastically different from the cost of heating a home in Massachusetts.

In October 2016, the Bureau of Labor Statistics (BLS) introduced regional detail for the Producer Price Index (PPI) for natural gas distribution (with historical data back to 2012). These indexes allow for a regional analysis of how the changing natural gas market is affecting prices for end users.2 This Beyond the Numbers article examines the PPI regional natural gas distribution indexes at the residential level to explore movements that would not be readily apparent in a national-level index. Studying the regional indexes unveils unique trends among the indexes caused by differences in pipeline infrastructure, weather patterns, and seasonal influences.

Largely due to the shale revolution, the natural gas industry in the United States has grown rapidly over the last several years.3 Between 2005 and 2016, U.S. production of dry natural gas increased about 50 percent, making the United States the largest producer of natural gas in the world. (See chart 1.)4 This boom in production directly led to significant declines in natural gas prices. For example, the Henry Hub natural gas spot price, often used as a national benchmark for natural gas commodity prices, decreased from $8.69 per million British Thermal Units (BTU) in 2005, to only $2.52 per million BTU in 2016.5 Although only one factor in a customer’s monthly bill, natural gas commodity prices play a key role in determining the price for natural gas used in homes, businesses, industry, and electric power plants.

With the growing importance of the natural gas market, additional detail in the form of regional indexes is helpful in analyzing this industry. The regional producer price indexes for natural gas distribution break out national PPIs into nine distinct sections that correspond to the U.S. Census regional divisions.9 There are four primary U.S. Census regions, which are further separated into the nine divisions: New England, Middle Atlantic, South Atlantic, East North Central, East South Central, West North Central, West South Central, Mountain, and Pacific. Figure 1 shows which states are contained in each section.

How infrastructure and production create price variations for residential customers

As natural gas production and demand grow, the need for pipelines to transport natural gas from its extraction point or storage locations to consumers increases. A lack of pipelines creates difficulty in moving natural gas across different regions, and this constraint is a primary contributor to regional differences in natural gas prices.10

Rising production in the Middle Atlantic is only part of the reason residential natural gas prices trended lower in that region since June 2012. The region’s relative lack of pipeline infrastructure also contributes to the area’s low price environment. According to analysis by the Energy Information Administration (EIA), pipeline infrastructure  that delivers natural gas to consumers and export locations has not kept pace with the growth in natural gas production in the Middle Atlantic region. Due to limited pipeline capacity, producers are unable to move oversupplied gas out of the region or to the coast for export, causing relatively lower localized natural gas prices. However, many pipeline projects are currently under development in the region in an attempt to allow producers in the area to transport their natural gas outside of the Middle Atlantic region.13

How residential prices respond to weather and seasonal changes

Regional variations in weather can also play a major role in residential natural gas distribution prices. In early 2014, a large cold wave, commonly known as the “2014 Polar Vortex,” affected large parts of the northern and eastern United States.14 The cold wave resulted in the 2013–2014 winter being one of the coldest on record in the upper Midwest.15 As temperatures decline, demand for natural gas increases as residential customers need more natural gas to heat their homes, resulting in higher natural gas costs, which are typically passed on to the consumer through a purchased gas adjustment in the customer’s bill.

In Michigan, the natural gas spot price for the Michcon Hub, which serves the greater Detroit area, central Michigan, and Michigan’s Upper Peninsula, rose over 85 percent between January 2014 and March 2014 as cold temperatures sent natural gas demand and spot prices soaring.16 Although the price of the natural gas commodity only makes up about one-third to one-half of a customer’s bill, the increase in local spot prices for natural gas in the region supplied by the Michcon Hub resulted in a significant rise in the East North Central regional index during that period.17 Chart 3 shows both the residential East North Central index and the Michcon Hub spot price spiking during the 2014 cold wave. By comparison, the cold wave had much less of an effect on the East South Central region, with the residential index rising only 3.2 percent between January 2014 and March 2014, compared with the East North Central residential index increase of 18.9 percent over the same period.

In addition to isolated weather events playing a role in regional price indexes, regular seasonal price movements also vary across regions. While essentially all regional indexes face upward pricing pressure during the winter heating season, the New England region exhibits the most extreme seasonal movements. This is due to a combination of high natural gas demand in the winter and relatively little capacity to transport natural gas into the region, despite a growing reliance on natural gas usage within the region.18 As chart 4 shows, the New England residential natural gas index regularly increases sharply each November and later retreats back to prices closer to prewinter levels in May.

While a lack of pipelines in the Middle Atlantic causes lower prices in the region because producers are unable to move the natural gas out of the region, causing oversupply, New England faces the opposite problem.19 New England produces almost no natural gas, which means the area relies on its limited interstate pipeline network for its natural gas supply.20 When winter arrives and natural gas demand increases, prices spike in order to balance the high demand and tight supply conditions caused by New England’s limited pipeline capacity.

The seasonal residential price changes in New England contrast with the price movements in other regions and nationally. The Pacific region saw tepid price growth during the 2012–16 winter periods, averaging a residential natural gas increase of only 0.8 percent with only small changes outside the 2013–14 winter, which saw residential natural gas prices increase 7.5 percent. Residential prices in the West North Central region, though facing cold winters like New England, only saw an average increase of 4.2 percent during the 2012–16 heating seasons. This is in large part due to a more robust natural gas pipeline network and regional production of natural gas in North Dakota and Kansas. (See figure 2.) This map of the United States interstate and intrastate pipeline network illustrates the large concentration of pipelines around the U.S. Gulf Coast and Oklahoma, while other areas, such as New England and much of the West Coast, are shown to have relatively few natural gas pipelines.21 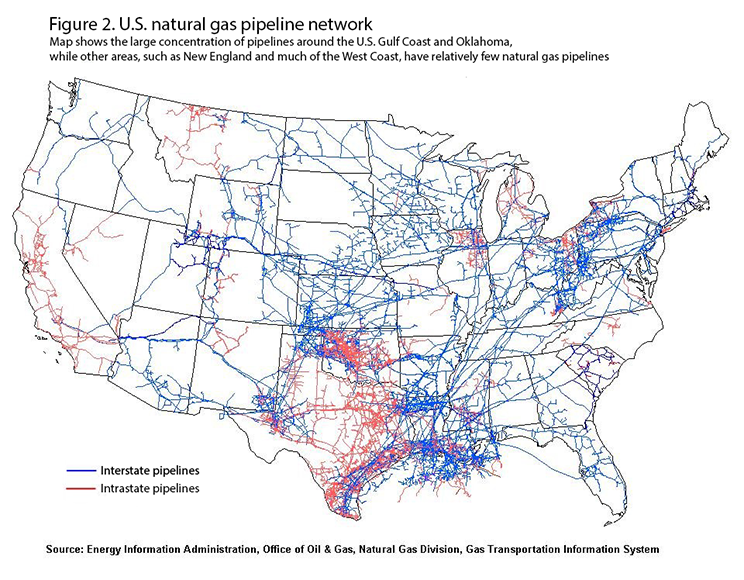 This Beyond the Numbers article was prepared by Stephen York, economist in the Office of Prices and Living Conditions, U.S. Bureau of Labor Statistics. Email: york.stephen@bls.gov, telephone: (202) 691-7939

1 PPI Energy and Chemicals Team, “The effects of shale gas production on natural gas prices,” Beyond the Numbers: Prices and Spending, vol. 2, no.13 (U.S. Bureau of Labor Statistics, May 2013), https://www.bls.gov/opub/btn/volume-2/the-effects-of-shale-gas-production-on-natural-gas-prices.htm.