A cohort component analysis of the 2007–2009 recession

The period 2004–2007 is used to represent a typical nonrecessionary period, and employment change is calculated for 5-year age cohorts over that period. These percent changes in employment from the 2004–2007 period were applied to cohorts with the identical age ranges in 2007—for instance, the percent change for 21-to-25-year olds in 2004–2007 was applied to people ages 21 to 25 during the 2007–2010 period—to come up with projected 2010 employment for each cohort using the following equation:

To implement this cohort component model, microdata from the Current Population Survey (CPS) for the years 2004 and 2007 were used to calculate employment for each cohort. Table 1 shows the total employment in each of the cohorts along with the percentage change in employment between the years 2004 and 2007. For example, employment of the cohort that was 21 to 25 years old in 2004 grew from about 14 million in 2004 to about 16 million in 2007, a growth rate of about 14 percent.

Projected employment levels that were estimated using the model differed from actual survey estimates in several ways, as discussed below. 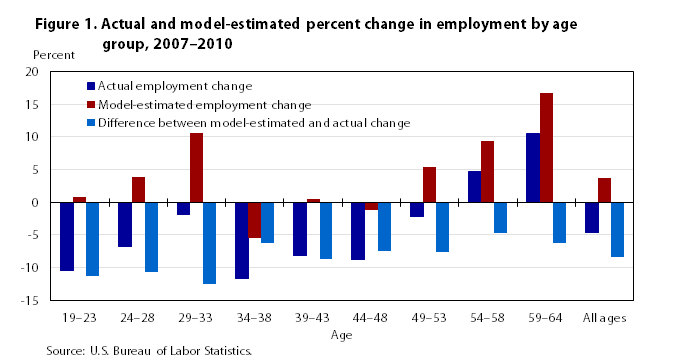 When looking at the differences between actual and model-predicted percentage changes in employment for each age group, we found that younger workers fared worse than other age groups during the recession. The three age groups comprising workers between 19 and 33 years of age were the only age groups to have a difference of more than 10 percentage points between their actual and model-predicted percentage changes in employment between 2007 and 2010. Thus, even though workers ages 34 to 38 in 2010 experienced the largest absolute decline, younger workers ages 19 to 33 in 2010 were furthest from reaching their model-predicted level of employment. 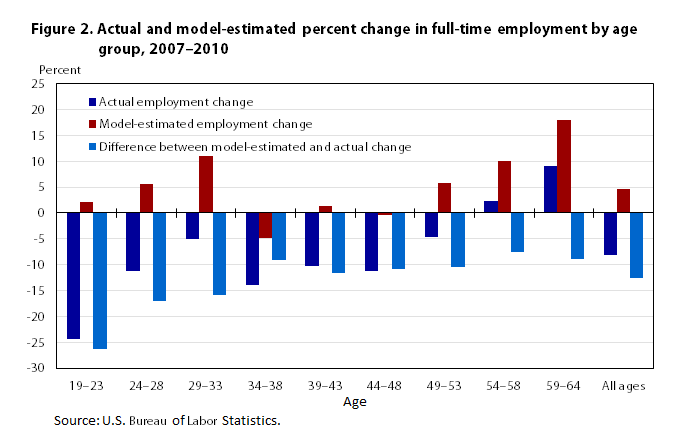 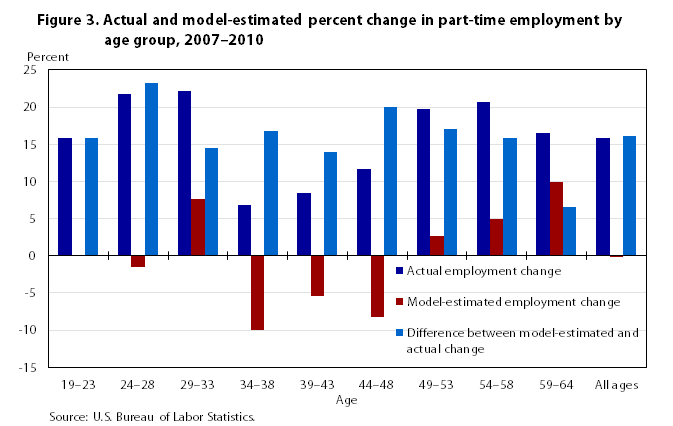 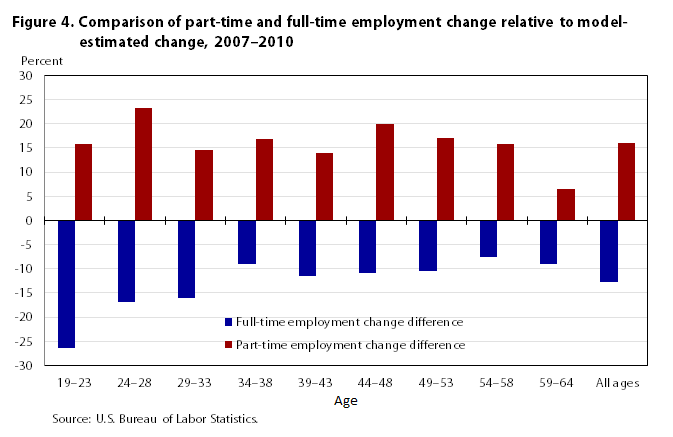 Differences between actual and model-predicted changes in full-time employment were not as dramatic for older age groups as for younger age groups, although the directions of these changes were the same. For example, employment of full-time workers ages 34 to 64 years of age was between 8 and 12 percentage points less than the model predicted in 2010, compared with a range of 17 to 26 percentage points less for workers ages 19 to 33. However, the differences between actual and model-predicted changes in part-time employment show no discernable pattern based on age, with employment of all age groups higher than the model predicted in 2010 (see figure 4).

Natural resources, construction, and maintenance occupations experienced the largest actual employment decline between 2007 and 2010 at 17 percent, which coincides with the collapse of the housing bubble during this time. The cohort model predicted that this occupational group would have the largest growth, 7 percent, which was also a consequence of the inflated growth produced by the housing bubble. The large increase predicted by the model and the large decline in actual employment caused this occupational group to have a 24-percentage-point difference between the actual and modeled employment change, the largest such change.

The 11-percent employment decline in production, transportation, and material moving occupations was the second largest decline in actual employment. Nearly half of this occupational group is employed in the manufacturing industry, which was hit particularly hard by the recession. The model predicted that employment would remain stable

Management, business, science, and arts occupations, as well as sales and office occupations, experienced differences between actual and modeled employment of 7 and 8 percentage points, respectively. This is similar to the 8-percentage-point difference experienced by the economy as a whole. However, for management, business, science, and arts occupations, the difference stemmed from lost potential growth as employment only declined by 1 percent, whereas sales and office occupations actually experienced a 7-percent decline and only lost 1 percentage point in potential growth.

The widest gap between actual and modeled levels of employment growth occurred in goods-producing industries. The model-predicted employment in goods-producing industries such as construction and manufacturing would increase by 3 percent between 2007 and 2010, but employment actually decreased by 18 percent, a difference of 21 percentage points. These declines were largely due to the collapse of the housing bubble and the negative impact the recession had on manufacturing. These results coincide with the occupational analysis that showed occupations heavily concentrated in these industries, such as construction and extraction occupations and production occupations, had the largest differences between actual and model-predicted employment.

The smallest differences between model-predicted and actual employment growth occurred in the government and the health care and education sectors. Employment in government was unchanged between 2007 and 2010 compared with a modeled growth rate of 4 percent. The difference between actual and modeled growth was even smaller for the health care and education industry sector, where employment grew by 4 percent, only 1 percentage point less than the model predicted. These industries are often considered to be recession proof because the services they provide are thought of as essential and are not subject to the same changes in demand that recessions cause in other industries.

The model-predicted employment in service-providing industries excluding health care and education would grow by 4 percent, but employment actually declined by 4 percent, a difference of 8 percentage points between the actual and modeled employment change. Unlike health care and education, the service-providing industries in this sector are more susceptible to changes in the business cycle. For example, retail trade experienced losses during the recession that were due to declines in consumer spending. Additionally, the collapse of the housing bubble and the tightening of credit markets had a severe impact on the financial services and real estate industries.

IN SUMMARY, while the recession negatively affected employment levels for all age groups and for most occupations and industries, younger workers and full-time workers, as well as jobs related to construction and manufacturing, were affected more sharply than predicted by the cohort-based model.

Brian Roberts is an economist in the Office of Occupational Statistics and Employment Projections, U.S. Bureau of Labor Statistics.

Dalton Terrell is an economist in the Office of Occupational Statistics and Employment Projections, U.S. Bureau of Labor Statistics.

Construction employment peaks before the recession and falls sharply throughout it, Monthly Labor Review, April 2011.