Multiple jobholding in states in 2013

Multiple-jobholding rates at the state and regional levels vary considerably from the national average.

In 2013, the multiple-jobholding rate1 (the percentage of individuals who hold more than one job) in indi­vidual states continued to vary con­siderably from the national average of 4.9 percent, a rate that has been unchanged since 2010. (See figure 1 and table 1.) Twenty-three states had multiple-jobholding rates significantly higher than the national average, 8 states had significantly lower rates, and 19 states and the District of Colum­bia had rates that were not significantly different from the U.S. average. 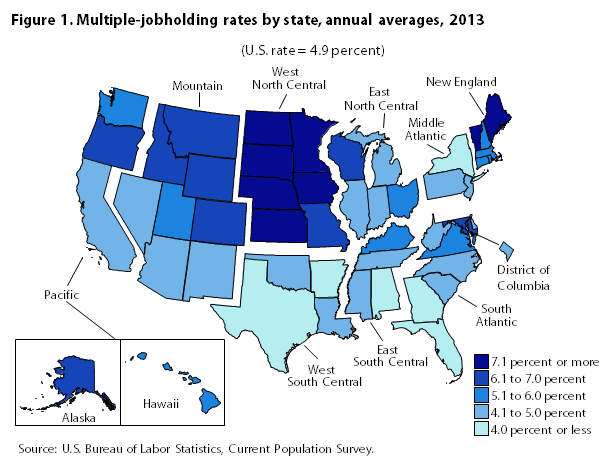 The U.S. multiple-jobholding rate has declined gradually or remained flat each year since peaking at 6.2 percent in 1996. Among the states, 47 states and the District of Columbia had lower multiple-jobholding rates in 2013 than in 1996. The remaining 3 states had rates that were only marginally higher over that 17-year span. The largest declines from 1996 to 2013 occurred in Hawaii and Wisconsin (-3.6 percentage points each), Idaho (-3.4 points), and Montana (-3.3 points).

1 Data for this report are derived from the Current Population Survey (CPS), a survey of about 60,000 households selected to represent the U.S. population 16 years and older. The survey is conducted monthly by the Census Bureau for the Bureau of Labor Statistics. Multiple jobholders are those persons who report, in the reference week of the survey, that they are wage or salary workers who hold two or more jobs, self-employed work­ers who also hold a wage or salary job, or unpaid family workers who also hold a wage or salary job.

Multiple jobholding in states in 2011, Monthly Labor Review, May 2012.

top Back to Top
close or Esc Key
Recommend this page using: