As California’s labor market recovery continues in 2014, a lot of attention is being paid to the Bay Area technology industry, including the industries with a strong presence in Silicon Valley. Employment in this part of the economy has grown at a rate that has propped up the recovery of all nonfarm employment throughout the state. This surge in employment is particularly interesting because it highlights the difference in how northern and southern California have fared recovering jobs after the Great Recession.1

The current rate of growth in technology contrasts greatly with this industry’s performance in the wake of the 2001 recession. During that period, the tech industry suffered a substantial decline. As a result, large, northern California cities like San Francisco and San Jose lagged behind their southern counterparts—including Los Angeles, San Diego, and Riverside. Southern California cities generally benefited from having smaller technology centers, and were buoyed by their dominant leisure and hospitality industry.2

As the state recovers from the 2007–2009 recession, the tables have turned. Employment in technology-driven industries is growing at a faster pace than other industries. Accordingly, employment growth in several large, northern California cities is outpacing growth in southern parts of the state.

The first step in the analysis requires calculating recovery ratios of the four selected sectors in each of the eight large areas studied. Of the eight areas, only three had recovery ratios greater than 1.00. Values range from 0.96 in Sacramento—Arden—Arcade—Roseville to 1.07 in San Francisco—San Mateo—Redwood City. As figure 1 shows, two of the three Bay Area localities stand out with the highest recovery ratios. 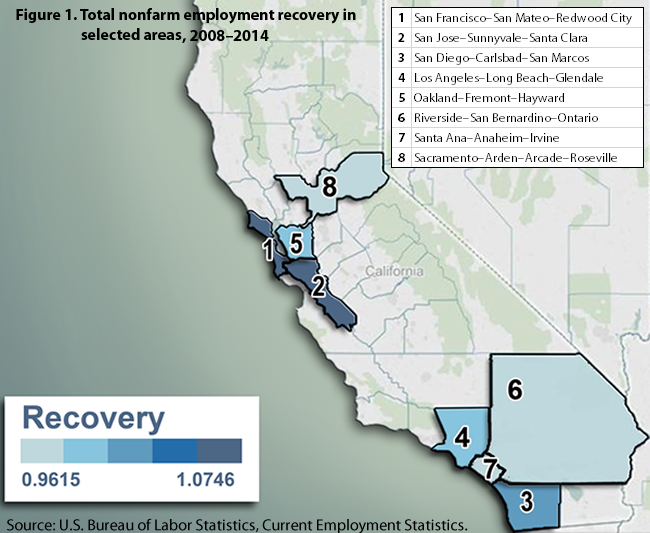 Education and health services represents a large share of employment in all eight areas without significant differences in composition or relative share of total nonfarm. The industry is large and recovering strongly, with few differences across the eight areas.

Having established the relative size of key industries in each area, the next step in the analysis is to calculate recovery ratios at the sector level to see which sectors are driving the total nonfarm recovery.

Across most areas, education and health services was the sector with the highest recovery ratio. Because this sector’s growth, driven by health care and social assistance, was fairly consistent throughout the north and south regions, analysis here does little to explain why one part of the state is outperforming the others. In the four southern areas, leisure and hospitality was the sector that showed the second largest recovery ratios. In the north, information generally showed outsized recovery ratios. The two areas where the Silicon Valley is located, San Francisco—San Mateo—Redwood City Metropolitan Division and San Jose—Sunnyvale—Santa Clara MSA, were the only areas where recovery in the information sector outpaced recovery in education and health services. In addition, the  Sacramento–Arden–Arcade–Roseville MSA showed the second largest recovery ratio in professional and business services (See Table 2.)

Similar to the job recovery for the information sector, recovery ratios for professional and business services are highest in the two northern areas where Silicon Valley is located, and lowest in the southern areas. Professional and business services is the industry in which the effect of the technology sector is most apparent. A deeper look at this particular industry yields interesting results. 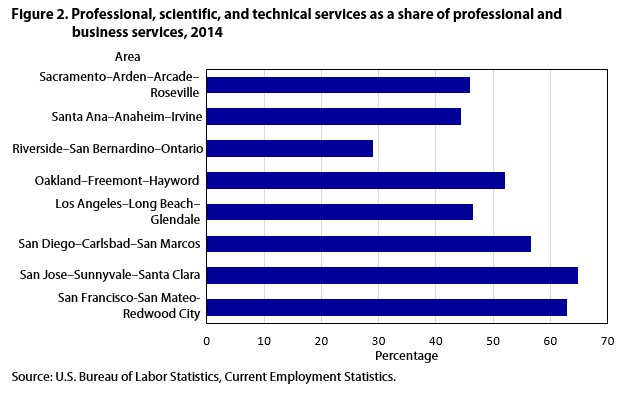 The employment recovery in California has been strongest in those areas most heavily invested in the technology industry. The greatest recovery gains, both in total nonfarm employment and tech-intensive industries, occurred in the Silicon Valley areas, San Francisco-San Mateo-Redwood City Metropolitan Division and San Jose-Sunnyvale-Santa Clara MSA. These two areas had total nonfarm recovery ratios over 1.06 compared with an average of 0.98 across the other six large areas.

An analysis of the data reveals that there exists a strong relationship between employment recovery in the technology related industries and recovery at the total nonfarm level. This highlights the importance of the technology industry in employment recovery from the most recent recession. Because technology related industries are proportionally larger and higher growth in the San Francisco-San Mateo-Redwood City Metropolitan Division and San Jose-Sunnyvale-Santa Clara MSA areas, employment recovery has occurred at a much faster clip in the Silicon Valley areas than it has in the southern areas. This growth has bolstered northern California’s recovery, creating a much higher rate of growth in the northern areas than found in the southern areas

1 Refers to the recession beginning December 2007 and ending June 2009 according to the National Bureau of Economic Research (NBER) “US business cycle expansions and contractions,” http://www.nber.org/cycles.html.

3 The monthly Regional and State Employment and Unemployment release notes the largest and smallest changes in total nonfarm employment for areas with average employment greater than 750,000.

6 CES Metropolitan Statistical Area (MSA) and metropolitan division data are not seasonally adjusted for industries below the total nonfarm employment level. Also note that, since January 2014, data have not been benchmarked and year-over-year comparisons may include some effect of differing seasonality between the benchmarked history and sample based data.

Nicole Havins is an economist at the Office of Employment and Unemployment Statistics, U.S. Bureau of Labor Statistics.

top Back to Top
close or Esc Key
Recommend this page using: