Employment estimates from the Current Employment Statistics (CES) survey are among the first current economic indicators released by the federal government each month.1 The roots of the CES survey go back a century and began with the publication of employment data for four manufacturing industries in 1915. Since then, the survey has grown to cover over 900 industries and include approximately 52,000 employment, hours, and earnings data series. The survey is designed to capture many influences on employment, including cyclical and trend growth, changing seasonal patterns, weather, and strikes. Throughout the history of the CES program, strikes have affected employment estimates, sometimes significantly. For example, two of the largest strikes in CES history caused large changes in wired telecommunications employment in August 2000 and in August 2011.2 (See figure 1.) To accurately interpret employment in CES estimates, users of the data should understand how CES accounts for strikes. Users also should understand why CES cannot precisely quantify the impact of strikes on CES data. 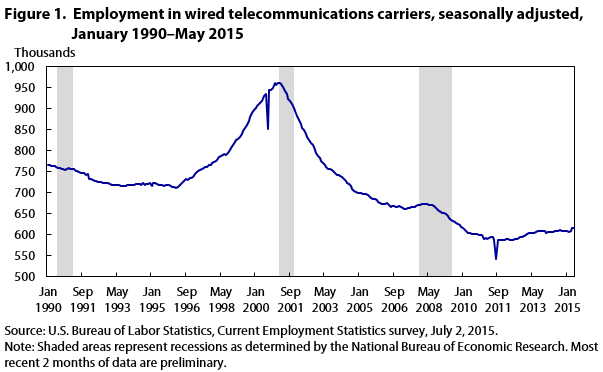 CES prepares a monthly summary of strike activity during the survey reference pay period, which is the pay period that includes the 12th of month. This pay period is specific to each establishment; it may be 1 week or 2 weeks long, or it may be monthly or semimonthly. The CES strike report contains information about workers directly involved in large strikes (1,000 or more workers) who were idle during the entire reference pay period.3 CES gathers information from public sources—such as media reports or publicly available company or union information—and the report itself is prepared and is then released on the U.S. Bureau of Labor Statistics (BLS, the Bureau) website before estimates are compiled. The numbers in the report indicate the possible direct effects of strikes on CES employment estimates for the current month. Thus, the strike report may be useful to people anticipating the upcoming payroll survey data. Also, after the monthly CES estimates are released, analysts attempting to discern underlying economic trends can use the strike report to exclude movements possibly caused by strikes.

The strike report includes information on the number of workers on strike during the current and previous reference periods, new strikes, strikes settled, and the net change. Information is provided on specific strikes and the industries they affect.4

In addition to the strike report, the BLS Work Stoppages program produces a broader measure of strike activity. This program provides monthly and annual data and analysis of work stoppages involving 1,000 workers or more. Like the CES Strike Report data, these data come from public sources. However, a key difference between the two is that work stoppages include all stoppages lasting a full shift or longer, while the CES Strike Report only includes strikes lasting the entirety of the survey reference pay period.5

Neither product, however, allows users to accurately quantify the effects of a strike on CES estimates. Users face many challenges in attempting to measure precise strike effects; the purpose of this article is to detail and explain these challenges.

The CES survey is focused on measuring month-to-month changes in employment, hours, and earnings at nonfarm business establishments. To accomplish this, CES collects payroll data each month from a subset—or sample—of all business establishments. CES asks survey respondents to submit a count of the total number of employees on their establishment’s payroll. This count includes anyone who worked or received pay during the CES survey reference period, which is the pay period—specific to each establishment—that includes the 12th of the month. Thus, people on strike for the entire period are not counted as employed, because they are not on the payroll.

In evaluating a strike in CES estimates, CES considers these questions:

·        Did the strike occupy all, part, or none of the CES survey reference period?

·        Which industry or industries were affected by the strike? 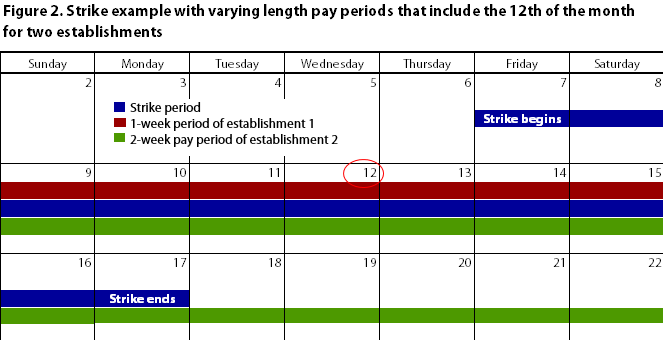 Establishment 1 has a 1-week Sunday-to-Saturday pay period that runs from the 9th to the 15th. This establishment’s workers were on strike for the entire pay period including the 12th. They, therefore, are not considered employed and are excluded from CES employment estimates.

Establishment 2 has a 2-week pay period, which runs from the 9th to the 22nd. In this case, workers were on the payroll after the strike ended. Because they were not on strike for the entire pay period including the 12th of the month, they are considered employed and, therefore, are included in CES employment estimates. 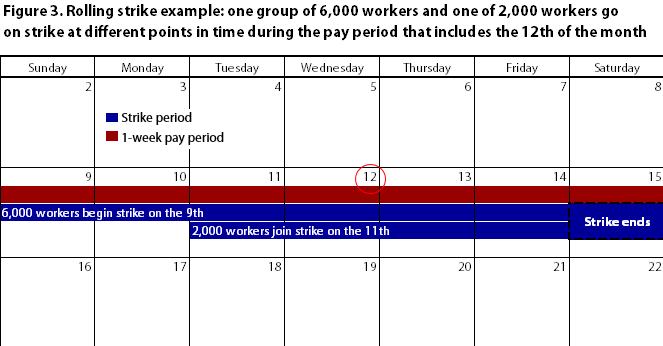 Rolling strikes can complicate determining if a strike should be included in CES estimates or not and can affect the magnitude of the strike effect. A rolling strike occurs when different groups of workers go on strike at different points in time. For example, figure 3 shows a strike of 6,000 workers that begins on the 9th and ends on the 15th of the month. On the 11th, however, 2,000 additional workers joined the strike, increasing the total number of striking workers to 8,000. However, because these additional strikers worked for part of the establishment pay period including the 12th of the month they are, according to CES definitions, considered employed. Therefore, only the initial 6,000 workers are excluded from CES employment estimates.

Industry. Industry classification is based on the North American Industry Classification System (NAICS) 2012.6 A company with numerous establishments, or worksites, may be classified into many industries. For example, an aerospace company that produces navigation equipment for airplanes might be classified into the manufacturing industry “search, detection, and navigation instruments” (CES NAICS-based industry code 31-334511). The same company may also have an establishment that designs computer systems used in aircraft communications, which would be classified in “custom computer programming services” (CES NAICS-based industry code 60-541511), a professional and business services industry. In this way, strikes against a single company can be distributed across several industries, affecting employment in each.

Many strikes are called by unions, which represent occupational groups, classes, or tradespeople. For example, an electrical workers’ union may go on strike against several companies scattered across many industries. This situation complicates evaluating exactly how many workers are striking within each individual industry.

If a particular strike is only partially or not at all represented in the sample, CES will adjust the final estimate to reflect all people in the strike. In this case, the number of workers on strike usually is determined by contacting the strike-affected company or by using a published figure that is consistent across a variety of reputable public sources. This example is also the case for replacement workers; CES must adjust for known replacement workers at establishments that are not represented in the sample.

In addition to the number of strikers, the pay-period timing of nonsample units is another valuable piece of missing information when a strike is partially in the CES sample or not in the sample at all. Because the timing of the pay period is an important determinant of whether and how a strike is included in estimates, CES attempts to get pay-period information for affected companies. The first and best method for obtaining this information is to call the human resources staff of striking companies. If they are unable to provide the necessary information, unions sometimes can provide it. Along with these methods, extensive research is undertaken using news and other media sources.

Another secondary strike effect occurs when competitors of a striking firm add employees to cover additional business foregone by the striking company. For example, a strike at one airline may lead to increased business for their competitors. In extreme cases, this effect may even offset the magnitude of the strike’s primary effect on CES data.

Besides affecting CES employment counts, strikes can also affect estimates of workers’ average weekly hours and average hourly earnings. These are hours for which workers either are paid for work or are on paid leave (which includes vacation, holidays, sick leave, or other leave) for the pay period that includes the 12th of the month.

When strikers work part, but not all, of the reference pay period, the CES survey counts them as employed, but with reduced hours. The magnitude of the reduction on average weekly hours depends on the proportion of workers in the industry’s sample with reduced hours and the number of hours they worked.

When workers are on strike for an entire pay period, CES hours and earnings estimates can be affected by both within-industry effects and by sum-across-industries effects.

Within-industry effects. For the specific industry involved in the strike, estimates are affected only if the hours or earnings of the people on strike or layoff differ considerably from the industry’s average hours or earnings. The impact is phased in slowly over the months the strike continues. Because of confidentiality requirements, CES cannot provide information on the precise impact of a particular strike and related shutdowns on average weekly hours or average hourly earnings for a particular industry. However, the change in the industry estimate will include the impact of the strike, as well as developments that other sample members report.

Data users’ understanding of the treatment of strikes in the CES employment estimates is necessary for a complete analysis of the data. Strikes should be identified and accurately reflected in the CES estimates for a variety of reasons. Depending on its timing compared with the survey reference pay period, a strike can affect data on employment, average weekly hours, and average hourly earnings in various ways. In addition, one should note that the precision with which strike effects can be measured is limited. Limited information, adherence to the strict CES definition of what is or is not included as employed, and secondary effects limit the CES program’s capability to exactly quantify the effects of strikes on CES employment, hours, and earnings.

2 For a listing of historical strikes of more than 1,000 workers occurring during the CES reference period, see https://www.bls.gov/ces/cesstrkhist.htm.

4 Although the numbers in the strike report are useful to analysts, the figures should be used with caution, because they are preliminary and possibly incomplete. The CES strives to ensure the accuracy and completeness of the strike report; however, because the report is based on secondary sources, CES cannot guarantee its accuracy or completeness.

6 CES industry codes can differ from NAICS codes since industries are sometimes combined, primarily because of sample inadequacy issues.

John P. Mullins is an economist in the Office of Employment and Unemployment Statistics, U.S. Bureau of Labor Statistics.