Inflation can be defined as a consistent increase in an economy’s “price level,” or the price component of total expenditures on a set of goods and services, over a given period. The Consumer Price Index (CPI), a product of the Bureau of Labor Statistics (BLS), is perhaps the most widely used measure of inflation in the United States. The CPI measures the average change over time in the prices paid by urban consumers in the United States for a market basket of goods and services.

The Personal Consumption Expenditures (PCE) price index, produced by the U.S. Bureau of Economic Analysis (BEA), is another measure of consumer inflation and is followed closely by the U.S. Board of Governors of the Federal Reserve System (the Federal Reserve). Despite differences in scope, weight, and methodology, the CPI and the PCE price index both measure inflation from the perspective of the consumer. However, one might be interested in an index that measures price change across a broader or narrower range of goods and services—for example, an index that measures price change across a set of goods and services that includes not just consumer goods and services, but also goods and services purchased by businesses, government, and other entities.

One such measure is the price index associated with the nation’s gross domestic product (GDP). Each quarter, BEA releases data on the level of, and change in, GDP. These data include a breakdown of GDP into price and quantity indexes, as well as a GDP implicit price deflator. The GDP price index and implicit price deflator are derived from the measurement of GDP, giving rise to three main issues that distinguish the GDP price indexes from other measures of inflation. The first issue is the scope of goods and services for which prices are collected and indexes are calculated. The second is the weight attached to prices for these goods and services. The third is the methodological details of price index calculation.

The CPI is a measure of the average change over time in the prices paid by urban consumers for a constant-quality market basket of goods and services—that is, a sample of goods and services that consumers purchase for day-to-day living. Produced monthly, the CPI weights the price of each item in the market basket on the basis of the amount of spending reported by a sample of families and individuals.

The CPI has two primary inputs: prices and expenditure weights. Data on prices are collected from the BLS Commodities and Services (C&S) Survey and Housing Survey. The C&S survey collects price data on approximately 80,000 goods and services per month in roughly 23,000 retail establishments in 87 urban areas around the United States. The Housing Survey collects approximately 6,000 rent quotes per month in the same 87 urban areas. Retail establishments for which price data are collected are selected primarily via a sampling process that uses data from the Telephone Point-of-Purchase Survey (TPOPS), administered quarterly by the U.S. Census Bureau on behalf of BLS. Once retail establishments are selected for price collection, field staff employed by BLS visit the establishments, select a unique item for pricing, and continue to collect the price data monthly or bimonthly, unless the item is no longer sold or a different retail establishment is selected in the next TPOPS rotation. Housing units are selected by means of a different survey process, one that relies on data from both the decennial census and the U.S. Census Bureau’s American Community Survey for sampling.

The second primary input into the CPI, the expenditure weights, is based on Consumer Expenditure (CE) survey data collected by the U.S. Census Bureau for BLS. The CE survey identifies the dollar amount households spend on a broad range of goods and services. About 14,000 1-week diaries and 28,000 quarterly interviews are collected from the current CE survey sample each year.

Once price and expenditure data are collected, price indexes can be calculated with the use of price index formulas. The CPI uses a hybrid of geometric and arithmetic mean calculation, depending on whether “lower level” or “upper level” indexes are being constructed. Currently, the CPI measures price change for 211 item categories (e.g., breakfast cereal) in 38 geographic areas (e.g., Boston–Brockton–Nashua), forming 8,018 basic item–area index cells (211 × 38) that serve as the building blocks from which aggregate indexes are constructed. These building blocks are the so-called lower level indexes. Aggregate indexes constructed from them are the so-called upper level indexes. For example, the intermediate upper level index for cereals and cereal products is constructed from three item categories: (1) flour and prepared flour mixes; (2) breakfast cereal; and (3) rice, pasta, and cornmeal. The index for cereals and cereal products can be computed for the Boston–Brockton–Nashua metropolitan area, for a set of cities that make up the Northeast urban geographic area, or for all cities in which prices are collected. The last forms an index at the level of the U.S. city average. In total, the CPI consists of thousands of indexes that measure price change for narrow and broad categories of goods and services across multiple geographic areas. The result is a set of CPI indexes that measure the average change over time in the price paid specifically by urban consumers for a constant-quality market basket of goods and services.

The CPI uses an arithmetic mean (or Laspeyres) formula for all upper level index calculation, but employs a geometric mean for approximately 60 percent of all lower level indexes in terms of weight (a Laspeyres formula is used for the remaining 40 percent). The geometric mean formula allows the CPI to reflect changes in consumer spending patterns among goods and services within item–area combinations—changes that occur in response to changes in relative price. The formula assumes that the change in quantity is equal (in percentage terms), and inversely related, to the change in price. Thus, if the relative price of one brand of bananas in the Boston–Brockton–Nashua metropolitan area increases, then the quantity purchased of that brand is assumed to decrease percentagewise by the same amount. Similarly, if a pint of ice cream increases in (per-unit) price relative to a quart of ice cream, then the quantity purchased of a pint is assumed to decrease by a percentage reflective of the change in relative price.2

Unlike the geometric mean formula, the Laspeyres formula implemented in the CPI is an arithmetic mean of price relatives weighted by expenditures that implicitly contain information on quantity. Because expenditure data are updated every 2 years, the month-to-month changes in upper level CPI indexes reflect price change under the assumption that quantity remains fixed. This assumption means that the CPI does not account for real-time changes that may occur in expenditure shares across aggregate categories of goods and services, perhaps in response to changes in relative price across the same aggregate categories. In short, the Laspeyres formula introduces “consumer substitution bias” into the CPI; that is, it does not account for the possibility that consumers will switch to different products or shop in different outlets in response to increases in the price of close substitutes.

In sum, the CPI is a measure of price change across a set of goods and services purchased by urban consumers and is calculated with the use of a combination of geometric and arithmetic means that can capture some degree of consumer substitution limited to goods and services within item groups.

BEA is responsible for producing the National Income and Product Accounts (NIPAs). According to BEA, “The NIPAs are a set of economic accounts that provide information on the value and composition of output produced in the United States during a given period and on the types and uses of the income generated by that production.”3 The NIPAs are one of the three major components of the U.S. national economic accounts. The others are the industry (input–output) accounts prepared by BEA and the financial (flow-of-funds) accounts prepared by the Federal Reserve.4 Together, the national economic accounts present a macrolevel diagnosis of the health of the U.S. economy and encompass the full scope of economic activity in the nation.

The NIPAs measure, in particular, (1) domestic income and product (i.e., output), (2) private enterprise income, (3) personal income and outlays, (4) government receipts and expenditures, (5) foreign transactions, (6) the domestic capital account, and (7) the foreign transactions capital account. The NIPA domestic income and product account provides expenditure and income summaries of GDP. GDP is one of the most important and closely followed NIPA accounts and measures the market value of final goods and services produced by the U.S. economy over a given period.5 The expenditure and income approaches reflect two of the three ways to calculate GDP: (1) as the sum of goods and services sold to final users (expenditures approach); and (2) as the sum of income payments and other costs incurred in the production of goods and services (income approach). The third approach calculates GDP as the sum of “value added” by all industries in the economy (the production approach).6

Although the GDP price index and the CPI both measure changes in the prices of goods and services purchased by consumers, the GDP relies on the PCE price index as its measure of change in consumer prices. Also, whereas the CPI uses a Laspeyres formula, the PCE price index relies on a Fisher ideal price index calculation.8 In addition, the CPI weights are derived from out-of-pocket expenditures by consumers, while the PCE weights are derived from out-of-pocket expenditures by consumers as well as third-party expenditures on behalf of consumers.9 Finally, the actual goods and services for which prices are collected vary. (For example, the CPI for financial services includes only checking accounts and other bank services, as well as tax return preparation and other accounting fees, and has less than a 0.5-percent share in the CPI, whereas the PCE is more expansive and includes pension funds, regulated investment companies such as mutual funds, and securities commissions).10

The GDP price index is calculated with a Fisher ideal index formula, which is able to pick up changes in the allocation of expenditures by consumers across the broad categories of consumer goods and services covered by GDP. The GDP price index is similar in concept to the chained CPI-U, or CPI for All Urban Consumers.11 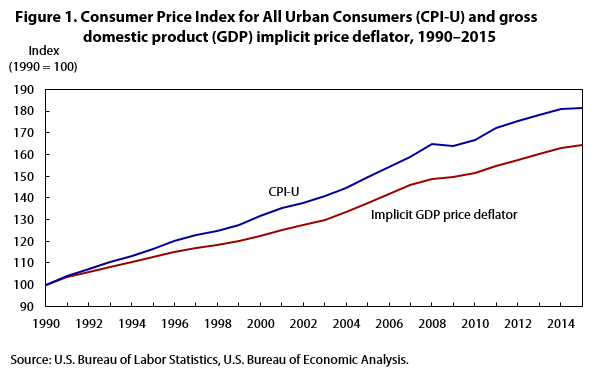 4 The industry accounts “trace the flow of goods and services among industries in the production process” and “show the value added by each industry and the detailed commodity composition of national output,” while “[t]he financial accounts record the acquisition of nonfinancial and financial assets (and the incurrence of liabilities) throughout the U.S. economy, the sources of the funds used to acquire those assets, and the value of assets held and of liabilities owed” (Concepts and methods of the U.S. National Income and Product Accounts, chapters 1–4, p. 1-1).

7 The income approach “is used to examine the purchasing power of households and the financial status of businesses” and reflects a summation of employee compensation, taxes on production and imports, subsidies, net operating surplus (i.e., profits earned by private and government enterprises), and consumption of fixed capital. The production approach “is used to analyze the industrial composition of U.S. output.” See Concepts and methods of the U.S. National Income and Product Accounts, chapters 1–4, pp. 2-7 to 2-10.

9 Third parties are entities that make payments on behalf of consumers, such as health insurance companies when they pay a medical bill to meet their insurance obligation.

12 As stated by BEA, an “implicit price deflator is the ratio of the current-dollar value of a series, such as gross domestic product (GDP), to its corresponding chained-dollar value, multiplied by 100.” (See “What is an implicit price deflator and where can I find the GNP IPD?” in Frequently asked questions (U.S. Bureau of Economic Analysis), https://www.bea.gov/faq/index.cfm?faq_id=513.

Jonathan D. Church is an economist in the Office of Prices and Living Conditions, U.S. Bureau of Labor Statistics.