Injuries from falls to lower levels, 2013

Falls to a lower level accounted for nearly 5 percent of all worker injuries and illnesses requiring days away from work in 2013 and for 13 percent of all fatal work-related injuries. This article compares the numbers of such falls with data from 2011, looks at three industries with a high incidence of falls, distinguishes between fatal and nonfatal falls, and briefly discusses the occupations and demographics of workers who fall to lower levels.

The number of nonfatal falls to a lower level has been mostly unchanged in private industry since 2011 (see table 1), while the number of fatal falls to a lower level for private industry has increased slightly, from 522 in 2011 to 569 in 2013. Most of this change was in the private construction industry, whose fatal falls increased from 255 to 291, or 14.1 percent, from 2011 to 2013. During this period, total hours worked in the private construction industry increased by 5.8 percent.

The Bureau of Labor Statistics (BLS) collects data on occupational injuries and illnesses and on fatal occupational injuries; however, the program is a purely statistical one and has no regulatory functions. The Occupational Safety and Health Administration (OSHA) is responsible for ensuring workplace safety. To support this mandate, OSHA creates safety standards and is responsible for enforcing those standards. In the construction industry, fall protection is required when workers are at heights 6 feet or more above a lower level.1

In some circumstances, such as proximity to dangerous equipment, protection is required at heights less than 6 feet. Some examples of fall protection are guardrails, safety nets, and fall arrest or harness systems.

Data collected by the SOII and CFOI have been coded, beginning with survey year 2011, on the basis of the Occupational Injury and Illness Classification System (OIICS), version 2.01. This classification system is a comprehensive revision of the coding system used from 1992 to 2010. The new system encompasses a break in series, so data from 2011 to 2013 are not directly comparable to data from 1992 to 2010.4

·       Fall from collapsing structure or equipment

·       Fall through surface or existing opening

Each of those categories was further divided by the height of the fall, if known or reported, in 5-foot increments (for example, 6 to 10 feet) up to 30 feet. All falls to a lower level from greater than 30 feet were recorded as “more than 30 feet.” The object or structure the worker fell from (roof, ladder, etc.) was captured not by the event code but by the source code. For falls to a lower level, the source was the equipment or part of the structure (structural element) from or through which the worker fell. In some cases, a secondary source was recorded; this was the object or substance, if any, that contributed to the worker’s fall. In the example of a worker falling from a ladder, the secondary source could be the floor or ground. In 84.8 percent of the nonfatal falls to a lower level in 2013, the secondary source was not specified.

As the height of the fall increases, fatal injuries represent a higher proportion of the total of fatal injuries and days-away-from-work injuries. While this result is hardly surprising, data collected from the SOII and CFOI allow rough comparisons of the risks workers face in situations where falls are a hazard.

It is also difficult to compare event or exposure codes because some cells contain data that are not publishable for the SOII, the CFOI, or both. Falls to a lower level are classified as fall to lower level, unspecified; fall from collapsing structure or equipment; fall through surface; and other fall to lower level. Falls to lower level, unspecified, are cases of falls where not enough information is available to code at a more detailed level. Other falls to lower level, the majority of falls to lower level, include falls other than from a collapsing structure or equipment or through a surface. Some examples are falls from a ladder, roof, scaffold, stairs, or trees. This article focuses on other falls to lower level (code 433) because 76.7 percent of the injuries and 78.2 percent of the fatal injuries are within in that group. For both the SOII and the CFOI, the article focuses on falls in the private sector, and, for the CFOI, it excludes self-employed workers. This approach brings the scope of workers covered by the CFOI and SOII closer but still not equal, as the SOII excludes workers on small farms. The agriculture industry, however, represents a small portion of the fatal-falls-to-lower-level total. Of the 322 falls coded as “other fall to lower level” among wage and salary workers, only 1.2 percent were in the animal production or crop production industries.

Within the subset of “other falls to lower level” among wage and salary workers in private industry, the height of the fall is specified in most (87.3 percent) of the fatal injury cases. For injuries with days away from work, the height is specified in about half (49.4 percent) of the cases. The CFOI collects information from multiple sources, including death certificates, workers’ compensation reports, and other reports provided by state administrative agencies. On average, the CFOI collects four documents from different sources for each fatal injury, while the SOII relies only on the information provided by the survey respondent to code cases. The additional information may explain why fatal fall injuries are more often coded at a higher level of detail.

The SOII collects data annually from a random sample of employers. For cases with days away from work, more detail is available, including worker demographics, temporal characteristics, and descriptions of the cases and how they occurred. This article describes injuries requiring days away from work because of falls to a lower level. The term “fall injuries” could also include injuries that require job transfer or restriction and injuries that are recordable but do not involve lost work time, as well as injuries resulting from a fall on the same level. The article focuses only on injuries resulting from falls to a lower level and requiring days away from work, and will refer to these as “fall injuries” in the interest of brevity. 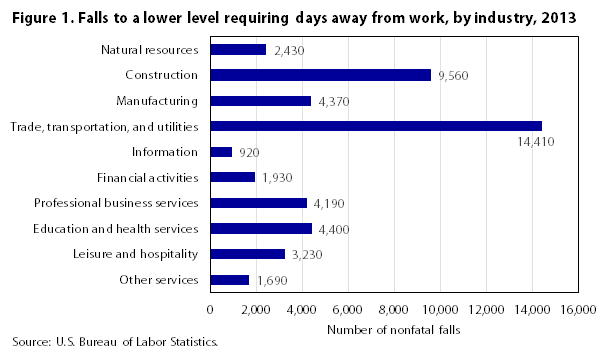 Most of the fall injuries occurred in private industry (82.6 percent). The construction industry accounted for 20.3 percent of these injuries. Other industry sectors with large shares of fall injuries were retail trade (12.3 percent), transportation and warehousing (10.4 percent), manufacturing (9.3 percent), and health care and social assistance (8.3 percent). Figure 1 shows the number of falls to a lower level that required days away from work, by industry, for 2013.

In the fruit and tree nut farming industry, among workers injured by falls to a lower level and requiring days away from work,

·       in 53.4 percent of the cases, the source of injury was “trucks—motorized freight hauling and utility”; in 29.5 percent, the source was “floors–walkways–ground surfaces”; and

·       in 27.1 percent of the cases, “soreness, pain, hurt—nonspecified” was the nature of the injury. Other frequent natures of injury were sprains, strains, and tears (25.0 percent) and fractures (19.5 percent). 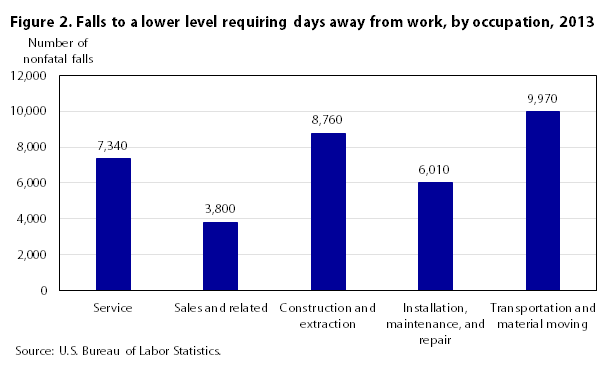 Among all private industry fall injuries, in 26.4 percent of the cases the injuries were sprains, strains, and tears, 24.6 percent were fractures, and in 18.7 percent of the cases the nature of the injury was soreness or pain. Approximately three-quarters (76.7 percent) of the falls to a lower level were categorized as event code 433, “other fall to lower level”; 10.2 percent were “fall from collapsing structure or equipment”; and 9.4 percent were “fall to lower level, unspecified.” Within “other fall to lower level,” when the height of the fall was unspecified or less than 6 feet, there were more sprains, strains, and tears than fractures. From a fall height of 6 to 10 feet and fall height of 11 to 15 feet, there were approximately 5 times as many fractures as sprains, strains, and tears. There are relatively few nonfatal injuries from falls over 15 feet. Much of the data for these categories are not publishable.

The CFOI compiles yearly counts of all fatal work-related injuries in the United States. The scope of the CFOI includes wage and salary workers in private industry, self-employed workers, and government workers at the federal, state, and local levels. The CFOI publishes counts of fatal work injuries at the national level; for each state; for the District of Columbia, Guam, Puerto Rico, and the Virgin Islands; and for many metropolitan statistical areas. Each year, the CFOI publishes a preliminary count of work-related fatal injuries and, later, a revised and final total. Data for 2013 used in this article are revised and final.

In 2013, 595 workers died as a result of falls to a lower level. The vast majority (95.6 percent) were employed in private industry. Self-employed workers accounted for 26.4 percent of the total, a percentage that was higher than their percentage of all fatal work injuries (20.7 percent). The overwhelming majority (98.2 percent) were men. More than half of these workers were non-Hispanic White (63.7 percent), while 27.4 percent were Hispanic. Among all workers who succumbed to a fatal occupational injury, 17.8 percent were Hispanic. 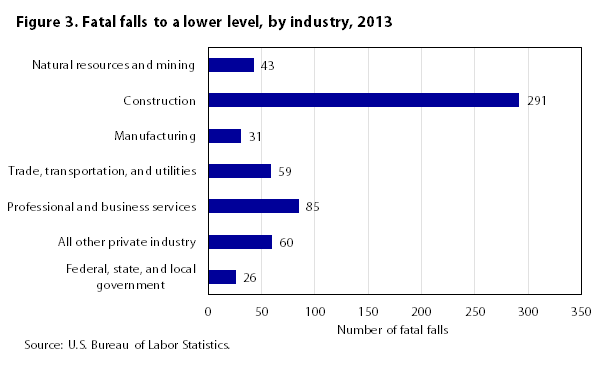 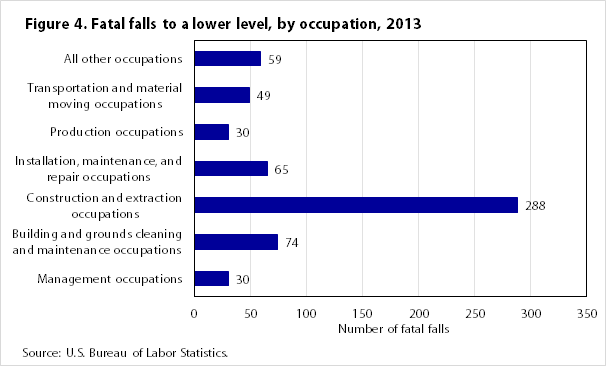 2 Data on nonfatal injuries and illnesses are from the Survey of Occupational Injuries and Illnesses (SOII) program, which collects data from a sample of business establishments in the United States; see “Injuries, illnesses, and fatalities” (U.S. Bureau of Labor Statistics), https://www.bls.gov/iif/home.htm.

4 From 1992 to 2010, the OIICS divided falls to lower level into several subcategories that describe what the worker fell from—for example, fall from ladder or fall from roof. If, for example, a worker fell 10 feet from a ladder onto the floor, in the 1992–2010 coding system the event would be “fall from ladder” and the primary source would be the ground. The height of the fall was not captured. In the coding system used since 2011, the event would be “other fall to lower level 6 to 10 feet” and the primary source would be the ladder. For the classification system used from 1992 to 2010, see Occupational Injury and Illness Classification manual (U.S. Bureau of Labor Statistics, September 2007), https://www.bls.gov/iif/oiics_manual_2007.pdf.

Sean M. Smith is an economist in the Office of Compensation and Working Conditions, U.S. Bureau of Labor Statistics.

A look at violence in the workplace against psychiatric aides and psychiatric technicians, Monthly Labor Review, March 2015.