The Occupational Employment Statistics (OES) survey of the U.S. Bureau of Labor Statistics (BLS) is a large survey of employers in the United States. The data from this survey are used to produce estimates of employment and wages by occupation at industry, state, and metropolitan area levels. They are used by the Office of Foreign Labor Certification of the U.S. Department of Labor in setting pay rates for workers in the United States on certain work visas. They are also key inputs to the Employment Projections program, which is one of the most widely used products at BLS. However, the OES data are little known by most researchers.

While the published estimates of the OES program are not designed for making comparisons over time, the confidential microdata underlying these estimates do allow for following certain employers over time, and these data have several features that make them particularly useful for research purposes. Most notably, the microdata are a very large set of data containing full staffing patterns, including occupation and wage information for all employees within surveyed establishments.

BLS began conducting surveys of employment by occupation in the 1960s.1 It was in 1971 that the Occupational Employment Statistics survey began, and it was a collaboration between BLS and 10 State Employment Security agencies. The OES initially was a survey of 50,000 manufacturing establishments, asking these establishments about the distribution of their employees by occupation. Similar surveys were soon developed for other industries. Beginning in 1977, surveys were conducted in every state and the District of Columbia. Since then, major changes to the design of the OES survey have included the following:3

The OES sample design is a complex stratified random sample, which differs in several ways from a simple random sample of employers. The goal of the sample design is to produce estimates of employment and wages for each occupation with as little sampling variability as possible given the overall sample size. Portions of the sample are allocated to each industry, each geographic region, and (before 2005) each employer size class to reduce the variation of estimates of employment and wages by occupation for detailed industries and detailed geographic areas. Since 2006, the occupational variability of industries has also been a factor in the sample design—to increase the precision of the estimates, the sample size is larger in industries with more variation in the composition of occupations, and these industries are more likely to be selected for the OES sample.

The large number of employers in the OES sample and the stratified design of the sample mean that hundreds of thousands of employers have been included in the OES sample multiple times, albeit usually at least 3 years apart. This feature allows researchers with access to the OES microdata the opportunity to study changes in the occupational employment and wage patterns of the repeatedly sampled employers.

Repeated sampling in the OES survey

We examine how differences in the OES cross-sectional sampling probabilities across establishment sizes, geographic area types, and industries translate into differences in the probability that establishments with different characteristics appear in longitudinal OES data. For our analyses, we begin with private sector data from 1999, as these data are comparable to later data in their industry and occupational coding systems. (We drop 4,238 establishments from our analyses because they were not used for the 2002 estimates and so their industries were not recoded using the NAICS.) We omit the large number of public sector establishments included in the OES survey (such as publicly owned schools and hospitals), as well as establishments sampled in Guam, Puerto Rico, and the Virgin Islands. The frame for this sample is the Quarterly Census of Employment and Wages (QCEW), assembled from the reports to the unemployment insurance system made by nonfarm establishments in every state, and supplemented with a list of rail transportation employers (not covered by the unemployment insurance system).8 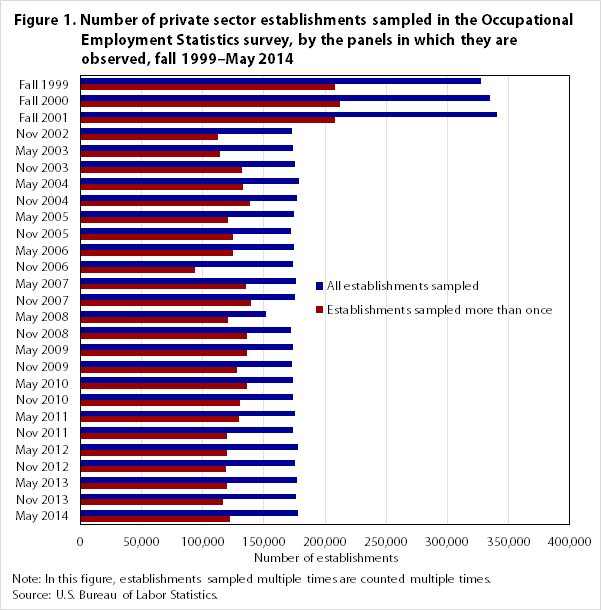 Figure 1 shows the number of establishments sampled by the OES program and those sampled more than once, by the panels in which they are sampled. This figure shows that establishments sampled more than once for the OES program come from all waves of data collection. It also shows the clear drop in sample size per panel in 2002, when the sample collection was split from one panel each fall to two panels, in May and November, of each year. Otherwise, the distribution of the potential sample for longitudinal observations of the OES data is remarkably similar from panel to panel, aside from an unusually small overall sample size in May 2008 because of budget constraints10 and an unusually small number of the establishments sampled multiple times that were sampled in November 2006.11

Nonresponse in the OES survey

The composition of longitudinal data from the OES survey is affected not only by the sample design but also by differential response rates to the OES survey. The OES survey is primarily conducted by mail, in a collaboration between BLS and State Workforce Agencies. There is an open-ended form to collect data from small employers, and, until November 2015, there were 97 different industry-specific forms used for collecting occupational employment and wage data from medium- and large-sized employers. After the initial mailing of forms, three industry-specific followup mailings are sent to nonrespondents at intervals of 3–4 weeks. The State Workforce Agencies also conduct followup by telephone, with timing varying by state.12 These agencies collect some data for large establishments via personal visits. Large numbers of respondents choose to respond to the survey in electronic format. 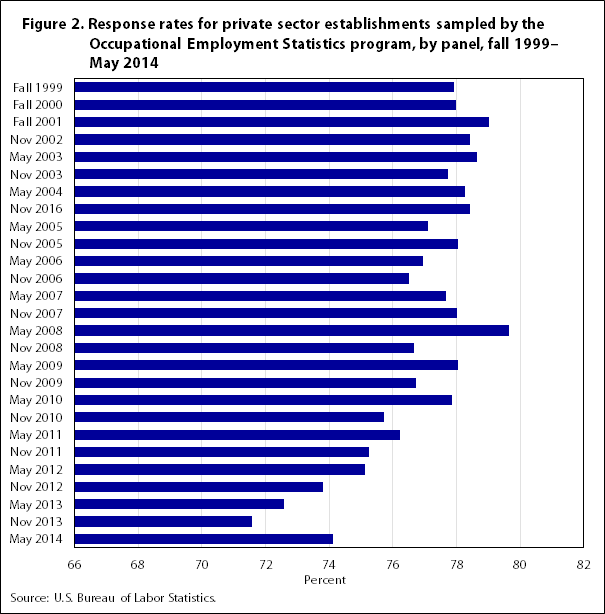 Figure 2 shows response rates for private sector establishments sampled by the OES program were steady at about 77 percent from 1999 through 2010 or 2011. There was a noticeable decline in response rates in 2013 because of the federal government shutdown in October 2013.13 State Workforce Agencies are required to follow up with employers (except when funding for this work lapses in a federal government shutdown) until the overall response rate for the survey reaches at least 75 percent overall (including the establishments of state and local governments) and 75 percent in each MSA. Data are collected from state governments only in the November panels, and so state analysts do not need to follow up with as many private sector establishments to reach these response targets in the November panels as in other months. Response to the OES survey has been mandatory in North Carolina since 1995, Oklahoma since 2000, South Carolina during the 2002–05 period, Georgia since 2005, Vermont since November 2012, Wyoming since May 2013, the District of Columbia since November 2014, and Hawaii and Oregon since May 2015. Private sector response rates are about 85 percent in these states when response is mandatory.14

Table 6 shows that rural areas (BOS areas) have higher response rates than urban areas (MSAs), and among urban areas, response rates are higher in smaller MSAs than in larger MSAs. Phipps and Jones report that establishments in larger MSAs are both less likely to respond by mail to the survey forms and more difficult for state analysts to reach by telephone; these establishments often state that they are too busy to respond to the OES survey.16 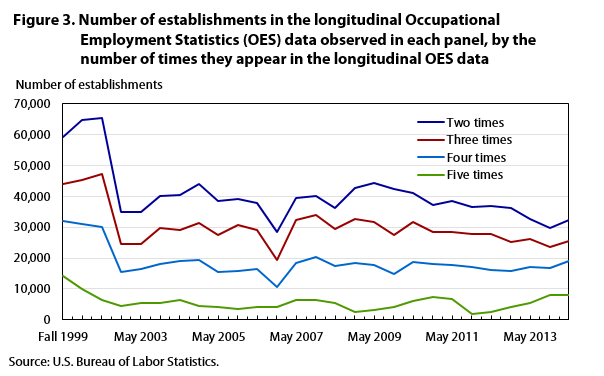 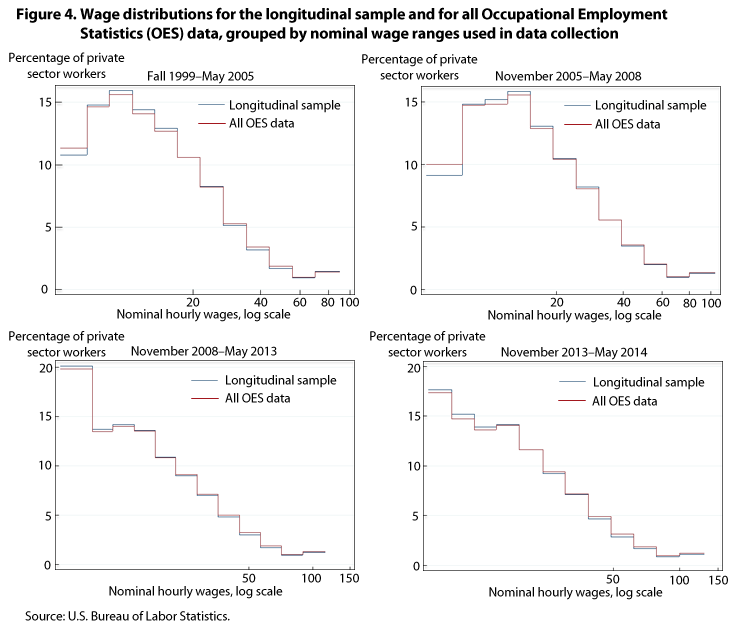 The OES program collects information on wages from each establishment surveyed. Employers are asked to report the number of employees in each occupation by wage range; employers select among 12 wage ranges. These wage ranges were constant from 1999 through May 2005 and were then adjusted in November 2005, November 2008, and November 2013.22 Figure 4 shows nominal wage distributions for private sector establishments in the longitudinal sample compared with wage distributions from all private sector establishments in the OES survey (including those with imputed wage data), in groups of panels with common wage ranges. For example, wage data for all panels from fall 1999 through May 2005 are combined in the upper left wage density plot, including multiple observations from establishments in the longitudinal sample if they responded more than once during this period.

Thus, it is possible to use data collected from the OES to examine employment and wage patterns for establishments observed longitudinally—not only for the largest establishments that are most likely to be selected for this survey but for a broad range of establishment types.

Longitudinal data from the Occupational Employer Statistics Survey are not publicly available. However, the BLS onsite Visiting Researcher program allows eligible researchers the opportunity to visit BLS as temporary special employees for the purpose of working with confidential data in approved statistical research projects.26 Under a grant from the National Science Foundation, BLS and the American Statistical Association offer research fellowships for this type of research by academic scholars.27 Funding opportunities for junior faculty and senior graduate students to engage in such research include the CSWEP Summer Economics Fellows Program.28

9 In the analyses of sampling and response rates, we include 108,550 establishments, largely from the 1999 and 2000 OES panels, which cannot be linked uniquely to the QCEW data; therefore, we cannot determine if there is any longitudinal link to establishments sampled in the OES data in other panels.

10 The May 2008 sample was reduced from the usual 200,000 establishments overall (including state and local government and establishments in Guam, Puerto Rico, and the Virgin Islands) to approximately 174,000 establishments overall because of budget constraints, as described on page 7 of Occupational employment and wages, 2008, USDL-09-0457 (U.S. Department of Labor, May 1, 2009, reissued May 29, 2009), https://www.bls.gov/news.release/archives/ocwage_05012009.pdf.

11 The sample for the November 2006 panel was accidentally drawn without using the permanent random numbers on the sample frame.

14 Phipps and Jones, “Factors affecting response.” Note that some employers go out of business in the year between the sample date and the survey date.

21 There were changes to the Standard Occupational Classification (SOC) system in 2010 that affect occupational categories. For this table, we use occupational groupings that are consistent over time, but differ slightly from the 2010 SOC categories.

26 More information about the Visiting Researcher program is available at https://www.bls.gov/rda/home.htm.

27 More information about the ASA/NSF/BLS Research Fellow Program is available at https://www.bls.gov/osmr/asa_nsf_bls_fellowship_info.htm.

28 For a description of the CSWEP Summer Economics Fellows Program, see https://www.aeaweb.org/about-aea/committees/summer-fellows-program.