Suicide in the workplace

Suicide in the workplace is a growing concern. According to the U.S. Bureau of Labor Statistics (BLS) Census of Fatal Occupational Injuries (CFOI), 282 workplace suicides occurred in 2013, the highest number recorded since the CFOI series began in 1992.

The rise in workplace suicides is consistent with the rise in the overall number of suicides in the United States. The Centers for Disease Control and Prevention (CDC) reported that there were 41,149 total suicides in the United States in 2013, compared with 29,199 in 1999—an increase of about 41 percent. During this 15-year period, the number of suicides increased every year but one (2003). According to the CDC, the suicide rate was 10.48 (per 100,000) in 1999, dipped to 10.44 in 2000, and rose to 12.55 by 2013.2 Suicide was the tenth leading cause of all deaths in the United States in 2013, and occurred more than twice as frequently as homicide.3 However, suicides were less likely to occur at the workplace than homicides. Although workplace homicides have declined over time, they occurred about 43 percent more frequently than workplace suicides in 2013. 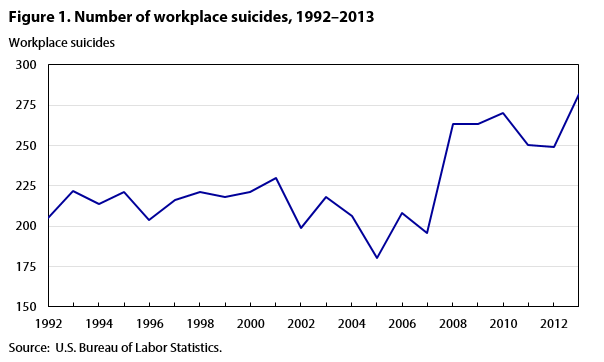 Workplace suicides are unique among workplace fatalities because, unlike other workplace fatalities, they occur intentionally and are often prompted by a variety of causal factors and circumstances that are not always easy to determine. Information about individual suicide cases is sometimes sparse, making it difficult for the CFOI to identify and classify such cases. Determining whether suicides are workplace related can be difficult as well. For example, suicides by employees who work from home may be particularly challenging to classify. If the suicide occurred in the home office, the motive may be entirely unrelated to work. If the suicide occurred somewhere in the home, but outside of the home office, there may be evidence that the suicide was related to business conditions or work.

For a workplace suicide to be included in the CFOI, at least one of the following criteria must be met: (1) the death arose from an injury at the decedent’s work premises while the decedent was there for work; (2) the death occurred away from the work premises, but the decedent was engaged in work activity (e.g., performing work at a client’s premises); or (3) the death was related to the decedent’s work status (e.g., a suicide at home that can be definitively linked back to work). Note that unintentional drug overdoses are not counted as suicides, but they are counted as another type of workplace fatality if they meet CFOI work relationship criteria. The CFOI applies a uniform set of rules to determine whether a fatality is to be considered a workplace fatality.4

CFOI annual counts of workplace suicides are available from 1992 to 2013 and are used for the trend analysis in this article. The detailed analysis of the current risks of workplace suicide is based on data from 2011 through 2013, because 2011 marks the first year that CFOI data were classified in accordance with the Occupational Injury and Illness Classification System (OIICS), version 2.01; the OIICS version 2.01 data are generally not comparable with data from the original OIICS.5

CFOI also publishes fatal injury rates by demographic and case-characteristic categories. Expressed as a count per 100,000 full-time equivalent workers, based on Current Population Survey (CPS) estimates of hours worked,6 these rates are useful for understanding whether the workplace fatality count for a particular group is relatively high or low. For example, 20 work-related suicides for an occupation with more than 1,000,000 workers would be evaluated differently than the same number of suicides for an occupation with fewer than 10,000 workers. The absolute count of fatal work injuries is the same for both groups, but the corresponding relative incidence rates for the two are very different.

Propensity ratios can shed light on differences in the composition or distribution of types of cases for groups sorted by demographic and case-characteristic categories. For example, suppose that from 2011 to 2013, 20 workplace suicides were committed by workers in an occupation that had 100 total workplace fatalities. This would mean that, during a period where only about 6 percent of all workplace fatalities were suicides, 20 percent of the workplace fatalities for this particular occupation were suicides. The distributional share of suicides suffered may be of greater interest to researchers than the absolute count or incidence rate.

Because a propensity ratio is a straightforward calculation of CFOI counts, it is a convenient tool for analyzing hazards and making comparisons among groups. It does not replace the robust measures of fatal injury rates or relative risk ratios, but is a complementary tool that can lead to additional insights or fill gaps when other analytical tools are not suitable. For example, because hours-worked data related to military occupations are not available from the CPS, fatal injury rates for military occupations and relative risk ratios that require those rates cannot be calculated. But with propensity ratios, it is possible to make limited comparisons of military occupations with other major occupational groups.

Equation (1) can be rewritten in the following form, which adds an intuitive interpretation to the propensity ratio:

Generally, the risk of suffering a workplace fatality increases with age. From 2011 to 2013, CFOI fatal injury rates tended to increase with each successive age group. The lone exception is the 18–19 age group; in 2013, the fatal injury rate for this group was higher than that for the next two age groups (20–24 and 25–34).7 But the propensity for workplace suicide has not followed this same pattern.

Counts and propensity by race or ethnic origin and birthplace

Consistent with CFOI data, other analyses suggest higher risk of suicide, in general, for military members and veterans. According to the Surgeon General’s 2012 National Strategy for Suicide Prevention: Goals and Objectives for Action, active-duty servicemembers and veterans are at higher risk for suicidal behaviors than civilians.9 Analyzing CDC data, an article by the Center for Public Integrity asserts that veterans, which represent only 10 percent of the adult population, commit 18 to 20 percent of all suicides.10 Similarly, a Department of Veterans Affairs study of death certificate data from 21 states estimated that veterans committed 22.2 percent of all suicides in those states.11 Experiences during war, war-related afflictions (such as post-traumatic stress disorder), and other factors related to military service may increase the risk of suicide. Although the CFOI includes the resident military in its data, it does not track whether a decedent was a military veteran. Because a workplace suicide may be related to prior military service, military veteran status might be an insightful data element to collect in future iterations of CFOI.

The private industries with the most workplace suicides were retail trade; other services, except public administration; and manufacturing. However, these industries were not the ones with the highest suicide propensity ratios. Finance and insurance had the highest propensity for workplace suicide, with a propensity ratio of 3.42; followed by professional, scientific, and technical services, with 2.86; then health care and social assistance, with 2.18. Other services, except public administration—the private industry with the second highest number of suicides—had the fourth-highest propensity ratio, 2.13. 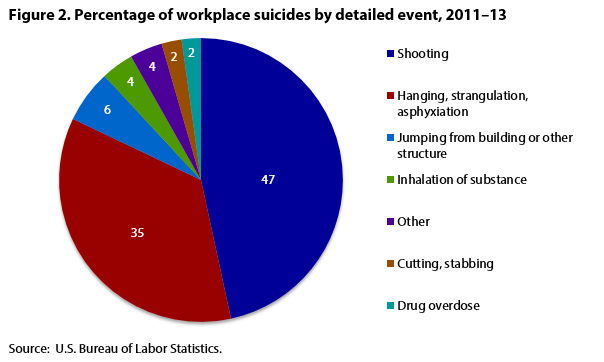 The CFOI “event” category describes how a fatality occurred. Beginning with workplace fatality data for 2011, CFOI case characteristics are classified using OIICS, version 2.01, which offers more detailed classifications of methods of suicide. From 2011 to 2013, 364 (47 percent) workplace suicides were shootings. Of these, 219 involved pistols or revolvers, 59 involved rifles or shotguns, and 86 involved firearms of an unknown type. Thirty-five percent of workplace suicides involved hanging, strangulation, or asphyxiation. (See figure 2.) Twenty-one of the 781 workplace suicides that occurred from 2011 to 2013 were linked to other workplace fatalities. Linked cases in CFOI are those with more than one fatality in the same incident. The most common of these cases were murder-suicides, events involving murder followed by the perpetrator committing suicide. The propensity for workplace suicides that are linked to other cases was 0.34. Note that for military occupations, about 59 percent of the suicides were shootings.

Suicide is a relatively small, but growing, occupational concern. From 2007 to 2009, a period that included the Great Recession,13 fatal work injuries declined rapidly, yet workplace suicides increased and have remained elevated. Unlike many other occupational fatalities, workplace suicides affect a broad mix of occupations, industries, and other worker characteristics. Propensity is a useful tool to identify groups where disproportionately larger shares of fatal work injuries involved suicides when compared with other segments of the labor force.

Workers in the public sector had a higher propensity for workplace suicide while workers in the private sector suffered the majority of these fatalities. The private industry sectors with the highest propensities for workplace suicide were finance and insurance; professional, scientific and technical services; and health care and social assistance.

Military occupations had the third-highest propensity for workplace suicide among major occupational groups. Other studies indicate that military members and veterans have a heightened risk for suicide. Because veteran status may be related to a higher risk of suicide, it might be useful for the CFOI program to collect veteran-status data in the future to determine whether veteran status is, in fact, related to higher risk of workplace suicide. Death certificates in many states include the field “ever served in the armed forces,” an identifier of veteran status on a source document already obtained for most CFOI cases.

Resources are available to help organizations and individuals identify and mitigate the risks of suicide. Some of these resources are listed in the Appendix below.

ACKNOWLEDGMENTS: The author thanks Stephen Pegula for his assistance and encouragement, for his previous related work (see note 1), and for suggesting the name “propensity ratio.” The author also thanks Andrew Kato for his editorial contributions and support.

Reginald Harris is an economist in the Branch of Occupational Safety and Health Statistics, Office of Field Operations, Atlanta Regional Office, U.S. Bureau of Labor Statistics.