Hospital workers: an assessment of occupational injuries and illnesses

In terms of employment, the health care and social assistance sector is one of the largest service-providing sectors in the U.S. economy.1 It is projected to be the fastest growing sector through 2024, with healthcare occupations expected to add more jobs than any other occupational group.2 In addition to playing a significant role in national employment, the health care sector plays a vital role in promoting public health. Its services include treating illnesses and injuries, maintaining wellness, and managing disease.3 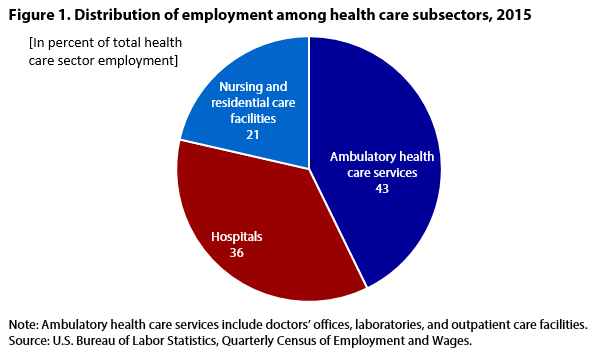 Because of the physical nature of many hospital jobs, private industry hospital employees face a higher incidence of injury and illness—6.0 cases per 100 full-time workers—than employees working in other industries traditionally considered dangerous, such as manufacturing and construction.6 In addition, the injuries of hospital workers tend to carry substantial financial costs. An Occupational Safety and Health Administration (OSHA) report using data on worker compensation claims from the Aon barometer survey estimated that the average loss per claim settled for hospital workers’ injuries in 2011 was $15,860.7 Other studies cited in the report also point to high financial and societal costs associated with replacing nurses who leave the profession because of workplace injuries or illnesses.

This article analyzes injury and illness counts and incidence rates among workers employed in different types of hospitals.8 It also sheds light on the kinds of workplace injuries and illnesses incurred by hospital employees.

All nonfatal occupational injury and illness data presented in this article come from the Survey of Occupational Injuries and Illnesses (SOII), which is conducted by the U.S. Bureau of Labor Statistics (BLS).9 Data from the BLS Census of Fatal Occupational Injuries (CFOI), which provides a complete count of fatal occupational injuries, are also referenced in the analysis.10 Because hospitals in the SOII are commonly grouped by “ownership” (private industry, state government, and local government), the article compares the injury and illness experiences of workers employed in hospitals of different ownerships. Analysis is also provided for hospitals classified under different North American Industry Classification System (NAICS) categories within each ownership.

The SOII is a federal–state cooperative program administered by BLS in cooperation with state agencies. Employers report, on an annual basis, injury and illness data for approximately 230,000 establishments in private industry and state and local government.11 Definitions of recordable injury and illness cases for the SOII conform to guidelines set by OSHA.12 The SOII also collects details of case circumstances and worker demographics for cases that result in days away from work and, for selected industries, for cases involving days of job transfer or restriction.13

The Occupational Injury and Illness Classification System (OIICS), developed by BLS, provides a standardized coding system for characterizing the case circumstances of both nonfatal work-related injuries and illnesses from the SOII and fatal workplace injuries from the CFOI.14 The OIICS uses the following characteristics to describe an occupational injury or illness case: the “nature,” or type, of injury or illness; “event or exposure”; “part of body affected”; and “source or secondary source,” such as machinery, equipment, or other factors that precipitated the event or exposure.

Data used to measure the number of hospital establishments are from the BLS Quarterly Census of Employment and Wages (QCEW) program, which publishes a quarterly count of employment and wages reported by employers.15 The QCEW covers 98 percent of U.S. jobs, providing data, by industry, at the county, Metropolitan Statistical Area, and state and national levels.16

Incidence rates of nonfatal workplace injuries and illnesses vary significantly by type of hospital. Hospitals are classified according to the NAICS and fall under the NAICS 622 subsector, which is further broken down into general medical and surgical hospitals (NAICS 6221), psychiatric and substance abuse hospitals (NAICS 6222), and specialty (except psychiatric and substance abuse) hospitals (NAICS 6223).17 All three types of hospitals provide diagnostic and medical treatment, are equipped for inpatient care (maintaining beds and providing food services to patients), and offer additional services (such as outpatient services, clinical laboratory services, and diagnostic X-ray services). All hospital establishments maintain a staff of physicians and other medical care providers.

The different types of hospitals vary by the services they offer. General medical and surgical hospitals offer the most diverse operating room services for a variety of procedures, while psychiatric and substance abuse hospitals offer mental health services in areas such as psychiatry, psychology, and social work. Specialty hospitals are distinctive in that they typically provide diagnostic and medical treatment to patients with a specific type of disease or medical condition (excluding psychiatric and substance abuse conditions). They also may provide long-term care for the chronically ill and rehabilitation, restorative, and adjustive services to physically challenged people or people with disabilities. Specific services offered in these areas include physical therapy, educational and vocational services, and psychological and social work services. 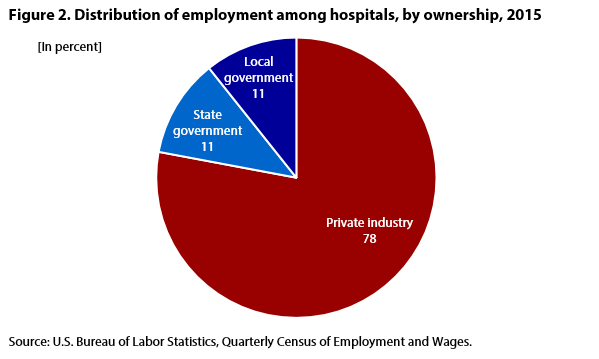 Although the SOII does not provide injury and illness rates for different NAICS categories of state government and local government hospitals, the prevalence of certain types of hospitals in each ownership category may contribute to the rate differentials observed in figure 3. Staff of private and local government medical and surgical hospitals often face hazardous physical tasks involving lifting and moving patients. Similar tasks may be common in hospitals across all ownerships; however, psychiatric and substance abuse hospitals, which are more prevalent among state-run facilities, lend themselves to higher employee injury and illness rates, because psychiatric technicians and aides care for patients whose illnesses may lead to disoriented, uncooperative, or violent behaviors.19

Types of nonfatal injuries and illnesses

Examining data on case circumstances and worker characteristics for SOII cases resulting in days away from work provides a more detailed insight into the injuries and illnesses suffered by hospital workers. The OIICS manual identifies case circumstances in terms of an incident’s “event or exposure,” defined as “the manner in which the injury or illness was produced or inflicted by the source of injury or illness.”25 In that definition, the term “source” refers to “the objects, substances, equipment, and other factors that were responsible for the injury or illness.”26

Among state-run hospitals, which are predominantly psychiatric and substance abuse hospitals, the most common event leading to injuries in 2015 was violence and other injuries by persons or animals (4,590 cases). This event includes all intentional injuries; injuries involving weapons, regardless whether intentional or unintentional; and injuries involving direct physical contact with persons, animals, or insects, regardless of intent. Over half of these injuries (3,050 cases) were subclassified as “intentional injuries by other person.” The second most common event leading to injuries in state government hospitals in 2015 was overexertion and bodily reaction (2,610 cases), which was the most common event for hospitals of other ownerships. The distinctive event distribution of state-run hospitals may be due to the high concentration of psychiatric and substance abuse establishments in this ownership group. As noted previously, workers in psychiatric hospitals are more likely to suffer injuries caused by the violence of others.

The most common source of nonfatal injury or illness resulting in days away from work among all three hospital ownerships in 2015 was a “person other than injured or ill worker.” (See table 1.) This source accounted for 57 percent, 35 percent, and 34 percent of cases in state government, local government, and private industry hospitals, respectively. In the majority of cases, the source was further identified as “healthcare patients.” Thus, many injuries were sustained during physical interactions such as lifting and moving patients.

Injury and illness similarities among hospitals of different ownerships were also observed with respect to the part of body affected, defined by the OIICS as “the part of the body directly affected by the previously identified nature of injury or illness.”27 (See table 2.) These similarities were particularly pronounced between local government and private industry hospitals. In 2015, injuries to the trunk were common across all hospital ownerships, with back injuries representing the majority of cases. Many injuries also occurred to upper extremities, such as hands and shoulders, and lower extremities, such as legs, feet, and ankles.

Compared with nonfatal injuries, fatal workplace injuries are relatively rare, because the types of injuries and illnesses commonly occurring in hospitals (see earlier discussion) generally do not result in fatal outcomes. In 2015, there were 24 fatal work-related injuries in hospitals, 21 of which occurred in private hospitals and 3 in government hospitals.28 Only five fatal cases resulted from violence and other injuries by persons or animals, an event responsible for a large number of nonfatal cases.29 Other events or exposures leading to fatal workplace injuries in 2015 included transportation incidents (nine injuries); falls, slips, and trips (seven injuries); and exposure to harmful substances or environments (three injuries).30

This article highlights the high prevalence of injuries and illnesses among hospital workers. It also examines how the characteristics and circumstances of those injuries and illnesses vary across hospitals of different service and ownership types. The analysis provides illustrative examples of the data available for studying workplace safety in hospitals.

Researching hospital injury and illness incidence rates presents various challenges. Currently, the SOII does not provide aggregate measures of injuries and illnesses for all three hospital ownerships. In addition, the services offered by different types of hospitals may be “intermixed.” For example, psychiatric services might sometimes be included as a subunit in a general medical and surgical hospital; in such cases, injury and illness statistics specific to that subunit would not be differentiated from those for the entire establishment. Lastly, injury and illness rates for contracted hospital workers (e.g., visiting doctors or emergency medical technicians) may not be included in hospital incident reports, because such workers generally report their injuries to their employer (a contractor) rather than the hospital in which the injury was incurred.

10 “Census of Fatal Occupational Injuries (CFOI),” Injuries, Illnesses, and Fatalities (U.S. Bureau of Labor Statistics), https://www.bls.gov/iif/oshfat1.htm. The scope of the CFOI differs from that of the SOII. For further information on methodology and scope, see Handbook of methods (U.S. Bureau of Labor Statistics), chapter 9, “Occupational safety and health statistics,” https://www.bls.gov/opub/hom/pdf/homch9.pdf.

12 “OSHA injury and illness recordkeeping and reporting requirements” (U.S. Department of Labor, Occupational Safety and Health Administration), https://www.osha.gov/recordkeeping/index.html. OSHA differentiates between (1) cases involving days away from work or days of restricted work activity (or both) beyond the day of injury or onset of illness and (2) other recordable cases that do not result in lost work time.

Michelle A. Dressner is an economist in the Office of Compensation and Working Conditions, U.S. Bureau of Labor Statistics.

A look at violence in the workplace against psychiatric aides and psychiatric technicians, Monthly Labor Review, March 2015.