Job openings, hires, and separations rise, but at a slower pace, in 2016

The JOLTS sample comprises about 16,000 nonfarm establishments from all 50 states and the District of Columbia. JOLTS data measure job openings, hires, total separations, quits, layoffs and discharges, and other separations on a monthly basis. The survey provides estimates of labor demand and worker flows by North American Industry Classification System (NAICS)1 select two-digit supersector and by the four major census regions.2

This article discusses JOLTS estimates for 2016, compares them with estimates for 2015, and analyzes how these measures have performed since the most recent recession.3 JOLTS data from 2016 are first compared with JOLTS data from previous years by data element: job openings, hires, total separations, quits, layoffs and discharges, and other separations. JOLTS data are then analyzed and compared with other statistical series. Comparisons frequently include November 2007, the month before the most recent recession started, and June 2009, the last month of the most recent recession. Levels at or above 2007 values for procyclical data elements—job openings, hires, and quits—suggest the industry or region has recovered. Procyclical data elements generally increase during economic expansions and decline during economic contractions. Countercyclical series decline during expansions and increase during contractions. Levels at or below 2007 values for the countercyclical data elements—layoffs and discharges—suggest recovery as well.

In line with its procyclical nature, the level of job openings has increased since the end of the recession. Job openings reached a series high of 6.0 million in July 2016, indicating continued improvement on the demand side of the labor force. (See figure 1.) The 128.1-percent increase in job openings between June 2009 and December 2016 followed a 41.1-percent decline during the recession. Job openings was the first procyclical JOLTS measure to return to the prerecession level (4.2 million); this occurred in March 2014, and the data series has remained above that level since then. Average monthly levels of job openings have increased steadily each year since 2009, but the growth in 2016 slowed to 5.2 percent, compared with 17.6 percent in 2015.

Job openings by industry and region

At the industry level, the largest increases in average monthly job openings from 2015 to 2016 were in construction (32.0 percent); arts, entertainment, and recreation (26.7 percent); nondurable goods manufacturing (21.6 percent); federal government (21.6 percent); other services (18.8 percent); wholesale trade (14.1 percent); and retail trade (11.5 percent). Mining and logging and information experienced the largest decreases in job openings, 24.4 percent and 22.3 percent, respectively. In the regions, job openings increases ranged from 1.5 percent in the South to 8.3 percent in the West. (See table 1.)

Like job openings, hires is a procyclical measure whose level has increased each year since the end of the recession. Like the growth of openings, growth in hires slowed in 2016. (See figure 2.) Hires began dropping before the recession and continued to decline during the recession. Increases during the recovery caused the 2016 level to be about the same as the level before the decline began. In 2016, the number of hires surpassed the November 2007 level (5.2 million) and was at or above that level in 9 out of 12 months.

The count of hires is a flow measure, so the monthly hires (not seasonally adjusted) can be accumulated to create an annual total. In 2016, annual hires rose for the seventh consecutive year, reaching 62.7 million (43.5 percent of annual employment), an increase of 1.0 percent over the 2015 annual hires of 62.1 million. This growth showed a slower increase compared with the more robust 2015, when hires increased by 5.8 percent. (See figure 3.)

Hires by industry and region

In 2016, the growth in hires varied by industry—13 out of 19 industries had more hires than in 2015. The largest increases in annual hires levels from 2015 to 2016 were in state and local government, excluding education (6.1 percent), professional and business services (4.9 percent), and state and local government education (4.1 percent). Annual hires levels from 2015 to 2016 dropped in five industries, with the largest declines occurring in other services (−11.5 percent), finance and insurance (−4.2 percent), and retail trade (−4.1 percent). Growth in hires in the four census regions varied from a 0.9-percent decline in the South to a 2.9-percent increase in the Northeast. (See table 2.)

Total separations by industry and region

Quits by industry and region

In 2016, the growth in quits varied by industry—15 out of 19 industries had more quits than in 2015, while 4 had fewer quits. Within the industries, the largest increases in annual quits levels between 2015 and 2016 were in arts, entertainment, and recreation (25.7 percent); professional and business services (15.1 percent); nondurable goods manufacturing (14.8 percent); and state and local government, excluding education (11.8 percent). The largest declines occurred in mining and logging (−9.6 percent), other services (−5.2 percent), and information (−4.4 percent). In the regions, increases in quits ranged from 3.7 percent in the South to 12.6 percent in the West. (See table 4.)

Layoffs and discharges by industry and region

Other separations by industry and region

Job openings and nonfarm payroll employment from the Current Employment Statistics (CES) survey tend to follow a similar pattern, rising and falling together during upturns and downturns of the business cycle, because of their procyclical nature.6 (See figure 12.)

Between December 2000, when the JOLTS program began, and August 2009, the Beveridge Curve followed a fairly constant pattern. From the start of the most recent recession in December 2007 through the end of 2009, the position of the economy along the Beveridge Curve trended lower and to the right as the job openings rate declined and the unemployment rate rose. However, in September 2009, the curve began to shift up and to the right of the historical curve, following a new path as the job openings rate increased and the unemployment rate decreased. The trajectory continued to the right of the original curve throughout 2016. In 2016, points on the Beveridge Curve moved slightly to the left because job openings were 3.8 in January and 3.7 in December. However, the unemployment rate edged down from 4.9 percent in January to 4.7 percent in December, indicating that the economy is still in an expansionary period.

The shift of the Beveridge Curve since September 2009 might be due to both cyclical and structural factors. In 2012, Bart Hibijn and Ayşegül Şahin found that the displacement of a large part of the labor force during the recession resulted in a decline in efficiency in matching workers with jobs.8 This decline, together with the extension of unemployment insurance benefits during the recession, led to the shift.9 In 2014, Alan Krueger, Judd Cramer, and David Cho found that long-term unemployment increased because of fewer job openings during the recession. These authors theorized that the long-term unemployed have a historically slower rate of reemployment, accounting for the shift.10 Conversely, Peter A. Diamond and Şahin reasoned that a shift in the Beveridge Curve following a recession is natural and should be interpreted as a cyclical pattern.11 The consensus among these researchers is that the current shift is temporary and will eventually return to the original curve as long-term unemployment falls.

The monthly levels and rates of total nonfarm hires have exceeded those of job openings for most of JOLTS history because hires is a full-month measure and job openings is a 1-day snapshot. (See figure 15.) However, following steady growth after the end of the recession, job openings started to grow rapidly in early 2014. At the same time, hires also grew, but at a slower pace than job openings. Job openings exceeding hires may suggest that employers have unmet needs for workers. During the entire year of 2016, job openings exceeded hires while the job openings rate was at or above the hires rate for 11 months of 2016.

The historical dynamic between hires and job openings levels has varied by industry. Hires have almost always been greater than job openings in mining and logging; construction; retail trade; real estate and rental and leasing; professional and business services; arts, entertainment, and recreation; accommodation and food services; and other services. In other industries (durable goods manufacturing; wholesale trade; transportation, warehousing, and utilities; and educational services), the dynamic has gone back and forth over time, with hires exceeding job openings in some months and job openings exceeding hires in other months. Job openings has regularly exceeded hires in information; finance and insurance; and health care and social assistance. 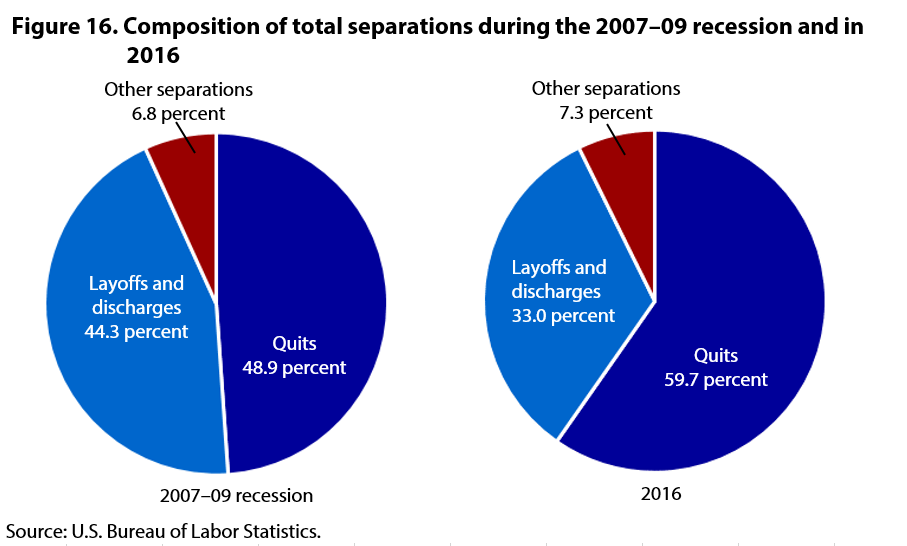 JOLTS data for 2016 show that the labor market continued to improve, but at a slower pace than in 2015 and 2014. The number of job openings increased to the highest levels since the series began in 2000, indicating a rise in the demand for labor. However, in 2016 the growth in average monthly job openings slowed to 5.2 percent, compared with 17.6 percent in 2015. Annual hires also had smaller increases, up by 1.1 percent in 2016 versus 5.8 percent in 2015. Annual quits grew steadily over the year, increasing by 7.0 percent, which was slightly less than the 10.3-percent increase in 2015. Layoffs and discharges fell slightly and remained below prerecession levels. Although the increases were smaller in 2016, the growth of jobs and worker flows signaled continued confidence among employers and workers. Employers laid off fewer workers and hired additional workers. Workers were assured enough of job prospects and had sufficient incentives to leave their current positions.

5 According to the Handbook of methods, “Job openings are a stock, or point-in-time, measurement on the last business day of each month. Only jobs still open on the last day of the month are counted. For the same reason that job openings are not be cumulated throughout each month, annual figures for job openings are not created by summing the monthly estimates. Because hires and separations are flow measures and are cumulated over the month with a total reported for the month, these annual figures are calculated by summing the monthly estimates.” From Handbook of methods, chapter 18, “Job Openings and Labor Turnover Survey,” p. 7, https://www.bls.gov/opub/hom/pdf/homch18.pdf.

10 Alan Krueger, Judd Cramer, and David Cho, “Are the long-term unemployed on the margins of the labor market?” Brookings papers on economic activity, Spring 2014, https://www.brookings.edu/bpea-articles/are-the-long-term-unemployed-on-the-margins-of-the-labor-market/.

12 Gross worker flows refer to the net changes in the number of people employed and unemployed from month to month. See U.S. Bureau of Labor Statistics, Current Population Survey, https://www.bls.gov/cps/cps_flows.htm.

Blanka M. Thibaud is an economist in the Office of Employment and Unemployment Statistics, U.S. Bureau of Labor Statistics.

Unemployment holds steady for much of 2016 but edges down in the fourth quarter, Monthly Labor Review, March 2017.