In 2015, the overall unemployment rate for the United States was 5.3 percent; however, the rate varied across race and ethnicity groups. The rates were highest for American Indians and Alaska Natives (9.9 percent) and for Blacks (9.6 percent) and lowest for Asians (3.8 percent). The jobless rate was 4.6 percent for Whites, 5.7 percent for Native Hawaiians and Other Pacific Islanders, and 8.4 percent for people of Two or More Races. The rate for people of Hispanic or Latino ethnicity was 6.6 percent, higher than the rate of 5.0 percent for non-Hispanics.

Labor market differences among the race and ethnicity groups are associated with many factors, not all of which are measurable. These factors include variations across the groups in educational attainment; the occupations and industries in which the groups work; the geographic areas of the country in which the groups are concentrated, including whether they tend to reside in urban or rural settings; and the degree of discrimination encountered in the workplace.

This report describes the labor force characteristics and earnings patterns among the largest race and ethnicity groups living in the United States—Whites, Blacks, Asians, and Hispanics—and provides detailed data through a set of supporting tables. The report also includes a limited amount of data for American Indians and Alaska Natives, Native Hawaiians and Other Pacific Islanders, people who are of Two or More Races, detailed Asian groups, and detailed Hispanic ethnicity. Among the detailed Hispanic ethnicity categories are: Mexican, Puerto Rican, Cuban, Central and South American, and Other Hispanic or Latino. The latter two categories are expanded into five additional categories—Salvadoran, Other Central American, South American, Dominican, and Other Hispanic or Latino. Estimates for these additional groups are not included in all tables because of their relatively small sample sizes.

The data are obtained from the Current Population Survey (CPS), a monthly survey of 60,000 households that is a rich source of information on the labor force. For definitions of terms and concepts used in this report, see the technical notes. Additional information about the CPS can be found at www.bls.gov/cps/documentation.htm.

The following sections highlight some of the major findings on the labor force characteristics of race and ethnicity groups in 2015.

Composition of the labor force

Among Asians participating in the labor force, the largest group was Chinese, making up 22 percent of all Asians. Asian Indians made up 21 percent, followed by Filipinos (17 percent), Vietnamese (10 percent), Koreans (8 percent), and Japanese (5 percent). The remainder—17 percent—were classified as Other Asian, which includes individuals who reported an Asian group not listed above—such as Pakistani, Cambodian, and Hmong—and those who reported two or more Asian groups. (See table 2.)

Among the race and ethnicity groups, Native Hawaiians and Other Pacific Islanders and Hispanics had the highest labor force participation rates, at 66.6 percent and 65.9 percent, respectively. American Indians and Alaska Natives (60.6 percent) and Blacks (61.5 percent) had the lowest participation rates. The participation rates were 62.8 percent each for Asians and Whites, and 64.5 percent for people of Two or More Races. (See tables 1, 2, 3, 4, 4A, and chart 1.) 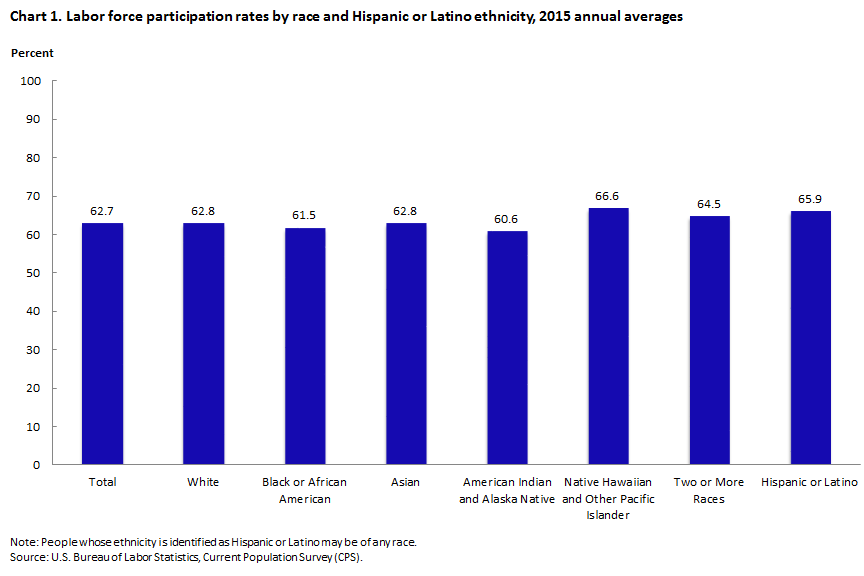 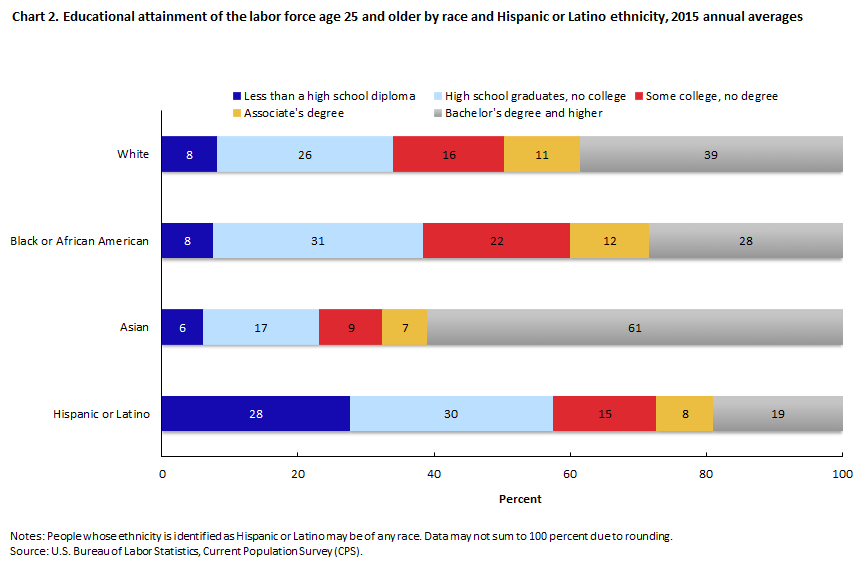 For all major race and ethnicity groups, higher levels of education are generally associated with a greater likelihood of employment and a lower likelihood of unemployment. Nonetheless, at nearly every level of education, Blacks and Hispanics were more likely to be unemployed than were Whites and Asians. (See table 6.)

Individuals with higher levels of education are typically more likely to be employed in higher-paying jobs—such as those in management, professional, and related occupations—than are individuals with less education. For those age 25 and older, median earnings for all major race and ethnicity groups increased with educational attainment. However, Blacks and Hispanics had lower earnings than Whites and Asians with at least some college education. (See table 17.) 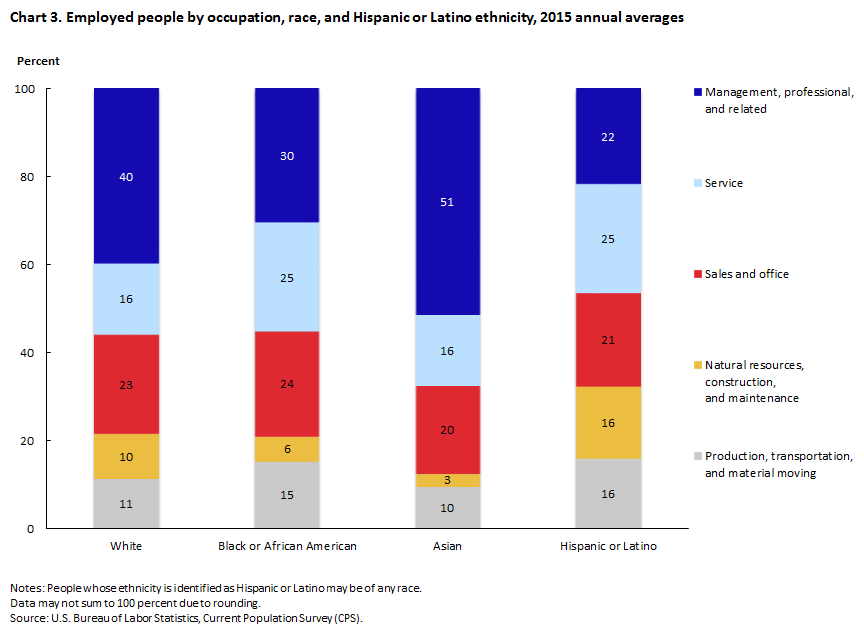 Among employed men, Hispanics were more likely to work in the construction industry (19 percent) than were Whites (13 percent), Blacks (7 percent), or Asians (3 percent). Employed Black men were more likely than other employed men to work in transportation and utilities (12 percent). Nineteen percent of employed Asian men worked in professional and business services, higher than the shares of Whites (13 percent), Hispanic (12 percent), and Black men (11 percent). A large share of employed women in all race and ethnicity groups worked in education and health services—Blacks (41 percent), Whites (36 percent), Asians (32 percent), and Hispanics (29 percent). (See table 9.)

Among Asian families, 89 percent had an employed family member, compared with 86 percent of Hispanic families, 80 percent of White families, and 78 percent of Black families. (See table 10.) 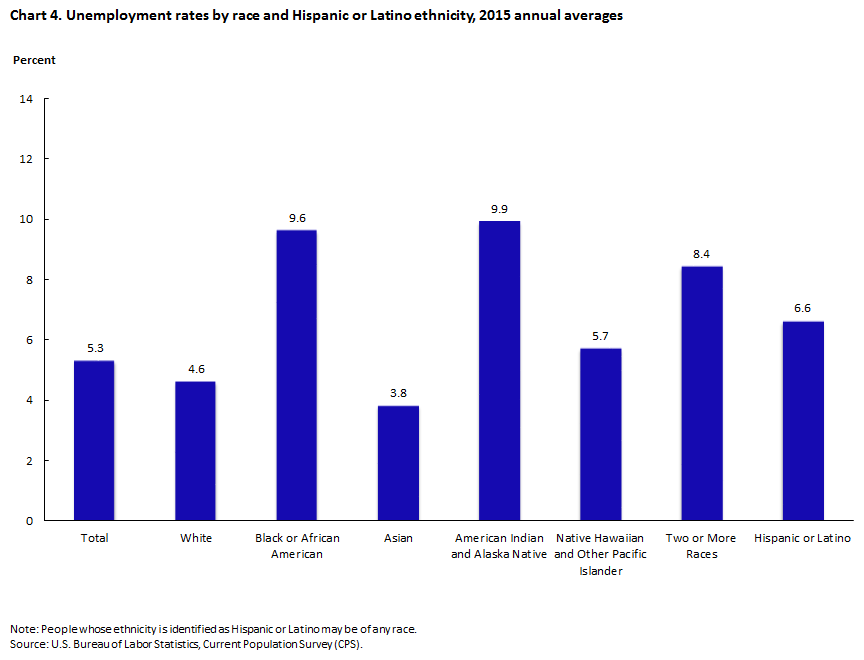 Not in the labor force

Median weekly earnings for women by race and ethnicity groups were fairly close across some occupations. For example, among women in service occupations, the earnings were $489 for Asians, $467 for Whites, $440 for Blacks, and $430 for Hispanics. By contrast, in management, professional, and related occupations, the earnings of Asian women were higher than those for women in other race and ethnicity groups.

The estimates in this report were obtained from the Current Population Survey (CPS), a national monthly sample survey of approximately 60,000 eligible households that provides a wide range of information on the labor force, employment, and unemployment. Earnings data are collected from one-fourth of the CPS monthly sample. The survey is conducted for the U.S. Bureau of Labor Statistics (BLS) by the U.S. Census Bureau using a scientifically selected national sample with coverage in all 50 states and the District of Columbia.

Material in this report is in the public domain and may be reproduced without permission.

For more information on the data provided in this report, contact the U.S. Bureau of Labor Statistics, Division of Labor Force Statistics. Email: cpsinfo@bls.gov; Telephone: (202) 691-6378.

Civilian noninstitutional population. Included are people 16 years of age and older residing in the 50 states and the District of Columbia who are not confined to institutions, such as nursing homes and prisons, and who are not on active duty in the Armed Forces.

Employed. Employed people are all those who, during the survey reference week (which is generally the week including the 12th day of the month), (a) did any work at all as paid employees; (b) worked in their own business or profession or on their own farm; (c) worked 15 hours or more as unpaid workers in a family member’s business. People who were temporarily absent from their jobs or businesses because of illness, vacation, labor dispute, or another reason also are counted as employed.

Unemployed. The unemployed are people who had no employment during the reference week, were available for work (except for temporary illness), and had made specific efforts to find employment sometime during the 4-week period ending with the reference week. People who were waiting to be recalled to a job from which they had been laid off need not have been looking for work to be classified as unemployed.

3.  Reentrants, people who previously worked but who were out of the labor force prior to beginning their job search.

Civilian labor force. This group comprises all people classified as employed or unemployed in accordance with the criteria described above.

Unemployment rate. This rate is the number unemployed as a percentage of the civilian labor force.

Labor force participation rate. This rate is the labor force as a percentage of the population.

Employment–population ratio. This ratio is the number of employed as a percentage of the population.

Not in the labor force. Included in this group are all people in the civilian noninstitutional population who are neither employed nor unemployed. People marginally attached to the labor force are those individuals who are not in the labor force who wanted and were available for work and had looked for a job sometime in the prior 12 months (or since the end of their last job if they held one within the past 12 months). They were not counted as unemployed because they had not searched for work in the 4 weeks preceding the survey.

Discouraged workers, a subset of the marginally attached, were not looking for work because they believed no jobs were available for them.

White, Black or African American, Asian, American Indian and Alaska Native, and Native Hawaiian and Other Pacific Islander. In accordance with the Office of Management and Budget guidelines, these terms are used to describe the race of people. Beginning in 2003, people in these categories are those who selected that race group only. Those who identify multiple race groups are categorized as people of Two or More Races. (Previously, people identified a group as their main race.) People who identified themselves as Asian are further classified as Asian Indian, Chinese, Filipino, Japanese, Korean, Vietnamese, or Other Asian. The Other Asian category includes individuals of a group not listed in the CPS—such as Pakistani, Hmong, and Cambodian—and those who reported two or more Asian groups. Estimates for American Indians and Alaska Natives, Native Hawaiians and Other Pacific Islanders, and people of Two or More Races are not shown separately in all tables because the number of survey respondents is too small to develop estimates of sufficient quality. In the enumeration process, race is determined by the household respondent. More information on the 2003 changes to questions on race and Hispanic ethnicity is available on the BLS website at www.bls.gov/cps/rvcps03.pdf.

Usual weekly earnings. Data represent earnings before taxes and other deductions, and include any overtime pay, commissions, or tips usually received (at the main job, in the case of multiple jobholders). Earnings reported on a basis other than weekly (for example, annual, monthly, or hourly) are converted to weekly. The term “usual” is as perceived by the respondent. If the respondent asks for a definition of usual, interviewers are instructed to define the term as more than half the weeks worked during the past 4 or 5 months. Data refer to the sole or primary job of wage and salary workers (excluding all self-employed people, regardless of whether their businesses were incorporated).

Median earnings. These figures indicate the value that divides the earnings distribution into two equal parts, one part having values above the median and the other having values below the median. The medians shown in this publication are calculated by linear interpolation of the $50 centered interval within which each median falls.

Family. A family is defined as a group of two or more people residing together who are related by birth, marriage, or adoption; all such people are considered as members of one family. Families are classified either as married-couple families or as families maintained by women or men without spouses.

Reliability of the estimates

Statistics based on the CPS are subject to both sampling and nonsampling error. When a sample, rather than an entire population, is surveyed, there is a chance that the sample estimates may differ from the true population values they represent. The component of this difference that occurs because samples differ by chance is known as sampling error, and its variability is measured by the standard error of the estimate. There is about a 90 percent chance, or level of confidence, that an estimate based on a sample will differ by no more than 1.6 standard errors from the true population value because of sampling error. BLS analyses are generally conducted at the 90 percent level of confidence.

All other types of error are referred to as nonsampling error. Nonsampling error can occur for many reasons, including the failure to sample a segment of the population, inability to obtain information for all respondents in the sample, inability, or unwillingness of respondents to provide correct information, and errors made in the collection or processing of data.

A more detailed discussion of the reliability of data from the CPS and information on estimating standard errors is available online at www.bls.gov/cps/documentation.htm#reliability.