Import and export prices increase in 2009 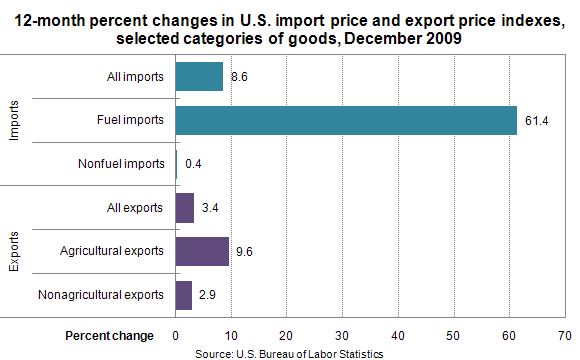 Prices for U.S. imports trended up over most of 2009, rising 8.6 percent overall for the year. In 2009, import prices rebounded from a 10.1-percent decline in 2008, the largest calendar-year drop since the index was first published in 1982. Fuel prices were the primary contributor to both the decline in overall import prices for 2008 and the subsequent increase in 2009.

Although the price trend for agricultural exports was mixed in 2009, the index increased 9.6 percent overall, after falling 10.9 percent in 2008. The 2008 drop was the largest calendar-year decline in agricultural prices since the index began in 1985. Higher prices for soybeans and corn drove the increase in overall export prices in 2009.

Prices for nonagricultural exports increased 2.9 percent over the past year following a 2.2-percent decline in 2008.