The number of wage and salary workers belonging to unions declined by 771,000 to 15.3 million in 2009, largely reflecting the overall drop in employment due to the recession. In 1983, the first year for which comparable union data are available, there were 17.7 million union workers. 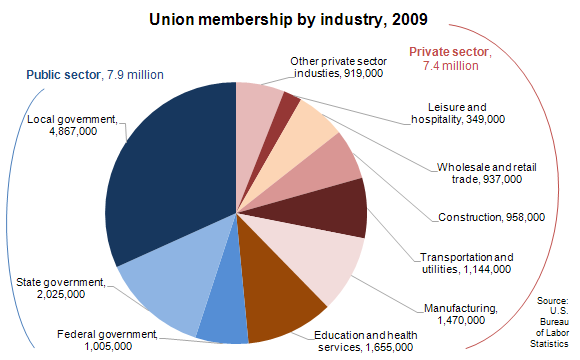 In 2009, 7.9 million public sector employees belonged to a union, compared with 7.4 million union workers in the private sector. The union membership rate for public sector workers (37.4 percent) was substantially higher than the rate for private industry workers (7.2 percent).

Within the public sector, local government workers had the highest union membership rate (4.9 million members, or a rate of 43.3 percent). This group includes workers in heavily unionized occupations, such as teachers, police officers, and fire fighters.

These data on union membership are from the Current Population Survey. Unionization data are for wage and salary workers. Find out more in "Union Members — 2009" (HTML) (PDF), news release USDL-10-0069.