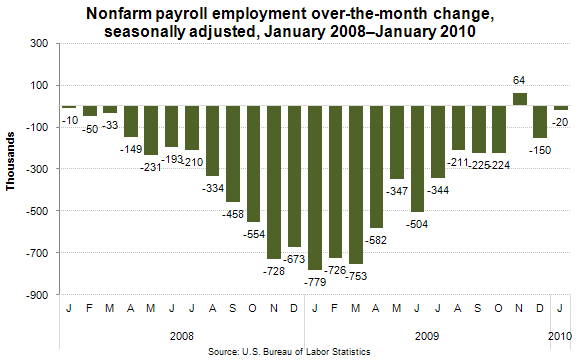 Construction employment declined by 75,000 in January, with nonresidential specialty trade contractors (‑48,000) accounting for the majority of the decline. Since December 2007, employment in construction has fallen by 1.9 million.

In January, transportation and warehousing employment fell by 19,000, due to a large job loss among couriers and messengers (‑23,000).

These employment data are from the Current Employment Statistics program and are seasonally adjusted. Data for the most recent two months are preliminary. Monthly revisions result from additional sample reports and the monthly recalculation of seasonal factors. The annual benchmark process also contributed to these revisions. To learn more, see "The Employment Situation — January 2010" (HTML) (PDF), news release USDL-10-0141.