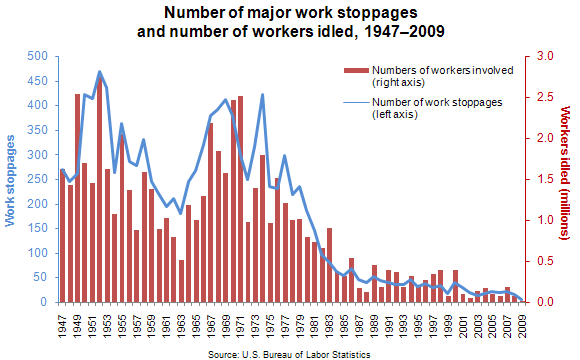 The largest work stoppage in 2009 in terms of number of days and total workdays idle was between Bell Helicopter Textron and the United Auto Workers Local 218, lasting 27 workdays with 2,500 workers accounting for 67,500 lost workdays. The largest work stoppage beginning in 2009 in terms of number of workers was between the Southeastern Pennsylvania Transportation Authority and the Transport Workers Union Local 234 with 5,500 workers involved in the work stoppage.

These data are from the BLS Work Stoppages Program. To learn more, see "Major Work Stoppages in 2009" (HTML) (PDF), news release USDL 10-0170. The major work stoppages series, which dates back to 1947, covers strikes and lockouts involving 1,000 or more employees and lasting at least one shift.