On a seasonally adjusted basis, the January Consumer Price Index for All Urban Consumers (CPI-U) rose 0.2 percent. Over the last 12 months, the index increased 2.6 percent before seasonal adjustment (as shown on the chart). 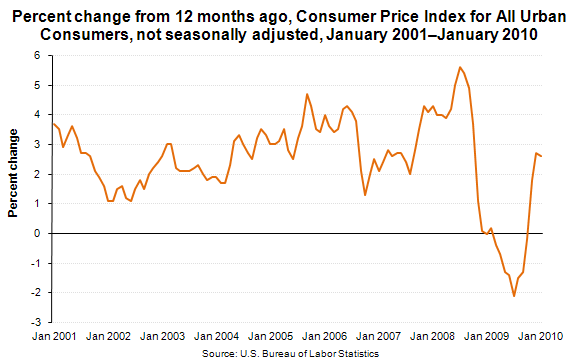 The seasonally adjusted increase in the all items index was due to a rise in the energy index. An increase in the gasoline index was the main factor, and the indexes for fuel oil and natural gas rose as well, though the electricity index declined.

The food index increased in January, with the food at home component posting its largest increase since September 2008. Sharp increases in the indexes for dairy and related products and for fruits and vegetables accounted for most of the increase.

The index for all items less food and energy fell 0.1 percent in January. This decline was largely the result of decreases in the indexes for shelter, new vehicles, and airline fares. In contrast, the medical care index posted its largest increase since January 2008, and the index for used cars and trucks increased significantly for the sixth month in a row.

Over the last 12 months, the energy index has risen 19.1 percent, with the gasoline index up 51.3 percent but the index for household energy down 3.5 percent. The food index has declined 0.4 percent with the food at home index down 2.0 percent and the index for food away from home up 1.6 percent over the last 12 months. The index for all items less food and energy has risen 1.6 percent over the same period.