Unit labor costs in the fourth quarter of 2009

Unit labor costs in nonfarm businesses decreased 4.7 percent from the same quarter a year ago, the largest four-quarter decline since the series began in 1948. 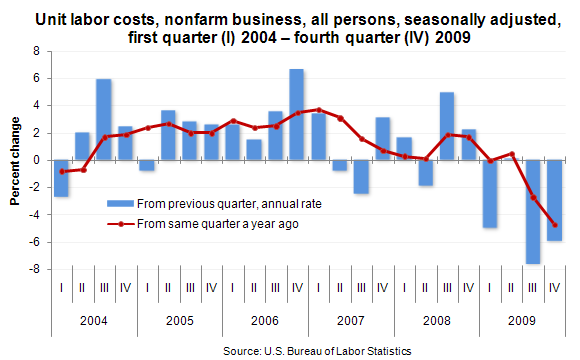 From the previous quarter, at an annual rate, unit labor costs in nonfarm businesses fell 5.9 percent in the fourth quarter of 2009, the result of productivity increasing faster than hourly compensation.

The annual average index of unit labor costs declined 1.7 percent from 2008 to 2009, the largest decline in that series.

These data, from the Productivity and Costs program, are seasonally adjusted and are subject to revision. To learn more about productivity, output, hours and related measures, see "Productivity and Costs: Fourth Quarter and Annual Averages 2009, Revised" (HTML) (PDF), news release USDL-10-0255.