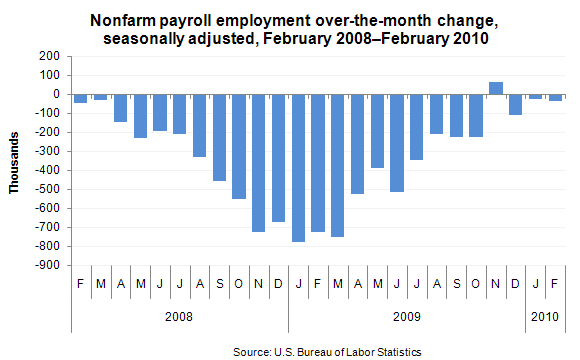 Construction employment fell by 64,000 in February, about in line with the average monthly job loss over the prior 6 months. Since December 2007, employment in construction has fallen by 1.9 million.

Employment in the information industry dropped by 18,000 in February. Since December 2007, job losses in information have totaled 297,000.

In February, employment in the Federal Government edged up. The hiring of 15,000 temporary workers for Census 2010 was partially offset by a decline in U.S. Postal Service employment.

These employment data are from the Current Employment Statistics program and are seasonally adjusted. Data for the most recent 2 months are preliminary. Monthly revisions result from additional sample reports and the monthly recalculation of seasonal factors. To learn more, see "The Employment Situation — February 2010" (HTML) (PDF), news release USDL-10-0256.