Disabled veterans and the labor force

Among veterans who served in Gulf War era II, about 21 percent reported having a service-connected disability. Of these, 80.5 percent were in the labor force, compared with 87.2 percent of nondisabled veterans from this period. 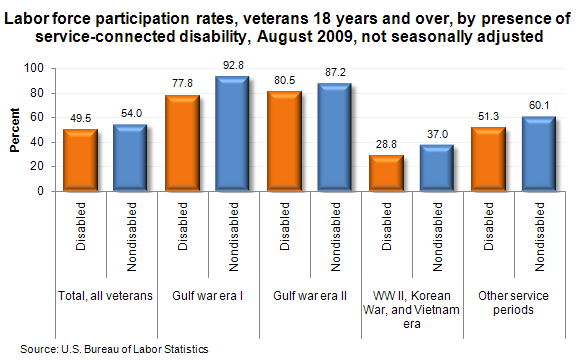 About 18 percent of veterans who served during Gulf War era I reported a service-connected disability. Their labor force participation rate (77.8 percent) was lower than the rate for veterans from the era who did not have a disability (92.8 percent).

Among the 1.4 million disabled veterans of World War II, the Korean War, and the Vietnam era, 28.8 percent were in the labor force in August 2009, compared with 37.0 percent of veterans from these periods who did not have a service-connected disability.

The Current Population Survey (CPS) is the source of these data. In the CPS, veterans are defined as men and women who have previously served on active duty in the U.S. Armed Forces and who were civilians at the time they were surveyed. To learn more, see "Employment Situation of Veterans: 2009," news release (HTML) (PDF) USDL 10-0285.