The unemployment rate for foreign-born workers rose from 5.8 percent in 2008 to 9.7 percent in 2009. The rate also increased among the foreign born in each of the major race and ethnicity groups over that period. 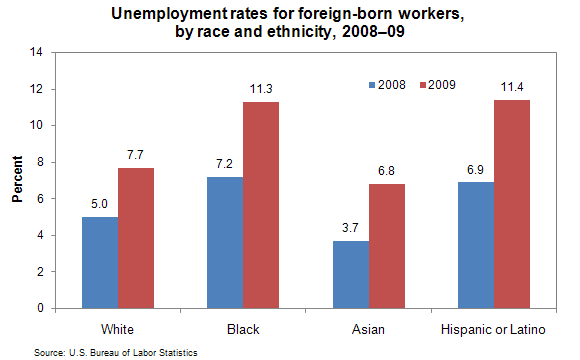 For comparison, the jobless rate for native-born workers increased from 5.8 percent in 2008 to 9.2 percent in 2009. The unemployment rate of the foreign born was higher than that of the native born for the first time since 2003.

Among the major race and ethnicity groups, labor force participation rates of foreign-born whites (59.8 percent), blacks (72.4 percent), and Asians (67.7 percent) were down over the year. The rate for foreign-born Hispanics (70.8 percent) was little changed in 2009. Among the native born, labor force participation rates for all of the major race and ethnicity groups fell over the year.