In January, among the metropolitan areas that are home to universities with teams playing in the regional semifinals of the NCAA men's basketball tournament, Morgantown, West Virginia, registered the largest increase in payroll employment over the past 12 months (+1.7 percent). The largest over-the-year percentage decrease in employment among these areas was San Francisco-Oakland-Fremont, California (‑5.3 percent). 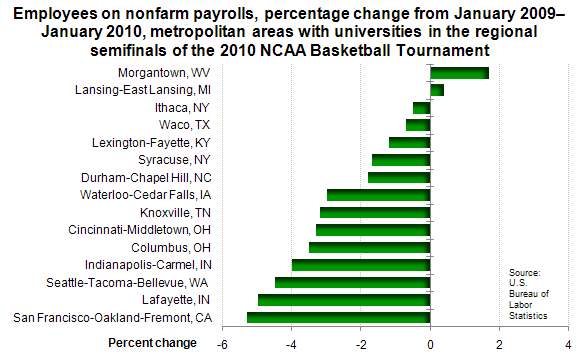 In January, among the 371 metropolitan areas for which nonfarm payroll data were available, 346 areas reported over-the-year decreases in employment, 24 reported increases, and 1 remained unchanged.

These data are from the Current Employment Statistics (State and Metro Area) program. To learn more, see "Metropolitan Area Employment and Unemployment – January 2010" (HTML) (PDF), news release USDL-10-0320. Note that employment data were not available for one metropolitan area with a team in the semifinals: Manhattan, Kansas.