Among the largest U.S. counties, Elkhart County, Ind., located about 100 miles east of Chicago, posted the largest percentage decline from September 2008 to September 2009 (‑14.5 percent). Two-thirds of the employment decline in Elkhart occurred in manufacturing, which lost 10,868 jobs over the year (‑21.6 percent). 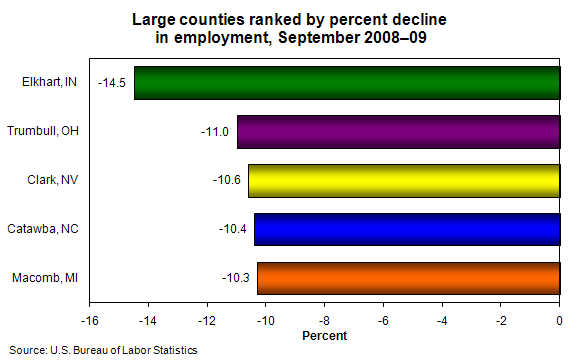 The percentage job decrease for the Nation as whole was 5.3 percent over the same period (September 2008 to September 2009).

The BLS Quarterly Census of Employment and Wages program produced these data, which are preliminary and subject to revision. Data presented here are for all workers covered by State and Federal unemployment insurance programs. The largest counties are those with employment levels of 75,000 or more. To learn more, see "County Employment and Wages: Third Quarter 2009" (PDF) (HTML), news release 10-0393.