In March, total nonfarm payroll employment rose by 162,000. Job growth continued in temporary help services and in health care. Federal government employment increased due to the hiring of temporary workers for Census 2010. Job losses continued in financial activities and in information. 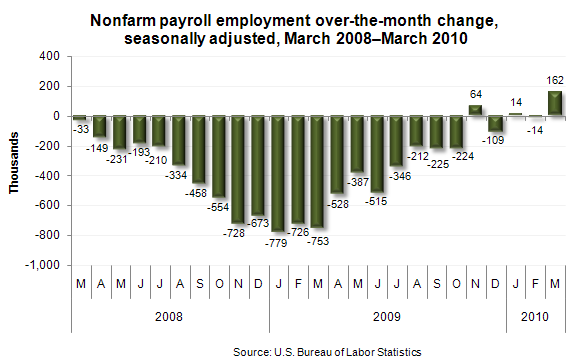 Employment in health care continued to increase in March (27,000), with the largest gains occurring in ambulatory health care services (16,000) and in nursing and residential care facilities (9,000).

In March, employment in federal government was up over the month, reflecting the hiring of 48,000 temporary workers for the decennial census.

Employment in construction held steady (15,000) in March. The industry had lost an average of 72,000 jobs per month in the prior 12 months.

These employment data are from the Current Employment Statistics program and are seasonally adjusted. Data for the most recent two months are preliminary. Monthly revisions result from additional sample reports and the monthly recalculation of seasonal factors. To learn more, see "The Employment Situation—March 2010" (HTML) (PDF), news release USDL-10-0394.