The more than 5-week work stoppage at Bell Helicopter Textron was the longest work stoppage of 2009 and involved approximately 2,500 unionized factory employees accumulating 67,500 days of idleness. 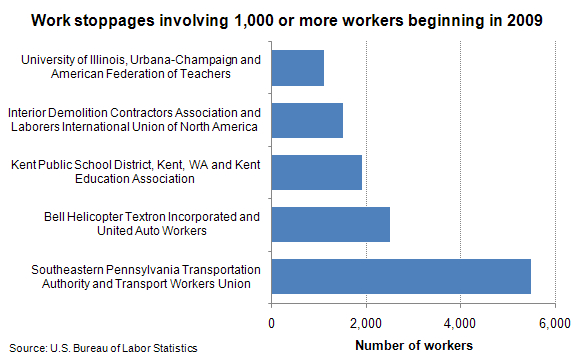 The stoppage began on Monday, June 15, and ended Wednesday, July 22, 2009, after the United Auto Workers (UAW) Local 218, which represents manufacturing workers at the plant, approved a new 4-year contract.

The work stoppage occurred as a result of failed negotiations during the bargaining process for a new 3-year collective bargaining agreement. In mid-June, UAW members rejected the initial contract because of proposed increases in medical costs and plans to outsource some of the work. That rejection led to the strike at several of Bell Helicopter's parts plants in the Dallas-Fort Worth area. In the new contract, the ratification bonus dropped from $4,500 to $3,500 and the length of the contract increased from 3 years to 4 years.

The work stoppage involving the Transport Workers Union and the Southeastern Pennsylvania Transportation Authority (SEPTA) was the largest of 2009 in terms of the number of workers involved. It began Tuesday, November 3, 2009, and ended a week later, on Monday, November 9. The stoppage involved approximately 5,500 union workers accruing 27,500 days of idleness.

The work stoppage was the result of failed negotiations at the bargaining table for a new 5-year contract. The union's concern about the stability of the underfunded pension plan was a key issue during contract talks, with union leaders reluctant to accept an increase in employee pension contributions without confidence in SEPTA's commitment to ensuring the fiscal integrity of the plan. The work stoppage ended with both sides agreeing on a new 5-year contract that included a $1,250 signing bonus and across-the-board pay increases totaling 11.5 percent over 4 years.

These data are from the BLS Work Stoppages Program. To learn more, see "Profiles of Significant Collective Bargaining Disputes of 2009," Compensation and Working Conditions Online, March 2010.